STOCKHOLM, Sweden — In a little over a year, Jonathan Hirschfeld and Max Schiller have managed to turn their fledgling Swedish sneaker brand, Eytys (pronounced '80s' and spelled with Ys in reference to Generation Y), into a growing cult sensation set to generate €2 million (about $2.5 million) in revenue in 2014. This is surprising, considering that, until very recently, Eytys made only one product: a unisex platform sneaker with a significantly thick rubber and cork sole and a minimal upper that looks like a ubiquitous deck shoe. This model, the “Mother,” gleans its maternal name from its “mothership” status as the label’s first foray into footwear.

Although Schiller and Hirschfeld can easily recall their first pair of sneakers — black suede Converse and navy suede shoes by DC, respectively — neither of them associates with what Schiller calls the “sneaker hype scene,” a niche culture obsessed with rare Nike trainers and other limited-release shoes. Nor do they identify with the burgeoning market for luxury sneakers, which has seen Riccardo Tisci reinterpret Nike’s Air Force 1, Maison Martin Margiela launch premium versions of a sneaker originally issued by the German army and Chanel create embroidered, chiffon-wrapped running shoes.

We like to talk about Generation Y and how we’ve grown up with MTV and the Internet.

Instead, Eytys seeks to fill a void for young men and women looking for a versatile, stylish shoe that over-delivers on quality and comfort at an affordable price. Schiller admits he’s somewhat of a recovering eBay addict. He used to feverishly track down Converse and Vans shoes from the 1970s, when they had a more substantial sole. The Mother is Schiller’s idea of a perfect shoe, something that he could buy and wear forever.

“What’s great with sneakers is that when you find your favorite pair, you keep on coming back to them,” he says. Though Schiller acknowledges that the shoes also align with current trends in fashion that veer towards looser fits and androgyny. “There’s a way of power dressing and it’s not masculine or feminine. Wearing bold proportions gives you a certain confidence, like the Mother with its thick white sole.”

A lot of work went into perfecting the sole. While other companies build their rubber soles in layers, Schiller opted to use one rubber mold with air holes in different places to help with weight distribution. He added a cork footbed on top due to his love of Birkenstocks, but also to ensure maximum comfort. 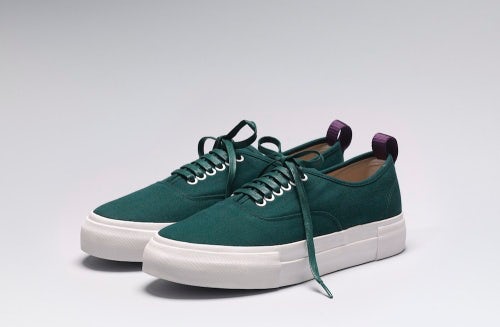 Schiller attributes the unisex nature of the sneakers and Scandinavian fashion to Sweden’s gender-egalitarian political climate. (Last year, the World Economic Forum ranked the country as the fourth most gender-equal in the world). “There’s no reason why clothing or sneakers should be gender-specific,” he says. One of the labels that interests him the most is Céline, which he finds very masculine. It intrigues him how a woman clad in the label looks extremely confident and sexy. “Instead of looking ‘cute’ and feminine, she looks powerful,” comments the designer.

Childhood friends since they were 12 years old, Hirschfeld and Schiller ran their first business in their secondary school years at Stockholm’s Östra Real in 2003. Schiller made sweatshirts and sweatpants with the school’s logo on them. He says the sweatpants in particular were a hit among the “raunchy girls” at the school. “It was this trend with Juicy Couture at the time, we put the school name on the asses,” says Schiller. Hirschfeld was the salesman. “His sense of business has been around for a long time.”

The experience gave them a taste of the difficulties and workload involved in owning a brand — even a small one. Hirschfeld went to business school at the University of Stockholm, while Schiller began working at the first standalone store of then-burgeoning Swedish label Acne. Schiller’s experience during the early days of Acne was an education in and of itself. He says working under creative director Jonny Johannson was “the best school in the world.” Schiller eventually moved to Paris, where he helped build the foundation of the label’s French operations.

Jonathan Hirschfeld left university early to pursue an investment banking career at Crédit Agricole. Meanwhile, Schiller’s education at Acne continued and he found himself helping Jonny Johansson design the company’s menswear line, where he honed his predilection for pared-down style. “If you work somewhere for a long time, the inspiration and the references become a part of your own aesthetic,” he explains. But one of the biggest lessons he learnt was the need to balance creative expression with the demands of running a sustainable business. “Jonny always wanted to surprise people and always wants to do crazy things, but he didn’t forget to always have a foot in the business,” says Schiller. “They always used the tagline ‘art/industry,’ which meant to be able to do exciting, creative things, but always respect the business side. That’s something that I took with me.”

In 2012, Schiller decided to start Eytys on a whim. As he puts it: “The idea came and I quit a week after.” The brand began as a partnership between him, Jonathan Hirschfeld and Charlie Hedin, Schiller’s high school friend who also worked at Acne. However, Hedig left the start-up shortly after.

Eytys has no investors. Its seed capital came from Hirschfeld and Schiller themselves, who each put about 70,000 kr (about $10,000) of their own money into the business, supplemented by a loan of about 60,000 kr from a state-run lender. Most of the money went into producing samples and the first collection. “I think we planned it and in a good way,” says Hirschfeld. “We’re not big spenders. We tried to be as focused as possible in the beginning and we’ve taken that cost-effectiveness with us as we’ve grown.”

Indeed, being smart with cash flow is perhaps one of the greatest secrets to the young brand’s success. Eytys has also worked out a sustainable ordering system on the factory and consumer side.

Eytys launched in April 2013 with just 25 stockists. “We want to sell in stores that we like,” says Hirschfeld. “So we approached the stores that we knew and liked and quite a few of them were keen on Eytys and supported us from the start.” The inaugural season wasn’t without hiccups, however, the biggest being when the cargo ship MOL Comfort, which was carrying their entire first collection, broke in half and sunk in the middle of the Indian Ocean.

“There were a couple of weeks where we didn’t know if we were going to survive or not,” Hirschfeld says of the incident. It also left Schiller equally nervous, so much that he actually took up smoking during the time. Thanks to insurance and the patience and support of their first stockists, Eytys was able to reproduce and successfully ship their first shoes.

The Autumn 2014 series did so well that by Spring 2014, Eytys had more than doubled its wholesale accounts to 60 stockists, including influential stores like Dover Street Market, Colette and LN-CC. By Autumn 2015, that number will be 100. It’s controlled growth, as Hirschfeld wants to first expand the volume of business they do with their existing stockists and, along with Schiller, vets every store on an individual basis before deciding whether or not their brand is a good fit for their shelves. 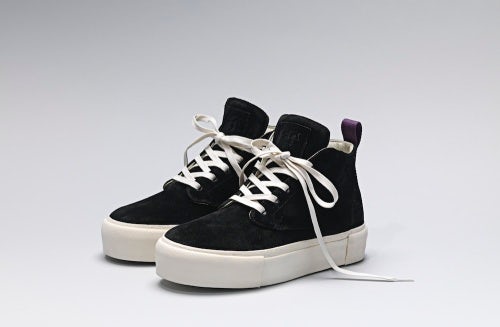 In August, Eytys opened its first store in Stockholm. Like the birthing of the label itself, it too was an impulsive decision, one that stemmed from finding an office space and having enough extra room to transform it into a standalone shop. “It was a good time for us to curate a physical space,” says Hirschfeld. “We came so far with what we wanted to do brand-wise and aesthetic-wise, so we thought it’d be fun and interesting to do it."

Located on an unassuming block between two Bangladeshi restaurants in central Stockholm’s Hötorget neighbourhood, the white-walled, marble-floored space is outfitted with set-in shelving and modern furniture designed in collaboration with cabinetmaker Axel Wannberg. Wannberg’s portfolio notes that inspiration for the space includes 1980s post-modernists Shiro Kuramata and Ettore Sottsass and the colour palette of American painter Agnes Martin. Pottery from Jessica Hans, books from Konst-ig and a selection of gear by Swedish rapper and producer Yung Lean magnifies the eclectic vibe.

This culture of convergence — Sad Boys merchandise and vintage Swatch watches, skateboards and MTV — is how Eytys defines itself. “We like to talk about Generation Y and how we’ve grown up with MTV and the Internet and this has just given us a steady flow of information,” says Schiller. The company’s newest model, a padded, leather-lined high-top called the Odyssey, isn’t just a reference to Stanley Kubrick, the Voyager 1 space probe or the continuation of the brand’s own journey, but also late 1970s disco band Odyssey, best known for its 1977 hit single, “Native New Yorker.”

In making the shoe, Schiller researched all the padded high-tops on the market and found them too busy. I’ve never been looking for the most crazy sneakers or the most wild things, I just wanted the most perfect, basic sneakers,” he says. “We’re always going to find ways to re-work the shoes and find interesting collaborations, but it’s not on a regular basis.” This season also saw the launch of new versions of the Mother and Odyssey sneakers with stark, black soles, for Eytys’ fans whose personal style veers towards the darker end of the colour spectrum.

As Eytys has no investors — a fact that HIrschfeld is proud of — it affords them the freedom to do “what feels right.” The top priority at the moment is building on their current market momentum, while establishing a plan for longevity. “This is something that we wanna do for a long time.”