KYOTO, Japan — The Nishijin textile district in the north of Kyoto was established over 1200 years ago. Today, the relatively compact area covers only a few blocks just northwest of the city’s busy Imadegawa-Horikawa intersection. But there are no sprawling industrial factories here; no plumes of smoke. In fact, it’s hard to identify the mills interspersed between the traditional wooden machiya houses.

Located down a nondescript side road stands one of the oldest enterprises in the city: Hosoo, a textiles mill that has been passed down through twelve generations of its founding family. Today, the mill is run by director Masataka Hosoo, 37, who is accompanied to work most days by his 86-year-old grandmother. In the showroom, a framed photograph of her receiving a hug from Pharrell Williams hangs next to an image of her and Caroline Kennedy. Such is Hosoo’s cultural significance to Kyoto that touring celebrities, politicians and ambassadors are often brought to visit. 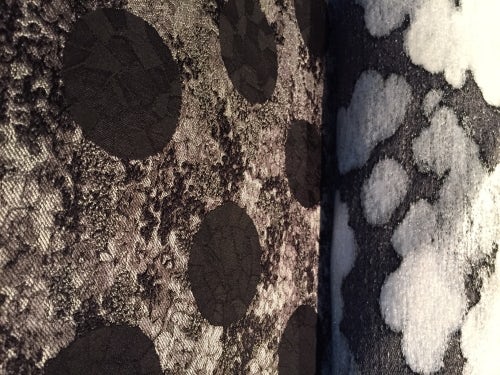 The mill was founded in 1688, when it was kept busy weaving traditional kimonos for Shogun warriors and samurai from the elite Tokugawa clan. Nowadays, the kimono business still exists, but it is nothing compared to what it once was, says Masataka Hosoo. “The market for traditional kimonos has diminished by 90 percent,” he says frankly. To survive in such shifting markets, Masataka realises he needs to keep the mill on its toes. “In the crafts world there is a feeling that tradition is not enough. You need to diversify. You can’t rest,” he says. Together, Masataka and his team are diversifying into three key new areas of business: art, fashion and interiors.

Dressed in an artfully crumpled pale grey linen suit, worn unbuttoned with a t-shirt, Masataka is the picture of the affable, time-zone-hopping entrepreneur. By his side is Hosoo’s Parisian project manager, Benito Cachinero;, immaculate in a three-piece suit and tie. Both men have a vision that reaches far beyond the horizon of the nearby Hokuzan mountains. “We work directly with our clients, no distributors,” says Masataka, acknowledging that the pair’s straightforward business approach is unusual for most Japanese mills, but incredibly attractive for overseas clients seeking easy communication.

Many of these clients are global luxury brands, who purchase high-end fabrics for their store interiors, a lucrative business for Hosoo. Indeed, the mill has woven speciality textiles for the likes of Louis Vuitton, Christian Dior, and Chanel. “We have probably worked on 40 to 50 Chanel stores and, for Dior, we have made fabrics for 19 interiors,” explains Masataka. Hosoo’s work for fashion houses is due, in part, to their longstanding relationship with architect Peter Marino, who has designed luxury flagships across the world and worked with the mill since 2008. “I like the modernity of the colour mixes,” says Marino. “They always come out looking like a modern painting.” 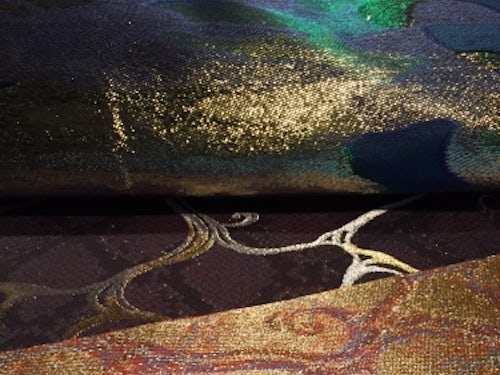 Hosoo also works on unique art projects, which serve to further elevate the rarefied textiles the company produces and were what drew Marino to the mill in the first place. This spring, Hosoo collaborated with American artist Teresita Fernandez to produce a freestanding textile sculpture titled “Nishijin Sky.”

The mill provides textiles directly to fashion designers as well. Their fabrics appeared on the runway at Paris Fashion week in Japanese designer Mihara Yasuhiro’s A/W12 and A/W13 menswear collections. The Italian designer Luisa Cevese also featured Hosoo’s work in her creations, when she inventively repurposed their cast-off selvedge edges. The edges, despite usually being scrapped, are extremely precious as the fabric is threaded with silver and gold. Hosoo has also partnered with the fashion designer Masaya Kushino to produce stage shoes for Lady Gaga.

The ten craftspeople who work in Hosoo’s mill are a mix, from young fashion school graduates to the mechanical engineer who mans the machines. Masataka points out their most senior technician, who has completed ten years of training. “Designing and programming is the most complicated part,” explains Masataka. On a small screen, graphic dots and crosses denote a pattern, which is coming to life on one of the looms, millimeter by millimetre. All the software has been custom developed for machines and Masataka’s team are as much a part of the design process as they are the manufacturing. The seasonal motifs that are customary in classical kimono designs still provide inspiration. “It's half-half as to if clients know what they want and if they want us to design for them,” says Masataka. 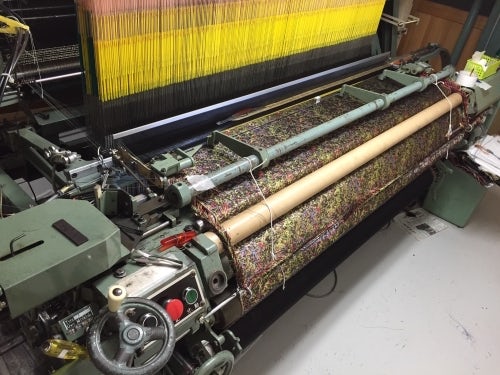 One of Hosoo's looms | Source: BoF

Hosoo’s textile production is a time consuming process, with many stages. “There are maybe twenty process leading up to the finished fabric,” explains Benito Cachinero, “which means there will be twenty master craftsmen involved along the way.” Each craftsperson is careful to keep his knowledge secret in order to protect his livelihood. The technique for creating these highly desirable textiles woven with gold and silver leaf was developed over 300 years ago: today, it will be the job of one craftsman to apply the gold leaf to traditional Japanese washi paper, used for its durability; while another will shred the coated paper and another will dye the silk yarns to match the rich colours of the region. When the shredded metallic paper arrives at Hosoo mill, they don’t ask how it was done, they simply get to work on what they know best.

It’s a long and arduous process. But the team isn’t feeling the pressures of the changing craft industry. At Hosoo mill, they have both tradition and innovation on their side. “It is not a concern because they have secured the market,” says Cachinero, “and because they have the technology. It has not leaked for over a millennium.”