NEW YORK, United States — “My idea for him was a centrefold — a cross of Burt Reynolds and Paul Ryan,” says InStyle editor-in-chief Laura Brown, gazing adoringly at a mini-spread of Stephen Colbert from the magazine’s upcoming September issue, hanging on the wall of her office on a boiling July morning. “He turned up with that suit already.” The suit in question was cut-off well above the knees. Colbert wore it with mischievous aplomb.

The “Late Night” talk-show host is an unlikely choice for a September fashion issue cover, but an even more unlikely one for InStyle. But such is the no-holds-barred attitude of Brown’s new era at the magazine, which she has rapidly revamped since arriving at the helm in August 2016. The Hollywood-focused, fly-over-state-friendly magazine is now slicker, livelier and funnier. “The tone is there,” says Brown. “Voice-y, not shoute-y.” And suddenly not all that off-brand for Colbert.

While he is better known for his political wit than his sartorial sensibilities, Brown wanted to feature him as a “Man of Style” (a column that predated her arrival) not because of his tailoring, but his spirit. He was game for the unconventional shoot, which sees him channelling “Peach Pit, Beverly Hills 90210,” she explains. “He is an absolute national treasure. He makes us feel better.”

Colbert’s InStyle cover is one of five subscriber-only special editions (about 100,000 issues each) that the magazine is releasing for September. The cover queen, however, is pop star and most-followed-human-on-Instagram Selena Gomez, who will grace all the magazine’s newsstand versions.

“Of course, as an editor, it gives you a sense of security to have someone like Selena on your issue, period, let alone September,” says Brown, who only decided to expand the cover editions after looking over the range of photographs in the 450-page issue. 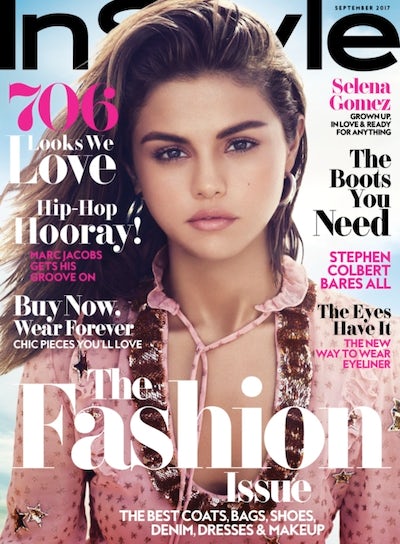 The cover assortment is an apt metaphor for Brown’s fresh approach to InStyle. She told BoF in February that her mantra coming into the job was a literal interpretation of the title: what’s in the zeitgeist. But a new focal point has emerged: inclusivity, but not the activist kind that many women’s magazines are suddenly embracing post-Trump.

“Everyone’s in, just come and do a picture, style something, do a video, everyone’s included,” she says. “Everyone’s going to look great and everyone’s going to make everyone feel better.” Consider it Brown’s own antidote for the times. And it was a compelling invitation for news anchor Katie Couric, actress Laura Dern, Time editor Nancy Gibbs, writer Roxane Gay, actress Megan Mullally, comedian Julie Klausner, novelist Emma Freud, writer Lindy West and burlesque dancer Dita Von Teese. All these women contributed writing to the issue, on topics range from lust to sadness and ageism to career advice.

By engaging high-profile names from fashion and beyond and not relying on the typical magazine profile, Brown is also banking on the fact that each contributor will be more likely to share their content with their own audiences. “I have the cutest network of publicists because I have all of these people promoting what they’ve done for InStyle, from Nancy Gibbs to Selena Gomez,” says Brown. “We get this exponential social promotion.”

“Whether someone sees it online in the magazine or through their own social media people that they are following, all they are hearing about is InStyle,” says Kevin Martinez, senior vice president of fashion at Time Inc. “This is the big secret that we have here.”

Every print feature also comes with a video element, which the magazine says has fuelled a 730 percent increase in video views year-over-year. “It is key to our success, it’s what we’ve seen really big growth in,” says Brown, adding that she manages InStyle’s video strategy down to individual Boomerang shots (an app that turns images into a GIF-like loop) and Instagram Stories posts. “We treat each bit of content — I don’t even use the word content — as a story,” she says.

As for InStyle.com, led by site director Ruthie Friedlander since October, Brown says it has been a slower evolution. “We will be huge without paying for traffic — read into that what you will,” says Brown. “If video is an example of what the potential is, I think the rest will come along.”

Everyone’s in, just come and do a picture, style something, do a video, everyone’s included.

With over 144,000 followers on her own personal Instagram account — which is both charming and approachable, far from the “Devil Wears Prada” editor stereotype — Brown is an expert when it comes to creating shareable, likable content. She has more followers on the powerful platform than any other editor-in-chief in American fashion.

“Everything we do, we start with Laura,” says Martinez. “We talk about her social media strengths, we talk about how she is building that brand through social media. ‘We are the social media fashion magazine, we are the voice of style and this is how you can engage with us in print and digital and video.’”

Despite the decline of print advertising as brands follow consumers online, Martinez is bullish on InStyle’s business turnaround. If the new direction has alienated some older readers, the magazine argues it has picked up younger ones at the same time.

“I’ve never had numbers like this in my entire career,” says Martinez, adding that business from European fashion and luxury advertisers is up 30 percent year-over-year in September, an issue with 251 ad pages. (For context, September 2016’s issue had 270 ad pages.) “In the past maybe that was 8 or 10 percent of the book [were European luxury brands]... We’ve totally changed the DNA within a six-month period,” he says. Total paid and verified subscriptions are up 2.85 percent year-over-year in the first half of 2017 to over 1.5 million.

Meanwhile, parent company Time Inc’s print advertising revenue declined 9 percent in 2016. The company, which posted total revenue of $3.08 billion in 2016, does not break out financials for InStyle, but says InStyle ranks sixth among US magazines in US advertising revenues.

Martinez attributes this to Brown’s approachability, fashion credibility and, of course, her digital presence. “A brand is an extension of who the editor-in-chief is and obviously she came in here as a major social media star,” says Martinez. “Everything is done 360 degrees, she insists on that... People in Milan and Paris and London who are watching this, they want to take advantage of this.”

“If there’s a spend to be made, we’ve done well,” says Brown, describing her “jazz-handing” for brands and agencies. “This is a sales job. I used to say that before I was an editor-in-chief too.”

So is the redesign complete? Brown resists the notion, acknowledging she’s only overseen six full issues. “But we’ve come so far, so quickly,” she says. “My boss came in and looked at it and he was like, yeah, you did what you came to do. You took this thing and you went waboosh [flipping over an imaginary book]. I don’t know how you’ll spell that. Waboosh.”

Editor's Note: An earlier version of this article misstated the number of subscriber-only issues. InStyle is releasing approximately 100,000 issues of each cover, not 10,000.

The Thinking Behind the Latest Round of Layoffs at Time Inc.