NEW YORK, United States — In March 2016, Milk Makeup launched in 50 Sephora stores in the US with dedicated, six-foot gondolas and a “rager” featuring musical performances by Salt-N-Pepa and Santigold. It was an audacious beginning for an upstart company, whose founders had little experience in the cosmetics industry. Milk Makeup is the latest venture hatched by Milk Studios, the photo studio-cum-creative agency that sold another concept, MADE Fashion Week, to WME-IMG in 2015.

The party was a hit, and so was the kit. Milk’s unconventional tool-free product offering, unisex packaging and edgy campaign quickly won over Sephora’s clientele. In just six months, Milk Makeup tripled its doors, expanding to 100 Sephoras as well as 50 Urban Outfitters. Today, the brand shows no signs of cooling; although Milk Makeup declined to disclose sales revenue, the company revealed to BoF it will be in 150 Sephoras by spring 2017 and is already planning its international expansion, starting with Sephora Canada next year. “Milk Makeup has really surpassed our expectations,” says Alison Hahn, vice president of color merchandising at Sephora, who leads the retailer’s colour makeup business. 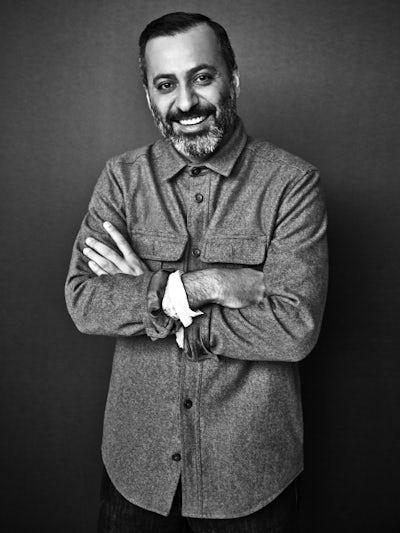 But Milk’s success is less of a surprise when you consider who is behind it. Surpassing expectations has become something of a habit for Mazdack Rassi, Milk’s charismatic co-founder. Rassi got his start in the industry in 1996 when he convinced the owners of what was once the headquarters of the National Biscuit Company to open a photo studio in the building — located on West 14th Street in the then-wasteland of New York's Meatpacking District — and let him run it.

Milk Studios — rather improbably — quickly became a hub for established photographers and designers. Then came MADE fashion week, a showcase for emerging designers that Rassi co-founded with Jenné Lombardo and Keith Baptista in 2009, an equally out-of-the-box endeavour that proved to be a huge success, helping to launch the careers of Alexander Wang, Proenza Schouler, Joseph Altuzarra and others. Meanwhile, Milk has birthed a full-fledged creative agency, pumping out content for large-scale consumer brands, as well as its own editorial platform.

On the decision to move into makeup, Rassi says: “I sat down with my partners at Milk and I said to them, ‘You know, I think we have a new business and that business is our brand. If we do anything, we should create product.” He banded together with his wife, Marie Claire editor Zanna Roberts Rassi, and Georgie Greville — who cofounded Milk’s film production arm, Legs, with husband Geremy Jasper — to start brainstorming. All three were taken with the idea that makeup could be an “accessory that had the power to lift people up and make people feel beautiful,” explains Rassi. Of course, it wasn’t new for a photo studio to create a cosmetics line. Smashbox did it in 1996, finding success with a product offering inspired by the images shot in their studio. But what Rassi and his co-conspirators had in mind was different.

“The makeup line has nothing to do with our studios,” he says. Instead, Milk Makeup was built around another powerful asset: the company's online following of over 1.4 million people, many of whom are young, creative and uninterested in following trends dictated by traditional beauty editors and brands. “We knew how to throw an event and have 5,000 kids lining up outside,” says Rassi. “After 20 years, we already knew how to create these little movements in fashion and music… We saw our community, we felt our community and we decided we wanted to do something for them,” he adds. “That’s how it all started.”

“We knew right away it would play on the concept of fun,” Rassi continues. “The word ‘cosmetics’ scared the hell out of me. It seemed so serious. But when we started throwing around the word makeup, and paint and fun, it became clear that the ethos of the line could be about highlighting who you are, as opposed to covering you up.”

The word ‘cosmetics’ scared the hell out of me. It seemed so serious.

Then Rassi and his co-founders did something unheard of: without so much as a single product, they pitched the idea to Sephora, a client of their studio business. “We sort of showed up at [Sephora’s] doorstep in San Francisco,” recalls Rassi. “We showed them our concept and they just looked at us and said, ‘If you build this, we’re very interested.’”

With Sephora on side, they just needed the product. But Rassi decided not to partner with an established beauty player. “Many think licensing is an easier route, but it can actually be more difficult even when you do have some level of creative control. We wanted to be in control of all aspects of the brand, from product to marketing and everything in between. We believed that our independence would be a key asset.”

Instead, he turned to Dianna Ruth, Milk Makeup’s fourth co-founder. Ruth was a beauty industry veteran, who had developed products for Bliss and Sugar while at Li & Fung, and for Benefit, Hard Candy and Lipstick Queen, while at Nu World. “Her name kept coming up in meetings as one of the most talented product developers out there,” says Rassi.

“I went in to meet with Rassi and Georgie and it was one of those meetings you think is going to be 30 minutes and you end up spending four hours,” remembers Ruth. “They explained to me what they had done — that they had gone forward and pitched it without any physical product. I was shocked. I had never heard of a company doing anything like that before.” Ruth first joined the venture as a consultant, becoming chief operating officer a few months later.

“One of the first things I told the team is, ‘I’m not coming to build this line just to copy what’s already out there,’” says Ruth. “The world has enough concealers. So I didn’t want to bring anything out that wasn’t totally game-changing. That’s why, for every product, we made sure there was a unique formula, unique application and unique packaging.”

Here, the company’s lack of experience in cosmetics became an asset. “What I realise now is that many people, when they launch new lines, they usually look at everybody’s best-sellers and then they do their version of that,” says Rassi. “We didn’t look at anyone’s best-sellers. We didn’t have the industry baggage that perhaps a lot of companies in that industry would. We just looked at everything from fresh eyes.”

Milk’s other major asset was its physical studio space and staff, who proved to be useful guinea pigs. Rassi, his wife, Ruth and Greville would cook up ideas and products in their workshop — a windowless room, which had previously served as Kanye West’s studio while he was developing his shoes — and then run out and have Milk employees try them. “We really used all 80,000 square feet of Milk New York and Los Angeles as a research and development space,” says Rassi.

Several revelations came out of these free-flowing focus groups: For one thing, Milk girls and guys didn’t use tools, preferring instead to do their makeup on the fly, often just as they were running out the door. Likewise, they didn’t have the time — or the desire — to reapply their makeup midday. They cared about what went into their products, expecting companies to use paraben-free, mostly natural ingredients. They also didn’t treat their products with kid gloves; they dropped tubes of foundation on the floor and chucked concealer into purses already laden with the detritus of a busy life: spare change, receipts, gum wrappers, lint.

So, Milk Makeup had to be easy to apply; it had to be crafted from high-quality ingredients and it had to last. Most importantly, it had to stand up to a constantly-on-the-go urban lifestyle with all of its mess. It was this last imperative that lead to what was perhaps Milk Makeup's biggest innovation: Packaging infused with antimicrobial silver so that, according to Ruth, “It could be dropped on the bathroom floor and still stay safe and won’t discolour.”

When you listen good, it doesn’t matter if you’re listening to the CMO of a major company or a girl in Ohio.

When the Milk Makeup team returned to Sephora, it was with an offering that included lip markers, shadow-liner hybrids and multi-purpose skin formulas in rollerball or stick packaging that eliminated the need for brushes.

“Their products were like nothing out there,” says Sephora’s Hahn. “The concept, the look and feel of the products was all very unique.” Sephora signed on to carry the new line in 50 of its stores, allotting the brand prime real estate in its spaces. Milk Makeup immediately went into production and Rassi began thinking about the gondola design. It was important to make a big impact as, for most of the country, particularly those living outside Los Angeles and New York, it would be the first time they’d ever heard of Milk. “We wanted to use the gondola as a billboard and do something that no one’s ever done before,” says Rassi, who eventually landed on the idea of lighting up the entire structure, ensuring that it would shine among a sea of glossy black displays.

“The trust that Sephora put into us and our crazy ideas was just incredible,” continues Rassi, who credits the beauty behemoth with helping to make Milk Makeup’s success so immediate. “If it weren’t for them, I would have made 10 mistakes by now,” he says. In addition to offering up valuable retail space, Sephora has acted as a sort of unofficial mentor to the fledgling brand, advising its founders on everything from what new shades to produce to how to scale its team. “Right now as a company we have to get two things right: we have to scale, and we have to market,” says Rassi.

“The greatest competition we have is ourselves — that’s it,” he adds. “We don’t really look at what other people are doing, we just listen and we just think about the community. I would say the most difficult part was internally going from a B2B company to a B2C company.” As for how Milk managed that transition smoothly, Rassi explains: “We just did it. We had to. When you listen good, it doesn’t matter if you’re listening to the CMO of a major company or a girl in Ohio.”