Three years into his tenure at Christian Dior, Raf Simons has brought new energy and modernity to the venerable French couture brand. In an in-depth video interview on the day of Dior’s Cruise show in Cannes, The Business of Fashion goes inside Raf Simons’ Dior.

CANNES, France — Raf Simons’ eponymous label, with its links to youth culture and underground music, had made the Belgian designer a hugely influential force in menswear and a favourite amongst fashion insiders and the conceptual art crowd. Yet, for the wider public, his work remained relatively unknown.

So when he was recruited in 2012 to take the creative helm of Christian Dior, one of the biggest and most prestigious luxury houses in the industry, Simons accepted the call.

But it wasn’t easy.

“At the beginning I thought it was very scary. But it was only scary because of not being very well informed of what the actual feeling is when you're dealing with a house of that scale,” he told BoF in an in-depth interview a few hours before Dior’s Cruise 2016 show, held at the otherworldly Bubble Palace just outside Cannes, France. 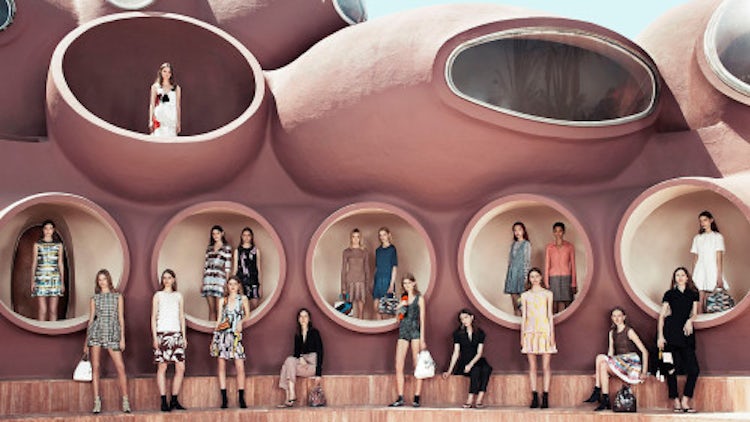 In the fiscal year ended June 30, 2014, Christian Dior Couture generated more than €1.5 billion (about $1.7 billion, at current exchange rates), making it one of the largest luxury fashion houses in the world. Indeed, Dior is a very different scale of business compared to Simons’ own menswear label, which celebrates its twentieth anniversary this year, or Jil Sander, the German minimalist brand where the designer spent seven years as creative director.

Simons says that it was precisely this change of scale that drew him to the role at Dior. “I was attracted very much to go to that kind of scale because of its big business, because of the size of the turnover, because of the reach,” he said. “I think that it started to annoy me at one point that people always kept thinking that I was only interested in the niche and conceptual and the highly intellectual and the arty. Yes, I'm interested in all that, but it almost seemed, at one point, a challenge to reach out to more people.”

Simons also felt a strong connection to Christian Dior himself, having studied the designer’s work in the later part of his tenure at Jil Sander. “I was completely attracted to the history of Christian Dior at that time,” he said. “I was looking more at different historical brands to see where to move on with women's. I was almost expecting myself to fall more in love with Balenciaga or Givenchy, because of its kind of futurist, clinical, architectural outcome. But I did not. In the end [Dior] brought me back to my own past, which was so much related to the landscape and natural environments, simple environments and purity of things that are about beauty and femininity and nature.”

Since joining Dior, Simons has injected a new energy into the brand that the designer says comes from today’s luxury customer and the realities of her lifestyle, filtered through the lens of how Monsieur Dior, himself, might have gone about designing for her.

“Women live their lives very differently these days. We are in the 21st century,” he said. “The way people look at Christian Dior, they still feel very strongly connected to the original Christian Dior. But it's almost impossible because it only existed for one decade and that was the mid-century period. So, it's inspiring sometimes for me to think, ‘What would he have done? Where would he have evolved to?’”

Rather than literally interpreting historical Dior codes like the bar jacket, as he did in his first seasons at the brand, Simons is now tapping more lateral inspiration as well as his own gut instinct, as he becomes more comfortable in his role.

“I feel like it's not good for me to be too analytical and too intellectual, because maybe it won't work for the Dior audience. It requires from the designer — me, in this case — a different way of thinking and I find that a big challenge, because I was used to a certain way of thinking throughout Raf Simons and Jil Sander,” he said. “For seven years, there was a system and there was a way of thinking that I wanted to break out of, even if it would be criticised at first. I had to be ready for that.”

Indeed, not everyone has warmed up to Simons’ new vision for Dior, a sign that his ideas, even when channelled through a more commercial brand, remain provocative. But at the end of the day, Simons seems to have embraced the idea that Dior’s sales figures speak for themselves and are the ultimate barometer of success.

“I think I used to be so obsessed with what the press was going to say. What are a handful of intellectuals going to say? I'm still like that. I'm in that world and I'm like that, but at the end of the day, it comes to a point where women just want beautiful fashion. I want to reach out and see it succeed,” he said. “Are they going to buy it? Are they going to wear it? It means a lot. I think it means probably most if they are effectively going to wear it, especially for a house on that level.”

Watch the full interview with Raf Simons in the video above.

Disclosure: Imran Amed travelled to Cannes as a guest of Dior.