NEW YORK, United States — A recent Instagram survey found that nearly 70 percent of its 1 billion users log on to interact with influencers and celebrities, whether it’s commenting on Chiara Ferragni’s latest outfit of the day or liking Kylie Jenner's new lip shade. Now, the platform wants them to buy what they’re wearing, too.

Starting May 9, about 50 influencers, designers and media titles, including Ferragni, Jenner and Aimee Song, as well as publishers like Vogue and Hypebeast, will gain access to Instagram Checkout, a feature introduced last month that makes it possible for users to buy products tagged in posts and stories without leaving the platform. They’ll join 23 brands, including Nike and Oscar de la Renta, who must pre-approve which influencers can link to their products.

Checkout marks the beginning of a new era for shopping on Instagram, which has swallowed an enormous portion of the online advertising market but until recently had largely steered clear of becoming directly involved in e-commerce.

If executed successfully — Deutsche Bank predicts Checkout could generate $10 billion in annual revenue for Facebook in 2021 — shopping on Instagram could have significant implications not only for the platform but for brands and influencers, too. Commerce is an increasingly important focus for Instagram parent Facebook, which is facing a growing challenge from Amazon for advertising dollars. The two have mirror-image business models: Amazon offers a huge selection of products for sale, attracting an audience it can now target with advertising; Facebook and Instagram grew by attracting a huge audience it now hopes will embrace e-commerce. Google is also in the mix, having introduced shopping features last year.

Instagram says Checkout, which is limited to the US and the 23 brands that signed on with the feature when it debuted last month, will continue to evolve. And the expansion of the product to influencer accounts demonstrates just how ambitious Instagram is about becoming a social commerce destination.

“There's a world on Instagram where a lot of shopping will happen from other people and not just from brands,” said Vishal Shah, Instagram’s head of product. While there is reportedly a standalone Instagram shopping app in the works, he said the company is focused currently on making purchasing easier inside the existing app.

There's a world on Instagram where a lot of shopping will happen from other people and not just from brands.

Shah was promoted to the head product role in December following a series of leadership changes at Instagram last year. Co-founders Kevin Systrom and Mike Krieger left abruptly in September, and reports indicated they were dismayed by Facebook’s plans to make Instagram a more commercial platform.

But Instagram’s shopping ambitions stretch back for years. In late 2016, Instagram first launched shopping tags that allowed users to see the price and details of items, as well as click through to complete the purchase. But the app leads users to brands’ websites, where the payment process is often clunky. Today, this function is available to eligible brands with a business account, and over 130 million people engage with them each month.

With Checkout, sales happen directly on Instagram, with the platform taking a cut of each sale. Brands take care of fulfillment and, starting next week, grant permission to influencers to add the shoppable tag feature to their own images and Stories. As of now, the influencer does not receive a percentage of the revenue from the sale.

“This is just one step, or kind of one marker, in our ongoing commitment to shopping,” said Eva Chen, Instagram’s head of fashion partnerships.

Checkout comes with some tradeoffs for brands and influencers. They’ll be inviting a powerful third party into their sales, with Instagram, rather than the seller, gaining valuable data such as customers’ credit card numbers and personal information. Users can decide if they want to share their email address with the sellers.

If brands come to rely too heavily on Instagram for sales, they could find themselves at risk of disintermediation — or disconnected from their consumers — said Michael Jaconi, the co-founder of Button, a company that embeds commerce functionalities inside a variety of types of apps.

"It’s an exciting period, but also there is no need anymore to go to [a brand's] website," said Negin Mirsalehi, an influencer who is part of the first group to use Checkout. "I’m curious to see how brands are going to make the experience different now on Instagram." 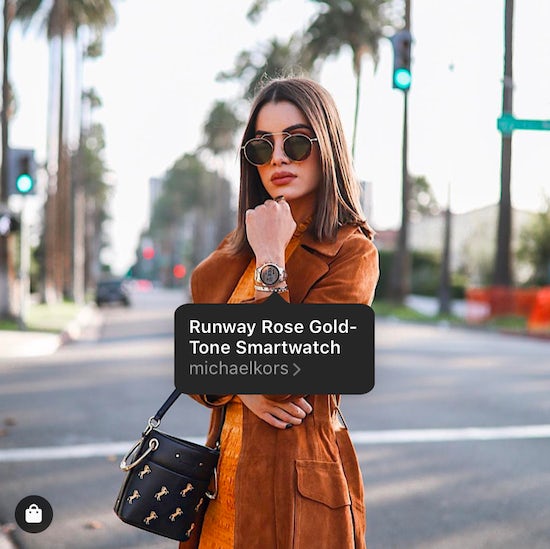 Jaconi likened it to the way some publishers depended on Facebook for traffic to such a degree that, when it changed its algorithm, they folded. Many brands have also watched Amazon sales evaporate when the marketplace introduced competing products at lower prices.

Instagram may have ambitions to become a major force in e-commerce, but for now, it plans to use Checkout to bolster its ad business. In addition to seeing how many people view an ad or like a sponsored post, Michael Kors or Zara will now know what share of that audience were inspired to buy something too.

“Ads continue to be our primary business and I think that will continue to be true for some time,” Shah said. He added that Checkout’s limitations - users can only buy one item at a time - are by design, so the company can see how it performs and how it exists within the wider Instagram ecosystem.

“Our overall product philosophy is that we don't want to just build one feature at a time and throw it out there and see what happens,” he said.

Brands that have used Instagram’s shopping features, including Checkout, say customers still largely use them for discovery, not purchasing. But that’s starting to change.

Nars Cosmetics has seen promising engagement with Checkout, particularly for exclusives made available on Instagram before they hit other channels, said Dina Fierro, vice president of global digital strategy and social engagement.

“Right now, they are trying to reduce that friction between discovery and transaction and, realistically, we are not quite there yet,” she said, adding that beauty is a “fantastic category” for Checkout because it is often an impulse buy. “In some ways, transacting via social is almost counter to what the average user is doing on social.”

Barneys customers are “responding well” to the shopping tags (the store does not have access to Checkout), according to a spokesperson. Recently, for example, a 3x1 denim skirt sold out within an hour of an Instagram post featuring fashion director Marina Larroude wearing it on the street.

Chen says Instagram is still educating brands, influencers and users about how to use the Checkout function.

Many have tried and failed to crack the code of social commerce, especially in the fashion and beauty markets. Hopes were once high for Spring, the “Instagram for shopping” app that raised $105 million from investors and sold for a fraction of that in 2018 after it failed to keep customers coming back: it didn’t have other engaging content or solve some of the frictions — the ability to buy multiple items at once — of shopping on mobile.

How consumers see the checkout process on Instagram | Source: Courtesy

But Instagram has a key advantage: the users are already there, every day, and they are motivated by more than just shopping. Plus, they are more used to making purchases on their phones now than even a few years ago.

Instagram’s success will also require the participation of influencers, today’s equivalent of shopping magazines for many users, and what Jaconi describes as the platform’s most important advantage when it comes to social commerce.

“They have every influencer totally dependent on their platform… that’s going to be really tough for Google to compete with,” he said.

Instagram shopping could be good news for influencers, too, who typically share as much information as they can with the brands that pay them to advertise their products. On Instagram, that data can include the number of times a post was liked, commented on, sent via direct message and seen by people who do not follow the influencer, among other data points. But brands are often still frustrated by the lack of quantitative data linking influencer campaigns to sales.

“I have a lot of other channels that I invest in and I have very concrete measures for what success looks like…. I need to be able to measure that in an equal way,” with influencer partnerships on Instagram, said Edlynne Laryea, Neutrogena’s global director of digital transformation and sustainability, speaking at a recent Instagram event.

Many influencers rely on affiliate revenue, or a cut of the sales they drive, through link providers like Amazon, RewardStyle or ShopStyle. Instagram hasn’t made it easy to use third-party apps to track conversions.

RewardStyle launched Liketoknow.it in March 2017 to allow influencers to track user shopping behaviour through Instagram. It reached 1 million customers in the first 9 months.

When Instagram cut down how much data third-party apps could access during Facebook’s data privacy scandals in 2018, Liketoknow.it’s core functionality was largely blocked. It still works by scanning uploaded images, and also exists as a standalone app.

Shah didn’t rule out the possibility that Checkout might someday give influencers a cut of sales. He said that the initial group of influencers testing the Checkout feature were chosen because in many cases they already have commercial relationships with brands.

“I know affiliate [revenue] is some people's very much part of their business model, but it's not as much a part of mine,” said Katie Sturino, one of the first influencers to have access to Checkout, part of her relationship with athleisure line Outdoor Voices. “I don't think that one-off relationships do as well, because people are like, ‘Oh, this is [sponsored content].’” Mirsalehi also eschews affiliate revenue partnerships, instead preferring partnerships with brands that do not include specific posting obligations.

“Otherwise, why is the talent incentivised to link out to drive sales?” she said, adding that some influencers may use it as a way to demonstrate its audience value to potential brand partners. “I see this becoming something added onto existing contracts [between brands and influencers].”

Instagram will be watching all of this and more as Checkout expands, monitoring how users, influencers and brands response and like the product.

“Brands have [return on investment] needs and this is a business — and at the end of the day, if we're not driving value, then I think it's not really tenable,” said Shah. “At the same time, I think brands understand that we're just getting started here.”