Time Inc. has announced that InStyle magazine in the UK is to relaunch as a digital first brand early next year as part of an effort to address the changing needs of its audience. 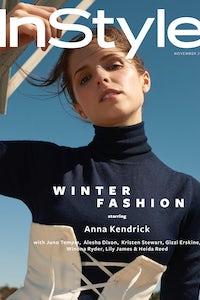 Time Inc. has announced that InStyle magazine in the UK is to relaunch as a digital first brand early next year as part of an effort to address the changing needs of its audience.

LONDON, United Kingdom — Time Inc. has announced that InStyle magazine in the UK is to relaunch as a digital first brand in early 2017 as part of an effort to address the changing needs of its audience.

The title's final print issue will be its December edition, which will be on sale from November 3.

InStyle UK editor Charlotte Moore will lead the digital team, which will work with counterparts in the US to create a 24-hour content offering, the company said in a statement, to keep readers engaged with more daily stories and videos. It aims to achieve growth of 200 percent in 2017 across all digital platforms.

“What we have achieved with InStyle over the last few years has been hugely rewarding … but the fashion world is changing dramatically, the way our audience interacts with it is changing and we have to change to meet that challenge,” said Moore in a statement.

“With a focus on delivering the InStyle experience across all digital platforms, we can really give our audience 24-hour access to all the fashion and beauty looks, trends and brands they clearly have such a huge appetite for,” she added.

The decision comes at a tough time for print magazines, which are battling against a challenging backdrop of falling advertising sales and circulation figures. With the majority of editorial content being consumed digitally, most publishers have acknowledged that the future of the content industry lies online.

Indeed, fellow publishers Hearst and Condé Nast as well as Time Inc. itself have each announced plans to significantly boost their digital offerings in the past few years, as well as experimenting with a range of ways to cut costs, including pooling staff and sharing content across multiple titles.

“The idea behind this is that when you don’t have print, you cut out your paper cost and your distribution cost. [But] the problem can be the classic case of advertising to print pounds, and digital to pennies. The ad revenues you get aren’t enough to accrue the print losses. And realistically, unless you’ve got a very strong brand, then it can be hard to make money online.”

His view was shared by Alex de Groote, media analyst at Peel Hunt, who says Time Inc's decision to stop its print edition was a surprise given that its monthly circulation numbers are still relatively strong.

"It’s still doing 100,000 copies a month ...  so the circulation is still fairly significant. But it does conforms to the wider industry pattern," he tells BoF, adding that the fall in sterling may have also contributed to Time Inc. decision to stop printing the magazine. "The cost of buying and printing has gone up a lot as a result of Brexit and realistically it's not going to come down any time soon. So publishers will be thinking about the trend in raw materials costs as well."

It has not yet been decided whether Time Inc. will announce any redundancies as a result of this move, as the company has just entered into consultation with its team, but maintaining a strong British voice and expertise remains a key focus for the InStyle UK brand, Justine Southall, Time Inc. UK’s managing director, fashion and beauty, tells BoF.

There are also no current plans to overhaul its other magazine titles like Marie Claire, Look or NME as digital first brands, she says, adding that the company was always looking for new opportunities and new ways to innovate.

“There is nothing else at this stage that meets the criteria that we would need to make this kind of change,” Southhall says. “It depends on the brand and depends on all the various combinations of facts that affect that brand … But there’s always innovation happening. Whether it’s the transitioning of brands or whether it is new brands, or new ideas.”

The company, which launched InStyle UK in 2001, said the digital version of InStyle in the US had achieved significant digital growth in the last few years, increasing 96 percent in 2015 alone, to reach 10.5 million unique users, according to Comscore, with a total social footprint of 11 million.

Time Inc. recently appointed Laura Brown, former executive editor of special projects at Harper’s Bazaar, as its editor-in-chief of InStyle US to help oversee the brand’s transformation particularly across its digital and video offerings.

As a result of its relaunch, Time Inc. will redesign the InStyle UK website to reflect the change to digital only, details of which are currently being devised by the Time Inc. and InStyle UK teams.

“This is a very big ambitious-scale play around a brand that has got a really good reputation in this space. It is sad that the print is closing,” says Southall. “But the opportunity for the future is huge and it is all about that innovation and particularly digital innovation that is what Time Inc. is really driving right now.”

Creative and Management Shake-up at Condé Nast Gathers Pace
Is the New Style.com Working?
Can Cost-Cutting Save Fashion Magazines?