Our third annual BoF 500 print edition focuses its lens on the people, brands and places rebooting to adapt to market forces, new technologies and a fragile global economy. It’s not out until September 22, but it is available for pre-order now. 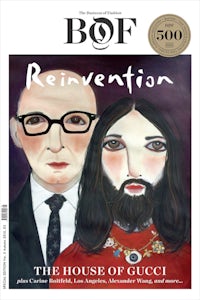 Our third annual BoF 500 print edition focuses its lens on the people, brands and places rebooting to adapt to market forces, new technologies and a fragile global economy. It’s not out until September 22, but it is available for pre-order now.

LONDON, United Kingdom — Today, we are thrilled to release the cover of our next special print edition, featuring an illustration of Gucci’s dynamic new duo, chief executive officer Marco Bizzarri and creative director Alessandro Michele, specially created for BoF by fashion's favourite Instagram artist @unskilledworker. In a matter of months, they have turned a tired Italian house into the biggest story in fashion this year and BoF was thrilled to have the exclusive first interview with Bizzarri about the transformation.

The issue will be available on September 22 to coincide with the launch of this year's BoF 500, supported by QIC Global Real Estate, recognising the people shaping the global fashion industry.

Re-invention: to make things new and fresh; to present something in a different way; to remake or redo completely. However you define it, in today’s world, it is all around us: businesses, brands, people — even countries — are rebooting to adapt to a reality that is being reshaped by an array of market forces, from new technologies and shifting consumer behaviour to unpredictable geo-politics and a fragile global economy.

Once upon a time, the booming Chinese economy was the panacea for the global luxury sector; now it is an Achilles heel. Remember when fashion feared social media? Eventually, we grudgingly adopted Twitter and Facebook and embraced Instagram. Now, fashion consumers have moved on to Snapchat, Periscope and WeChat. Not so long ago, an e-commerce site with next day delivery was the zenith of retail innovation. Today, brands and retailers are touting omni-channel commerce with services like click-and-collect as the holy grail.

In today's world, constant re-invention is necessary just for survival. We must question everything and react quickly to unexpected shifts. This may mean challenging long-held, sacred beliefs, making quick decisions with incomplete data, and taking bigger, bolder risks.

A case in point is the reinvention of Gucci, the cover story of our third annual BoF 500 issue. Once upon a time, Gucci was the hottest fashion brand in the world, commanding the attention of both the industry and the end-consumer. But when the tried-and-tested Tom Ford formula was not sufficiently refreshed under the creative direction of his successor, Frida Giannini, the brand fell into stagnation. Eventually, revenues and profits followed suit.

But while the Kering-owned house may have been slower to recognise the urgent need to re-invent itself than its rival Louis Vuitton, now re-energised under Nicolas Ghesquière, the on-going transformation of Gucci, beginning earlier this year, has been nothing short of astonishing. Have you ever seen a brand regain its position of creative leadership in such a short time span?

Behind the creative earthquake at Gucci, driven by new creative director Alessandro Michele, has been a series of important — if less visible — operational changes that have primed the brand for business success. While the speed, surprise and brazenness of the creative changes have been critical to Gucci’s reinvention, so too has been transforming the company’s bureaucratic, hierarchical culture, as well as its decision-making processes, organisation design and supply chain, all underpinned by a mindset of reinvention that now permeates all aspects of the business. I was delighted to speak to Marco Bizzarri — the brand’s new chief executive officer – about masterminding the Gucci turnaround in our cover interview.

Carine Roitfeld’s post-Vogue renaissance teaches us that not all re-invention need be rapid. Roitfeld — who, incidentally, first rose to greatness as the co-author, along with Tom Ford, of Gucci’s era-defining aesthetic in the 1990s —has undergone her own reinvention as a gradual metamorphosis. Freed from the defining role of her career as editor-in-chief of Vogue Paris, Roitfeld tells BoF that she is excited by her independence and happy to adopt a scrappier approach, outside the confines of corporate fashion media, doing things on her terms. These days, the roving editor (and grandmother) has become something of a fashion multi-tasker, trying her hand at everything from a collection with Uniqlo to a new fragrance line.

We have plenty of other reinvention stories to share too, from the growing influence of Los Angeles as a fashion epicentre and the rise of new digital influencers reshaping the intersection of fashion and entertainment in Asia to the fast-evolving race for market share in fashion e-commerce— a category that reinvented fashion retail and which is itself being reinvented by luxury incumbents and upstarts alike.

We also sat down with five former “young designers” — Alexander Wang, Christopher Kane, Erdem Moralioglu, Roksanda Ilincic and Phillip Lim, each of whom has now been in business for 10 years — to learn how they are preparing their brands for the next decade. If they are paying attention, they are thinking about how to reinvent themselves too — and not for the last time.

This was perhaps our biggest lesson from all of the stories about Reinvention. That amid unprecedented flux, a successful reboot is not a one-off act, but a series of ongoing steps.

We hope you enjoy our latest special print issue, which is available for pre-order now. And stay tuned for the launch of the full BoF 500 on September 22.

The Reinvention issue, out on September 22, will be sold exclusively at shop.businessoffashion.com and select retailers around the world.