Today we unveil the third annual #BoF500, featuring the most influential people shaping the global fashion industry in 2015. 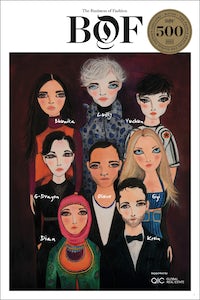 Today we unveil the third annual #BoF500, featuring the most influential people shaping the global fashion industry in 2015.

LONDON, United Kingdom — For the third year in a row, we are pleased to unveil the BoF 500, the most important list of the most influential people shaping the global fashion industry today in more than 55 countries.

Each year, the BoF team polls the existing BoF 500 community for nominations, blending the results with data analysis and months of careful research to unearth names from all corners of the globe, which are then considered for inclusion in this hand-curated collection of fashion's key players.

This year, we are pleased to introduce 103 new entrants to the BoF 500, including Alessandro Michele, the creative director whose idiosyncratic vision has re-energised the troubled Italian mega-brand Gucci in a matter of months; Amal Clooney, the human rights barrister whose sense of personal style is praised and dissected the world over; and Kevin Systrom, co-founder and chief executive of fashion's premier social media platform: Instagram.

To accompany this year’s BoF 500, we are pleased to launch another special print issue, featuring some of the most influential members of the BoF 500 seen through the lens of 'Reinvention.' The issue features some of the most interesting fashion industry power players — from Gucci CEO Marco Bizzarri to Carine Roitfeld to Alexander Wang — who are reinventing brands, markets and themselves!

To order copies of BoF's third annual #bof500 special print edition for delivery anywhere in the world, or to locate a stockist, visit shop.businessoffashion.com.