Is Third Time a Charm for Thakoon?

The designer, whose brand is now owned by direct-to-consumer cashmere label Naadam, is hoping he can crack the code on affordable designer basics.

Is Third Time a Charm for Thakoon?

The designer, whose brand is now owned by direct-to-consumer cashmere label Naadam, is hoping he can crack the code on affordable designer basics.

Thakoon relaunched his label at a lower price point, with a focus on wardrobe staples | Source: Courtesy
Share
Comment
By Chantal Fernandez September 18, 2019 05:30

NEW YORK, United States — Thakoon Panichgul became a darling of the fashion industry after he started his collection on the New York runways in 2004. But the rise of fast fashion and online shopping combined with the fall of department stores put the squeeze on independent designer fashion labels of his generation. So he relaunched his namesake label in 2016 with backing from billionaire tycoon Silas Chou. But the see-now-buy-now, direct-to-consumer model didn't work, and Chou halted it a year after its launch.

Now, after a two-year sabbatical, Thakoon is back in business with a lower price point, a clearer focus and a new owner with digital experience: Naadam, the direct-to-consumer cashmere label co-founded by Chief Executive Matt Scanlan in 2015, which raised $16 million in a 2018 Series A and counts Chou and his daughter Vivian as backers. Scanlan is now Thakoon's chief executive and operating Thakoon in its newest incarnation.

“We had one foot in the runway model,” said Thakoon about the brand’s strategy in 2016. He wasn’t bound to necessarily relaunch the brand, but ultimately decided he wanted to give fashion another try. “I didn’t want to go out career-wise on that note.”

With prices ranging from $75 to $250, Thakoon’s new approach is meant to offer affordable basics for the fashion-conscious direct-to-consumer customer, at a slightly higher price point than Everlane and Uniqlo. It will again be sold online and in directly owned retail stores. He’s chosen a market that has become quite competitive by now, but Thakoon sees an opening. “I do see a lot of basic brands out there doing phenomenally well, but what I don’t see is a designer perspective coming out of them,” said the designer. 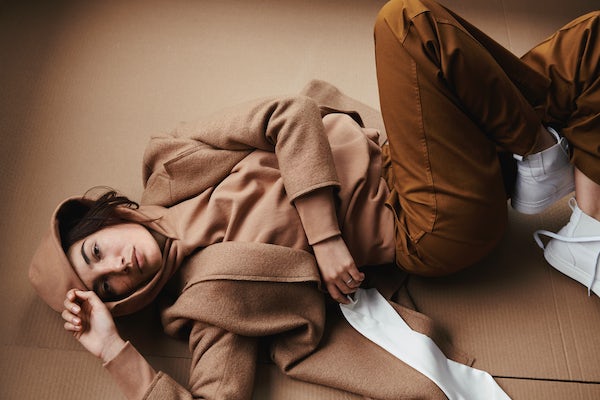 Initial pieces include a wool camel coat that ties with a sash ($225) and an almost sheer turtleneck top ($95).

Scanlan thinks the brand will resonate with millennial shoppers who have different needs and more disposable income than they did five or 10 years ago.

“It’s really important that we put stakes in the ground around that staple wardrobe,” he said about Thakoon, explaining that brands need an easy-to-describe identity to become part of a shopper’s life for the long term. More trend-driven pieces will come later as the brand learns more about what its customers want.

“We’ve seen the evolution of one of the largest, most consistent consumer demographics in American history … this kind of millennial consumer,” he said. “They’ve also evolved their financial circumstances from right out of college to people who have a career and an elevated sensibility.”

During his break from fashion, Thakoon also woke up to the new realities of the way people shop. Runway fashion is “a form of entertainment” for most people, not something they actually consider buying. “There is room for designers who used to play up in the fashion game and the runway game to be putting creativity in something that’s a bit more every day," said the designer.

Scanlan said that when Chou approached him about Thakoon a year ago, he was not familiar with the brand. He has since signed on to run another Chou-backed business, the upcoming line from Something Navy's Arielle Charnas.

In June, Thakoon launched Hommegirls, a magazine for women who shop from men’s departments.

Disclosure: Silas Chou's Novel TMT is part of a group of investors that holds a minority stake in The Business of Fashion. All investors have signed documentation guaranteeing BoF’s complete editorial independence.

The Second Coming of Thakoon