AMSTERDAM, The Netherlands — For the past couple of seasons, niche bag brands have been on the rise. Among the new wave of emerging “Instagram-famous” handbag labels, which differentiate themselves through their competitive-pricing, luxury quality and unique construction, is Wandler: an Amsterdam-based leather goods label known for its elegant, architectural shapes and bold colourways.

Currently in its second season, Wandler has already attracted an impressive roster of global stockists. After launching in 2017, the brand was picked up by 15 influential stockists including Net-a-Porter, MatchesFashion and Browns.

“I think the brand has created a maturity around itself which has a certain luxury appeal attached to it that you don’t see with many contemporary bag brands,” says Elza Wandler, the label’s eponymous founder. “Personally, I’m not attracted to super clean, but equally I don’t gravitate towards a total Versace look. However, the mix of these two is what excites me and I don’t feel like you see that a lot in fashion today.” 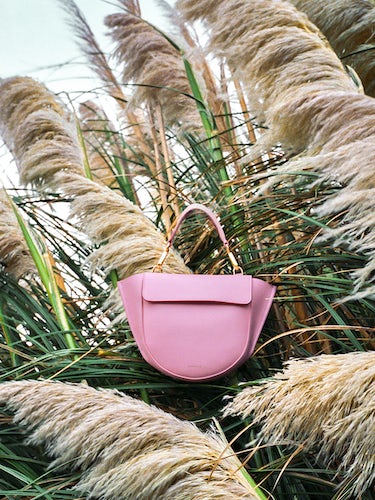 Born in the south of the Netherlands, the designer enrolled into the fashion and branding course at Amsterdam Fashion Institute in 2009, which gave Wandler a solid foundation in finding the right balance between creative design and commerce. “There I learned that the business doesn’t stop after you make a product. There is a lot that comes with it like branding, image-making and social media,” she says.

Upon completing the BA in 2012, Wandler took up a job as designer for Levi’s premium Made and Crafted women’s line. “I learned how the merchandising, design and sales teams worked closely together,” says Wandler, whose interest in accessories was further cultivated during work trips to factories in Portugal, Italy and Turkey, as well as trade shows like Premièr Vision in Paris. “It was great for researching materials and manufacturers, so when I started Wandler I was fully prepared to start the brand.”

For the label’s launch, Wandler teamed up with Italian photographer Leonardo Scotti and acclaimed Italian stylist Georgia Tal for the brand’s debut online campaign. The art-inspired “Instagram-friendly” imagery soon gained the attention of influential retailers as well as popular influencers like Camille Charrière and Linda Tol, who quickly bought into this season’s newest “it-brand”. “I’m focused on creating design that compliments a woman’s look by combining functional relevance with elegance,” says Wandler, whose versatile designs can be worn multiple ways.

The label’s early success is partly due to Wandler’s balance between uber-feminine and clean-androgynous shapes, as well as its unique use of colours, which are created from scratch by her Italian manufacturer. “It’s kind of my unique selling point at the moment. I like an ‘intelligent’ colour, so not a flat blue or purple, but a hint of blue or purple that is mixed into a grey for example,” says the designer, whose first collection was inspired by the colours palette used in the work of German artist Imi Knoebel.

“By trying to balance bold expressive colours versus soft hues, each bag has its own sense of contemporary femininity inspired by their energy and personality,” explains Wandler, whose best-selling models include the trapeze-shaped “Hortensia” bag ($890), the open-top “Lotta” tote ($820) and the “Anna” bum bag ($465), all of which come in eye-catching colourways like apple green and dusty blue — with contrasting linings — and are handmade in Italy.

Looking forward, Wandler plans to slowly grow her team, which currently includes two external sales people and an external PR agency. Meanwhile, solidifying her presence at current stockists while sustainably scaling her wholesale accounts globally will be a key priority. “For the first season, we had 17 stockists and that number will significantly increase for the next season,” says Wandler, adding that growth will come from a wide range of consumers. “I don’t really believe in one specific woman, Wandler is for everybody who feels drawn to it.”