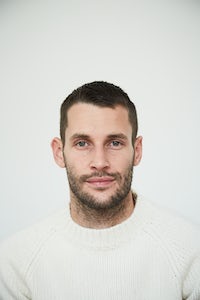 PARIS, France — Simon Porte Jacquemus and his label Jacquemus can be controversial topics in Paris. Some accuse the designer of knowing little about craftsmanship, yet refusing to hire seamstresses. Others say his clothes look like weaker versions of Comme des Garçons and Martin Margiela. Porte Jacquemus is not oblivious to all of this, and admits that when he first started his line, he did everything he could to attract attention, going to Vogue’s Fashion’s Night Out, talking to French television, even stopping people in the street. “I think a lot of people still think [Jacquemus] is a joke,” he says. “That it’s not serious, because I’m not so serious.”

But seven years after launching his label, Porte Jacquemus has built a business that’s anything but unserious — and significantly larger than most people think. According to figures released to BoF by the company, sales of the brand’s Autumn/Winter 2016 collection are twice what they were for the previous season and combined revenue for Autumn/Winter 2016 and Spring/Summer 2017 is projected to exceed €5 million (about $5.6 million).

Originally from Mallemort in the south of France, the self-taught designer got his start in fashion working as a sales clerk at the Comme des Garçons store in Paris. He launched Jacquemus in 2009 and, by 2012, became one of the youngest designers to ever show on the official Paris Fashion Week schedule. In the beginning, he showed his clothes in a relatively straightforward manner, using friends like DJ Clara 3000 in lieu of professional models.

But his shows soon evolved into something completely different, featuring surreal scenes: a child pushing a giant ball of yarn over the catwalk or putting paper cutouts over the faces of the models. Claiming to sell poetry, the Jacquemus brand comes across as, well, pretentious to some observers. But luckily for Porte Jacquemus, plenty of others have found his work appealing enough to become his customers.

To date, the brand has attracted over 100 stockists worldwide, from niche boutiques like The Broken Arm in the Marais neighbourhood of Paris, to global e-commerce pure players like Net-a-Porter, to major department stores like Selfridges and Nordstrom. For a young brand known for its arty, off-kilter pieces, accounts like these are important signs of momentum. Porte Jacquemus proudly points out that he is a self-made man, without formal training, long-standing contacts in the business or external investment.

He started Jacquemus as a reaction to his mother’s passing when he was 18 years old (Jacquemus was her maiden name). But he says he always planned to build a commercially successful brand, realising from the get-go that his first collection would have to pay for his second. “When I started, the main idea was to propose strong ideas and fashion that was accessible and affordable, in order to make those clothes sell in shops,” recalls the designer.

I think that as a brand [we are] growing up. The price also, but not so much.

Jacquemus became known for a kind of slouchy, sporty Parisian minimalism. The minimalism was part aesthetics, and part cost-savings. Porte Jacquemus says he is obsessed with the price of his clothes and the first time a piece of his cost over €1000, he asked the team to take another look at the fabrics and remeasure. Even today, most of his dresses are around €400, while coats and tailored jackets go for €700 to €900. He attributes this thriftiness to his upbringing and a family that “knows what one euro is worth.” But it’s also smart business strategy.

“My strategy, to be clear, is to have a strong brand with a strong image, and a contemporary price point,” Porte Jacquemus explains. “But I don’t want to be next to the contemporary brands.”

That’s because, in his own words, he has something to say. 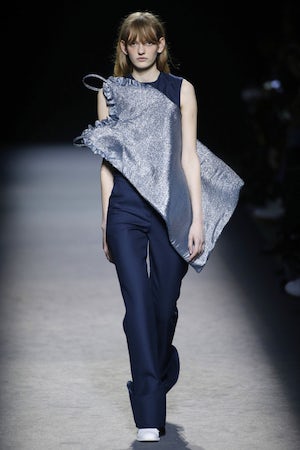 Over time, the brand has turned more towards avant-garde designs and playful deconstruction (the designer prefers the word “naivety”). The Autumn/Winter 2015 collection featured trousers with an implausibly wide waist, while one look in the Autumn/Winter 2016 collection looked as if a dress had blown in from the street and got stuck on the model as she walked onto the catwalk.

With such ideas, some assume that what Jacquemus is really selling is image, which, in turn, drives sales of accessories or easy-to-wear, commercial pieces. But the facts tell a different story.

For one, ready-to-wear drives 90 percent of sales at Jacquemus, while shoes and accessories amount to 10 percent. What’s more, Porte Jacquemus says it’s often more challenging pieces like his deconstructed coats that sell the best, although the mainstay of the business is shirting.

“My experience is that Jacquemus sells extremely well. It sells better than some more established brands, which in my view, shows that they really understand their customers,” says Laura Larbalestier, womenswear buying director at Browns in London. “Separates have performed particularly well for us. Tops are proving to be the best-sellers as they are statement pieces, but still easy to wear.”

In 2015, Jacquemus was a runner-up at the LVMH Prize, earning the business a cash injection of €150,000 (about $168,800) and boosting the brand’s global recognition to the point that a store in South Korea even created a fake Jacquemus window display. The designer says that before this, Jacquemus was “really niche.” But the exposure earned through the Prize, combined with a functional commercial strategy, gave the brand a significant boost.

“Two years ago, we didn’t have a studio for developing the clothes, we were in any studio, in the garden of the Louvre… Now we have a building and we can have more and more people who know about clothing,” he says. Indeed, the label’s growing success is reflected in the company’s recent move to a new studio on the Canal Saint-Martin in the 10th arrondissement. The premises are large and bright. Fifteen employees work over three floors, though the number jumps to 20 to 25 if you count seasonal freelancers. It is here that Porte Jacquemus is plotting his next steps.

“I think that as a brand [we are] growing up. The price also, but not so much. We still have a really good price in the market for where we are,” he says. At 26, Porte Jacquemus is a child of the digital age. He started selling his clothes online before they were sold in stores. But the designer is still contemplating a brick-and-mortar presence. “If I wanted a shop in Marais with parquet and rails, I could do that tomorrow,” he says. “But I will do it as I always dreamed to. Of course, I want the brand to have its own shop, but the answer is really to be happy,” he adds. “And also staying free. The answer is not to be an enormous brand in 10 years. It doesn’t mean anything for my life.”