TOKYO, Japan — Japan Fashion Week (JFW) is nearing its end, but has anyone really noticed that it started?

While the entire cities of Paris, Milan, and New York seem to get completely swept up in the glamour of their respective fashion weeks, the average Tokyo citizen is most likely unaware that Japan Fashion Week is currently happening. This is very odd, considering that Tokyo is obsessed with designer fashion to an extent seen nowhere else on Earth.

Why the lack of excitement?

The problem is that JFW occupies a very strange place within the nation's multi-layered fashion ecology. For around thirty years, younger domestic brands showed in "Tokyo Collection" - a loose set of collection shows held over several months each season. But in 2005, government bureaucrats decided to organise an official "fashion week" so that foreign buyers and press could come and easily see most of the brands in just five or six days. The government now subsidises many of the shows with the idea of bolstering Japan's textile exports.

This government intervention, unfortunately, has had mixed results. Sure, the government subsidies allow many young brands to realize their vision. But in general, the week suffers from a lack of name brands. Comme des Garçons, Yohji Yamamoto, Junya Watanabe, and Under Cover all show in Paris, the de facto capital for global fashion.

Most of the up-and-coming popular young upstarts with increasing international prestige - menswear powerhouses John Lawrence Sullivan and N. Hoolywood, for example - apparently do not want to have anything to do with JFW and schedule outside of the official proceedings. The end result is a relatively obscure brand line-up - one that says almost nothing about the actual state of Japanese fashion.

The lack of excitement is palpable at the JFW shows, where the front rows are populated by bespectacled retirees and corporate suits, with the occasional foreign journalist thrown into the mix. The most debonair and outrageous spectators are the fashion school kids who stand in the very back. Most of the top fashion editors do not even attend, as the brands will probably never be included in their spreads. Only the trade press covers every show. Celebrities are rare, and when they do show up, usually go incognito and stand in the back right when the doors close. Overall, there is very little of the glamour that creates a spectacle for JFW's counterparts abroad.

This is not meant to knock the participating brands, who are usually highly competent and creative. Most share a slightly avant-garde, yet earthy vibe: making clothes for rich arty matriarchs rather than "fashion people" or aristocrats. 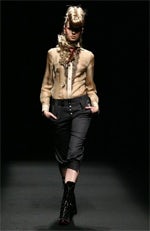 This year's collections have been extremely dark, bordering on the post-apocalyptic. Motonari Ono looked to the final days 18th century decadence for frilly satin tops. GVGV delivered a less chromatic version of its aggressive rock chic. Matohu set aside its signature Asian robes in pastoral pastels for dark black and blue elegance with a nod to the ancient use of animal pelts in clothing. Aguri Sagimori went '90s grunge with frightening black net dresses, leather-and-fur, and the prerequisite plaid and combat boots. Somarta's masterful military-themed collection offered exquisite dresses and long coats in purple paisleys, like the high-society wardrobes of an invading alien civilization. Everlasting sprout had models in low gauge granny knits walking on a stage that looked to be the ruins of a Kansas antique shop from The Day After.

When not dwelling upon the imminent destruction of civilisation, designers also seemed to be much more accessible than normal, perhaps in response to a shrinking apparel market. Normally avant-garde and highly conceptual Hisui pushed a collection of sexy animal-themed pieces — like a giant rounded ostrich-esque feather skirt. In the past designer Chinami Kamishima has created Joan of Arc plate-armor breast-plates and other dramatic looks, but this time around, she chose wearable minimal black dresses and retail-friendly plaid trench coats.

The fundamental issue of Japan Fashion Week, however, remains the fact that attendance and attention to the shows gives you very little perspective on the direction of the Japanese market or Japanese "design." We've known about the top Japanese masters since Paris.

Meanwhile, the Tokyo streets are still bubbling with unbridled fashion energy - a youth market completely ignored by JFW, other than some small overtures by talented pop designer Han Ahn Soon, the cartoon-y Ne-Net, and the quiet, organic fur fur. Tokyo Girls Collection and Shibuya Girls Collection (to be discussed in an upcoming BoF piece) attract 40,000 girls for "runway" shows of their favorite mass market brands, so the problem is not that Japan has ceased to be mesmerized by apparel.

If JFW could somehow secure a brand line-up that actually told the story of Japanese fashion — the complete totem pole from designer masters to up-and-coming talents to street favorites — they could probably create an event that forced the world to pay attention.

As it stands now, JFW is a side-show to Japanese Fashion rather than its prime time.