BASEL, Switzerland — Sitting on the top floor of Hublot’s shiny black Baselworld stand, Jean-Claude Biver, the man at the head of LVMH’s watch division, is venting. I’ve asked him why the Swiss watch industry is flagging, and he’s not very happy about it.

While he’s currently charged with running TAG Heuer (of which he is chief executive), Hublot and the lesser-known Zenith, outside watch circles, the name of Jean-Claude Biver carries little weight. But inside those circles, the JCB initials alone induce reverence.

In the 1980s, Biver bought and revived Blancpain, a name that had been redundant since the early 1960s. In the mid-1990s, he orchestrated Omega’s partnership with James Bond. And in the Noughties, he turned Hublot from a peculiar Swiss watchmaking concern into a global brand that now counts footballer demigod Pelé, the Ferrari F1 team and Usain Bolt among its partners and is the official timekeeper of the FIFA World Cup. In 2005, launched the Hublot Big Bang, a brazen, larger-than-life watch that is as good a metaphor for his impact on Swiss watchmaking as any.

Unhappy though Biver is with the charge that the watch industry is in a funk, the fact remains it is. Exports were down 8 per cent in January according to the Federation of the Swiss Watch Industry, following a 6.8 per cent slump in the second half of 2015. Much of the explanation for this lies in the Chinese market. The country’s well documented economic slow-down saw exports to China fall by 4.7 per cent last year, but more dramatic was the story in Hong Kong, where many Chinese travel to buy their watches. Exports to the world’s largest market for Swiss watches dropped by 22.9 per cent, equivalent to SFr 1bn by value. That’s a big hole in the industry total of SFr 21.5bn.

At times like these, the industry looks to Biver for answers. What is he doing to reverse the trend? Last year he slashed the prices of TAG Heuer watches, repositioning the brand for a younger audience after a decade spent pursuing the super-rich with low-volume, six-figure complications. At the same time, he signed Cara Delevingne, Cristiano Ronaldo and most recently Formula 1 upstarts Red Bull Racing. 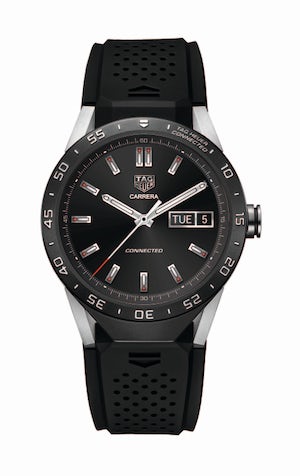 Then in November last year, TAG Heuer released its TAG Heuer Connected, Switzerland’s most aggressive answer to the Apple Watch. Biver even held the press conference in a New York tower, within eyeshot of Apple’s iconic glass-box store. He claims it’s flying off the shelves.

“We expected to sell 20,000 pieces, but we have demand for 80,000 pieces for 2016,” he says. That would make it far and away the smartwatch leader among the Swiss brands, a crown so far belonging to Frédérique Constant, an independent that claims to have sold 16,000 of its Horological Smartwatch last year.

To his credit, Biver knows that this isn’t entirely his own doing. “Probably it’s because of Apple,” he concedes. “When the journalists said the only alternative to an Apple Watch is TAG Heuer, that gives us a transfer of image and we have taken it.”

Biver has always been a fearless disruptor. When he bought the Blancpain name in 1982, the mechanical watch industry was in tatters, ripped apart by the perfect storm of oil and gold crises, and the genesis of cheap quartz watches brought into the market from the Far East. It was no time to be breathing new life into a company making outmoded, expensive watches.

And yet it was. Biver, like Swatch Group founder Nicholas Hayek Sr., was one of a handful who twigged early that Swatch was reclothing wrists all over the world with its cheap but fashionable analogue watches, and that those same consumers would want more exclusive watches made the old-fashioned way as they got older.

By 1992, Blancpain was turning over SFr 50 million. Biver sold it to Swatch Group (owner of Omega, Longines and its most recent big name acquisition Harry Winston), becoming a member of the group’s management committee at the same time. He stayed there until 2004 (hooking Omega up with Bond, Crawford and Michael Schumacher), at which point he became chief executive of the little fancied Hublot. LVMH boss Bernard Arnault apparently asked him to take over the running of all the group’s watch brands in the summer of 2013. After some initial hesitation, Biver was announced as President LVMH Watch Division in March 2014, aged 63.

The strategies Biver has put in place since appear to be working. “There is an opportunity for Swiss brands to adopt new technologies and come to the market with new products, taking market share from slower competitors,” says Luca Solca, luxury goods analyst at Exane BNP Paribas. “And that is what TAG is doing.”

Biver’s thoughts on smartwatches make for interesting reading. “In three years I believe the success [of the TAG Heuer Connected] will be much bigger than today because the wearable has legs,” he says. “Wearable will be everywhere. You will be surrounded by information tools that all communicate with one another.”

TAG’s smartwatch has been developed in partnership with Google and Intel — it’s scarcely a watch, something Biver is eager to impress. “What do we have inside our watch if we take everything away? We have a computer. We have the smallest Intel computer in the world. We are invading the wrist, not for a watch, but to communicate to you,” he says firmly.

Such a statement begs the question: can a man proselytising smartwatches developed in America and made in the Far East lead the charge for the traditional Swiss watch industry? Surely if this is the future, the mechanical watch is doomed?

“No!” he booms, his face reddening. “If you have never worn a watch, the effort to wear a watch is much bigger than if you have been wearing an information tool on the wrist since you were 15 years old. The Connected watch is the best promotional tool for the mechanical watch.”

Biver is so convinced that TAG Heuer Connected's customers will come to want a mechanical watch that after two years they can trade their obsolete smartwatch for its mechanical twin. At launch, Biver announced that for an additional £1,100, customers could buy “eternity.”

He is also working on perceptions of TAG Heuer. “TAG Heuer must be the entry price in luxury,” he says. “It must enable every young man and every young woman to enter through the door of luxury. That means it must be affordable luxury. And I need a perceived value that must be double what I see.”

By combining these strategies, Biver believes TAG Heuer will rise above the chaos around it. “You will not go to a restaurant where you see one old couple sitting talking to each other,” he says feverishly. “Many people waiting outside, that’s where you want to go. And people see many people waiting outside TAG Heuer. And they think: ‘The brand must be successful!’ You want to be linked to success; you don’t want to be linked to a sleeping brand.”

TAG Heuer is awake, as is Hublot. Zenith, by comparison is, in Biver’s words, “suffering.” The traditional brand was guilty of placing too many eggs in one basket during the years of plenty at the beginning of this decade. “From 2011 to 2013, Zenith was so strong; but it did 67 per cent of its turnover in Asia. They have lost probably 30 per cent [of their Chinese customers] due to the Chinese slow-down. This is why Zenith is doing minus 8 per cent, like the Swiss watch industry.”

Biver has recently begun focusing his attentions on the old brand. Few would bet against him turning it around. “You can safely count Jean-Claude among the giants in the industry,” says Solca. “His vision and competence in watches can be compared to that of the best entrepreneurs we have seen in this business in the past 30 years.”