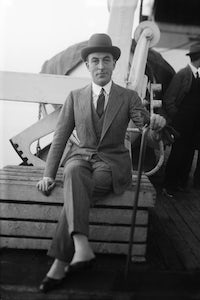 PARIS, France — Were he alive today Jean Patou would not just be a great couturier, he would probably be a television personality as well. Smooth, urbane, always immaculately turned out, Patou was a peacock – and one with exceptional taste. But taste alone was not sufficient to make him, alongside Coco Chanel, one of the most influential couturiers in Paris in the 1920s. He had to understand what it was to be a modern woman too.

The new women to which he catered were different to their mothers. They were aware that the social world was changing, albeit slowly, and in attitudes rather than actualities. While their mothers continued to patronise the grand old Paris houses, their daughters were looking for something different, something individual.

The dramatic changes in the arts — the influence of the Ballets Russes, the artworks of Derain and Dali — and the exciting developments in philosophy from Cocteau and Gide had each come to their attention. Their way of life had also changed: inside nightclubs they could dance shockingly modern dances such as The Black Bottom or the Charleston with hedonistic abandon, at a time when Josephine Baker — a black entertainer whose fame and race scandalised old-society — and the Dolly Sisters were the hottest things in town.

Into this world Patou and Chanel fitted perfectly. They realised that 'Le Sport' was the biggest cultural advance of all and if clothes were to be part of it they had to be modernised — and simplified. Both were shrewd enough to know that they had to annexe this new market without losing old customers. And they both wanted to be the first to do so.

Chanel and Patou were famed for the animosity they felt for each other. They were deep rivals for the patronage of the new post-World War I customer: an individual who had barely existed in the early years of pre-war Paris. Their jealousy was an obsession and a cause for endless gossip in gatherings where the likes of Cecil Beaton disported themselves, tearing reputations to shreds over a cocktail, as Cole Porter once put it.

Each had eyes firmly focused on the American market and, in particular wealthy ex-patriots such as the Scott-Fitzgeralds and the Hemingways, the carefree young Americans drawn to Paris and the South of France for their 'strangers in a foreign land' freedoms. Namely the availability of cocaine and drink denied to them in the US by strict prohibition laws.

Born in Paris in 1880, Jean Patou entered the world of fashion from a comfortably well-off bourgeois family, respectably engaged in trade, making among other things, high-level quality chamois leather for the fashion world. Although as pure purveyors, the family had little direct contacts with designers, as in those days few tradesmen did.

Even before the war, Patou had made his first move into the fashion world with his own small dress establishment called Parry. It was so successful that a New York retailer bought everything in the showroom: an entire collection. As a result, Patou found the courage to take on the big names of Paris.

He was 27 when he was drafted into the army following the breakout of World War I. He spent his time at war in the artillery and eventually joined the Army of the Orient in Thessaloniki as a captain in the Zouaves where he became so attracted to the traditional Greek peasant dress, with its complex beading and embroidery that he brought some home at the end of the war.

He lost no time catching up on lost time. Patou presented his first collection under his own name in 1919. It was an immediate success and he very quickly had enough private clients to put him in the same league as Chanel and Molyneux, who were joint leaders in the popularity stakes at that time. But American buyers — the big companies that paid a considerable 'caution' to the couture houses, which was only redeemable against their purchases — were tempered in their enthusiasm. They recognised that Patou's clothes were speaking a new, modern language but they looked so French. How would they be understood by American women?

Patou understood. Before Chanel or any other couturier in Paris, he had a moment of inspiration that was to make him famous and exceedingly rich. Moreover, it changed the face, shape and tone of international fashion. Patou decided that to conquer the loyalty of American women he needed to show his clothes on women with whom they could identify. The traditional runway models in Paris had, he realised, an old-fashioned, and certainly pre-war, homeliness which most fashionable clothes emphasised by highlighting their bosoms and hips. American models were taller and skinnier. Some appeared to have no hips at all; others with their cropped hair, looked like young boys. But the most glaring difference to Patou's eyes was their slim ankles and athletic legs. They even walked differently to European models. With a great deal of publicity, Patou set off on the cruise liner Normandie to find his models at source, in New York. His progress watched cautiously by other couturiers, especially Chanel.

Patou knew that for him to make real money he needed two types of sale. One was the traditional individual sale to private customers who were mainly, but not all, European and, of those, predominantly French. But he needed the American market to show interest too — and with it the American magazines like Vogue and Harper's Bazaar, because he knew the publicity they brought was a designer’s lifeblood.

With the help of Vogue's editor-in-chief, Edna Woolman Chase, he advertised for a casting in New York. The advert stated: "Must be smart, slender, with well-shaped feet and ankles and a refined manner.” Over 500 hopefuls arrived at the Ritz ballroom for the audition. The jury was actress and decorator Elsie de Wolfe, who was the nominal author of the 1913 book ‘The House in Good Taste’; the photographer Edward Steichen; Woolman Chase; her proprietor Conde Nast and Patou.

Patou had come to America thinking he required only three models but, when he saw the quality of the girls, he decided to double the number and it was six models photographed on the decks of the Savoie liner before it set off to bring them to Paris.

The French capital was intrigued by this development but not convinced of its worth — all apart from Chanel, that is. She was furious. Not only because Patou had upstaged her in the vital US market but, mainly, because she had to admit (to herself, at least) that he had judged the modern mood of fashion perfectly.

The French press accused him of disloyalty to his country for using American models and, to disarm their criticism, he came up with a slogan: 'The French woman is Venus; the American Diana'. It cut little ice, but in truth, Patou had become too powerful to be wounded by the press.

In 1925 he opened a branch in Biarritz to sell his more sporty lines but it was a show in January 1930 that earned him the title of the Great Innovator. When every other couturier was still designing short skirts, he sent out a collection with longer skirts. It had an impact akin to that of Dior's New Look over 20 years later. For a second occasion, even Chanel had to follow. Her partisan supporters have since said that she dropped the hem first but Woolman Chase maintained that although Chanel's reaction was quick, “she hit the deck seconds behind the Great Innovator.”

Patou and Chanel spent the rest of their time (before Patou's early death) being very publicly, furiously jealous of each other. They compared the space given to their clothes in Vogue. Woolman Chase was accused of favouritism; threats of a boycott of her  magazine was hinted at. And, as it turned out, the more aggressive party was Patou.

Jean Patou the man was an archetypal boulevardier, and a playboy. He was barely seen in any informal dress except when sailing in Biarritz and once said in an interview that, 'to be truly soigné, a man should have at least 80 suits.' He was a book collector and, in a throwback to his father's roots, had a perfectly leather-bound library. His parties rivalled those of Paul Poiret for conspicuous consumption. Janet Flanner, a highly respected American journalist in Paris, who filed stories for the New Yorker, described one of Jean Patou's parties in 1930. His garden, which had been roofed over, had every surface covered in silver foil, including the trees. Three small lion cubs were in attendance for the 'Ah' factor. Certainly, Flanner was more amused than impressed.

He loved powerboats, fast cars, the very top restaurants in New York, Paris and Biarritz, and enjoyed displaying the latest beauty or heiress on his arm. As he told an interviewer (with or without his tongue in his cheek is unknown): 'You see, I have a good deal of confidence!' Most of his friends were male and some years older, prompting modern commentators to speculate on his true sexuality but that is all it remains.

Patou died suddenly of an embolism on 8 March 1936. He was aged 55 and after his death it was revealed that his firm, once so successful, had been in liquidation since July of the previous year, with a deficit of over 12 million francs. It was almost certainly his premature death that saved him from a humiliating end like that of Poiret, whose last years were spent in abject poverty, alone, forgotten and unsung.

It has been suggested that one of the reasons Chanel despised Patou was that, to her, he was a fraud. She was a technician who knew everything about making a garment. He knew nothing about the practicalities, was not hands-on and directed rather than created garments, in the way that many top designers work today.

In fact, Patou's actual clothes seen at this distance are no better or worse made than those of his contemporaries but, unlike them, he has other claims, such as using jersey before anyone, including Chanel, and developing sportswear as a legitimate part of a chic woman's wardrobe. As early as 1921, he sent the famous tennis player Suzanne Lenglen onto the centre court at Wimbledon in a short pleated skirt — a sensation, especially when worn with his simple knitted pullovers and cardigans, with his monogram prominently placed.

But out of many achievements he will largely be remembered for his new approach to models, taking the American market seriously, the employment of an American publicist and having the chutzpah to choose Elsa Maxwell, one of the greatest party-givers and reputation-makers in the between-war period in Paris to look after his public relations. It was Maxwell who came up with the slogan ‘the costliest perfume in the world’ for Joy. Created in 1930 and containing over 10,000 jasmine flowers per ounce it is still available today.

Many designers have worked at the house since World War Two, including Marc Bohan, Michel Goma, Angela Tarlazzi, Jean-Paul Gaultier and Karl Lagerfeld. But after Christian Lacroix left in 1987 to pursue his own brand the couture arm closed.