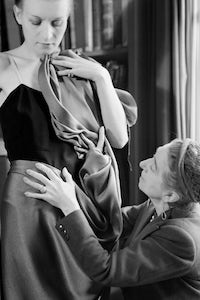 PARIS, France — The house of Lanvin, named after its founder, Jeanne Lanvin, is the oldest surviving fashion house in continuous existence. Jeanne Lanvin was born in 1867, the eldest of 10 children. Her father was a journalist. Although clever and quick witted, the end of the 19th century was not a good period for even a middle-class girl to forge a career for herself. So, aged 13 Jeanne became a dressmaker's errand girl. Her teens were spent as an apprentice milliner, from which she moved up to be a dressmaker's assistant before she felt ready to work for herself.

Aged only eighteen, she opened a small millinery workshop in rue du Marche Saint Honore in 1885, funded by her own small savings It was a realistically modest start for a creator who, in the 1920s, was one of the most commercially successful couturier working in Paris. Unlike Vionnet, another successful designer in ‘20s, Paris, Jeanne Lanvin could never be considered cutting edge. She was about clothes that were pretty rather than fashionable but she was successful because they gave women confidence. No Lanvin gown ever overwhelmed the women wearing it and, in that brittle ‘20s world, when chic was all, that was quite an achievement. Whereas Chanel pared down, Lanvin added decoration because she knew that it appealed to women who wished to look smart but not like a fashion plate.

For this reason, Jeanne Lanvin never had a 'look' that characterised her thinking for any one season. Every collection offered a wide variety of options for clients, carefully calibrated to cover a wide age range and a spectrum of figure types. Everything she offered her customers was meant to enhance their femininity, not just in their own eyes but also those of the husbands and lovers who paid the bills.

Briefly married to an Italian nobleman, Henri Emilio Georges Di Pietro in 1895, Lanvin had a daughter two years later, christened Marguerite Marie-Blanche, who was destined to make her mother's position in Paris not only unique but financially buoyant, even though the marriage broke down when the child was only six. A journalist like her father, her second husband Xaviar Melet was eventually to become French consul to Manchester, England, although Lanvin herself as far as is known, had little to do with the city.

Jeanne Lanvin was besotted with her daughter and, even when she was a child, she began to design identical mother and daughter looks. Entirely new in the history of couture, they caught on immediately and remained a staple of the house DNA. So successfully had Lanvin created and captured a new market that it was a field she had to herself. It was a signature, but not her only one.

Lanvin was not just a creator. She was also a very shrewd businesswoman who knew how to place herself in the burgeoning couture market in the early 1920s. Interested in Medieval and Renaissance art, along with Egypt and antiquity, she created a soft but vibrant blue, guaranteed to flatter most skin and hair types. Called Fra Angelico blue, it became almost a trademark.

By 1927, when she launched Arpège, one of the world’s most successful fragrances even today, she commissioned one of France's top architects to design the black glass ball which was its bottle. His name was Armand Albert Rateau and he had already designed her Paris home, her shops and her villa in the country. Rateau became part of the business. He managed Lanvin Sport for her and, together, they created artefacts for the home, now Art Deco collector's items.

Despite all this expansion, Lanvin fully realised the enduring power of the mother and daughter theme, which is why, to this day, the bottle for Arpege is still decorated with the original motif by Paul Iribe of a mother bending over her daughter.

Always aware and alert to what was happening, Jeanne Lanvin first realised in 1922 (the year when La Garçonne ,“The Bachelor Girl,” by Victor Margaritte was published) that the intrusive hat laden with trimmings that she had always shown was not in the mood of the day. She willingly adapted her aesthetics to the sporty, boyish young looks that chic Parisians wanted by giving them the cloche — one of millinery's most enduring fashions, loved for its chic, but also for the sense of freedom it brought. It was the standard fashionable hat for almost 10 years. But, with her hats, as well as her clothes, she loved the softening effect of trains, scarves and veils to bring a sense of mystery and allure. She also had her surreal moments — a hat featured everywhere in 1938 in the form of a chicken on a nest was worthy of Schiaparelli.

One of her great coups came in the thirties when she received an order for party dresses from Queen Elizabeth, for the princesses Elizabeth and Margaret. Lanvin sent with them a doll dressed identically, a gesture that became a tradition with mother and daughter looks, but was not carried over when she started to design for boys.

It could be claimed that, despite the many pioneering ideas Jeanne Lanvin introduced to fashion in the ‘20s and ‘30s, the most beautiful and romantic was her way with the Robe de Style, a formal dress for eveningwear made to the highest standards of French couture. In the 20s, she made it a soft, erotic garment, mainly loose to the body and frequently fringed or incorporating narrow scarves to accentuate femininity. A clean, uncluttered silhouette, it was enlivened by embroidery and beading — both strong trademarks of the house — as well as ethnic inspirations from Egypt and classical Rome and Greece.

As fashion moved into the ‘30s, the softly floating Robe de Style was gradually superseded by a new style, more formal and statuesque. Again Jeanne Lanvin was at the forefront. She made it quite clear that, in opposition to Chanel's utilitarian approach, she believed in romantic clothes. As she told Vogue in 1934: “I act on impulse and believe in instinct. My dresses are not premeditated. I am carried away by feeling, and technical knowledge helps me make it a reality.”

She could have added “and fresh”. As early as 1923 she had invested in a dye factory in order to get the exact colours she needed: pinks, greens and blues, dramatic combinations of red and black and a wide use of silver. Her Robe de Style in the ‘30s had wide, panniered skirts straight out of portraits by Velaquez. Like all of her designs, it was romantically feminine.

Jeanne Lanvin lived to be 79, dying in 1946. Although by then her creative spirit had begun to die, it is to the previous decades we must look to see her true quality. She was, by any standards, a leading figure in French couture for most of the twentieth century and her name is still honoured today.