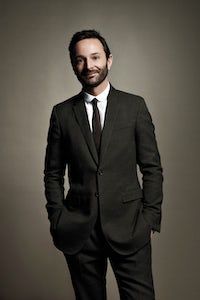 LONDON, United Kingdom — "Across the globe there are millions of men who know nothing of Mr Porter. The challenge is to find them and to get them to try it,” says Jeremy Langmead, who, on Monday, returned to the men’s fashion and lifestyle e-tailer, owned by the Net-a-Porter Group, in the role of brand and content director. Langmead was previously Mr Porter’s editor-in-chief, working there from its launch in 2011 to 2014, when he left the business for the position of chief content officer at auction house Christie’s.

Of course, the Net-a-Porter Group is set to merge with Yoox, creating the world’s largest online luxury retailer with combined sales of 1.3 billion euros. “That is why I am excited that two huge companies, Yoox and Net-a-Porter are uniting,” continued Langmead. “What huge power and global coverage that brings —and just at the moment when more and more men are coming into the e-commerce space. And if this means more competition, I am happy with that. I thrive on competition. For me it is the most stimulating thing in the world. All my life, I have been driven to be first.”

Born in November 1965, Langmead’s early years were spent in a small village in Norfolk in the English countryside. When he was a schoolboy, Langmead and his younger sister accompanied their mother and her new husband to Oslo. But not speaking Norwegian, the children retreated into the world of literature, becoming voracious readers. Langmead swears that he read all of Dickens before he was ten. “I lived in my head; my imagination was all I had.”

Back in England, it was his decision to take a foundation year in art at Hastings (he was in the same group as the artist Jake Chapman and the photographer and filmmaker Sam Taylor-Johnson) that set him on his true path. "I found it very freeing after all the rules and regulations of boarding school," he recalls. It was then that he also discovered the power of print through magazines like Blitz, 18 and The Face, all of which he devoured.

It seems almost inevitable that Langmead’s next move was to Saint Martin's School of Art. “The right place for the right time and the only place to go,” says Langmead of his choice. Although he applied for the fashion [design] course, he was deflected onto the journalism course with the proviso that he must study fashion design before he took it. He did so in the evenings, learning the rudiments of cutting and making up garments, preparing for what he already knew he wanted to be: a fashion journalist.

Throughout his art school years, while discovering the hedonism of the London club scene and coming out as gay in the process, Langmead meet a number of editors at fashion titles. He managed to get a job as assistant for the menswear supplements of British Vogue, styling stories. “It was amazing, exciting and fun, but basically donkey-work carrying shoes and clothes-samples back and forth to Paris. Bonkers clothes! Suitcases full of glittery, shiny Mugler and Gaultier menswear!”

But Langmead soon decided that it was words, not styling, that interested him. His break came with a job on the short lived title Mirabella, where he met India Knight, his future wife, and fell in love: “She was so funny, beautiful and intelligent that I can genuinely say her gender seemed entirely irrelevant. We went to Tangiers, where she made the first move. I was far too timid and unsure of the sexual situation, but it was marvellous and when we knew she was pregnant (with the first of their two sons) we married and lived together for six years.”

Langmead easily found work at titles such as Elle Decoration, Tatler and later as a sub-editor at The Sunday Times. A job advertisement for the editor of The Style Section of The Sunday Times was the thing for which he subconsciously knew he had been waiting. "Only twice have I had that feeling in my stomach that said that was the ideal job for me," he explains. "The Style editorship, for which I wasn't even interviewed, and the job, much later, at Mr Porter. The moment I heard about it I knew I had to have it."

However, as a pragmatist with a strong entrepreneurial streak, Langmead has never cried over lost opportunities. “I learned that determination was the best weapon in fighting back and preserving your self esteem.”

Langmead eventually got the editorship of the Style section of The Sunday Times, and became the editor-in-chief of its fashion supplement Style, between 1995 and 2001. Langmead knew what he wanted to do and set about making Style the country’s top fashion authority. He loved the power and opportunity that London in the 1990s represented, with its powerful music scene, parties, Elizabeth Hurley — all of which were the backbone of Style along with the fashion, of course.

Langmead has always known when to move on and so he did. He went to Nova for a year in 2001, The Evening Standard for another year in 2002 — “hard work but I loved the speed and immediacy of it”— and then Wallpaper for four years in 2003, where he says, “I felt more of a businessman than an editor and I found it very exciting.” In 2007, he went to Esquire, where he stayed for over three years and it was there that he first heard about Mr Porter. For the second time he had that feeling in the stomach. “This is the one. This is me. It came at exactly the right time,” he says. “I was becoming increasingly interested in the industry and finding the business side very sexy.” He hoped that Natalie Massenet, founder of Net-a-Porter, would get in touch. “I knew she was aware of who I was and what I was doing so I thought, if she wants me she will get in touch! And she did.”

You can never talk fashion to a man. You have to talk to him as you would to a man in the bar. Men are basically interested in things that make their lives easier.

What interested him was the fundamental question: "How do you talk to a man about fashion?" There is not, as he found, an easy answer. Women like to shop and talk about it. Men do not. "You cannot say to a man 'Here are the five must-haves this season.’ You simply can't. In fact you can never talk fashion to a man. You have to talk to him as you would to a man in the bar. Men are basically interested in things that make their lives easier."

Langmead worked at Mr Porter for over three years, during which he was bombarded with job offers. The auction house Christie’s, aiming to set up an online content hub, was especially persistent and eventually presented him with an offer he could not refuse. Langmead says that it wasn't the money that clinched it, but the thought of creating something bold, new and far reaching: “I went for it. I love adventure. And I did a lot in a year. Then we had a memo: 'We must slow down the speed of change.' That was anathema to me. Imagine Steve Jobs sending a directive to slow down." And so Langmead returned to Mr Porter at a time of distinct change for its owner.

“Although the power in numbers is very good, the skill sets that Yoox and Mr Porter have are quite different. We have a lot of autonomy at Mr Porter. The business has done well, very quickly, and Natalie and the management are pleased with what we have done. The three businesses — Net-a-Porter, The Outnet and Mr Porter run quite independently — although [they] have some shared resources and come together to share expertise and insight and for big cross-brand projects that talk to both male and female customers."

At this stage Langmead is closing no doors for Mr Porter. A brick-and-mortar store rollout? Why not? A Mr Porter own-label range? Entirely feasible. But, as he points out, "It is content that opens a door on an e-commerce site. And it is content that brings context [to the product]. The question that must always be answered for men is why should I buy? What will it do for me?”

“There is no point in the content unless you are marketing it,” he adds. “We can no longer be passive, waiting for guys to find our website, shop or whatever. We have to get the story to them. That's why marketing and content are so vital and must work in tandem.” Langmead intends to begin his second tenure by working closely with the marketing department to kick-start some “new creative marketing projects, then delve straight into the June menswear shows.”

"My dream today is this: I want to make Mr Porter synonymous with universal life. It will be fun, but challenging. There will be rivals but, as I learned in newspapers, rivals are there to give you the drive to beat them. This is a huge opportunity to make men's lives more interesting and easier — and their wardrobes better."