John Lobb has been producing shoes in the English town of Northampton since the mid-19th century. Now, the revered shoemaker is set to grow. But how do you scale a brand with a business model rooted in traditional craft?

NORTHAMPTON, United Kingdom — No fewer than eleven rivers dissect the countryside surrounding Northampton. From the river Avon’s tortuous upper-course, habitually prone to breaking its banks, to Rains Brook’s shy babbling, the area’s unique topography, which supplies the constant streams of rushing water required to tan leather, has defined the English town and its inhabitants for centuries.

“The visitor to Northampton will at once be reminded, by the leather aprons and grimy faces which haunt the streets, that he is in the land of shoemakers,” says Murray’s Handbook for Travellers, published in 1878. It’s a fitting description of a town where, at the close of the 19th century, it’s estimated that half of the 87,000 inhabitants worked in the shoemaking industry. Many were skilled labourers, capable of crafting welted shoes, made using a traditional method that allows them to be resoled repeatedly. But of so many, few remain.

Only a handful of British shoemakers, such as Edward Green, Church’s, Trickers and Crocket & Jones, along with Paris-based Berluti and JM Weston, continue to manufacture welted shoes to traditional standards. Prada Group, which owns Church’s, has invested significant sums in the brand, opening 18 new stores since 2001, while LVMH is currently in the process of recasting Berluti as a full-blown lifestyle proposition. And yet the most revered of all welted shoemakers, the Northampton-based John Lobb, has yet to expand with the same impetus. Until now.

“We are a £25 million (about $40 million) business worldwide, which, all things considered, is small, and small is sometimes beautiful. But small can also expand to being bigger,” said Renaud Paul-Dauphin, chief executive of John Lobb since 2007 (and an employee of its parent company, Hermès, for twenty-five years), over the din of the shoemaker’s Northampton factory. 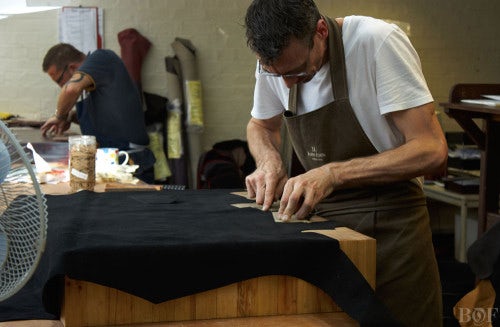 Traditional craftsmanship is the essence of the John Lobb brand. Its factory is startlingly hive-like, alive with the noisy buzzing of chattering machines, the sounds of well-aimed hammer blows and the flap of buttery leather as it is unrolled by one of eighty-five expert pairs of hands, each playing their specific roles in crafting some of the finest shoes in the world.

But how is it possible to grow a brand with a business model rooted in traditional, labour- intensive craft, while maintaining its essence?

Certainly not by compromising on the quality of production. “We will be achieving that by expanding our core business, opening up distribution — but the prerequisite, of course, is to have a sound and strong production facility,” explained Paul-Dauphin.

At the apex of John Lobb’s product offering is its bespoke service, where prices start at about $7,000 for a customer’s first pair of welted shoes, which require craftsmen to complete 190 distinct steps to produce. The company’s by-request and made-to-measure services use the same production techniques, but leverage standardised lasts, the foot-like forms used to define the shape of a shoe during the manufacturing process. Both require interaction with a John Lobb representative to take personal measurements and consult on the product. The brand also offers ready-to-wear welted shoes, constructed using standardised lasts and available to buy straight off the shelf.

The growth generated from the Northampton site will be “coming from these ready-to-wear welted shoes,” revealed Paul-Dauphin. “Bespoke is very much haute couture. You can’t make a living out of bespoke.”

At John Lobb, production of ready-to-wear welted shoes has already grown. “Today we’re making profit. John Lobb was not making profit a couple of years ago,” said Paul-Dauphin. “From where we were two to three years ago to where we will be in five years — you’re talking about doubling the volume. In five years, our objective is to grow the business to between £50 million and close to £80 million.”

But this kind of growth is still finite. “There is a physical limit to what we can produce in this factory. We believe it would be unrealistic to do more than 1,000 [pairs of shoes per week]. We don’t have enough space, but that doesn’t preclude us from buying another factory for welted [shoe production],” he said. “All things are open.”

In order to increase productivity in its existing space, John Lobb will streamline its operations. “There [is] a lot to gain from efficiency, productivity, all of that. First, the objective is to take [time to market] down to ten weeks from eighteen,” said Paul-Dauphin. “More than that, we can do things a bit more cleverly or efficiently, training people even more than we have; keeping the value of what we do, but not being afraid to question it and do it better,” in essence, maintaining the craft, but doing it more intelligently.

John Lobb also plans to expand its product offering beyond welted shoes. The company already sells non-welted ready-to-wear shoes, sourced in Italy, as well as ties, belts, small leather goods and socks. “Non-welted shoes are something we strategically wanted to grow, because it has to do with the market and the John Lobb customer’s expectations,” he said.

But this does not mean abandoning the core values of the brand. “I am going to grow my non-welted business as much as I need to accelerate the turnover of the welted shoes,” explained Paul-Dauphin. “Otherwise I would kill the business model, which is very much built on know-how. I don’t want to lose that. You have to have a certain balance.” 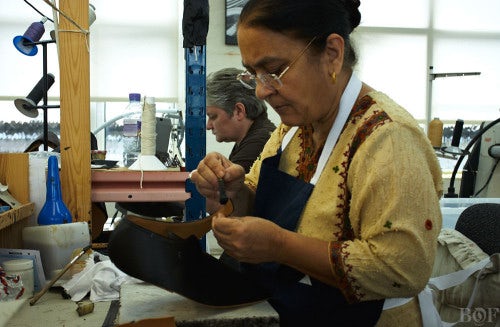 Paul-Dauphin also has plans for reshaping the company’s retail strategy, a move which will further boost revenues. About 75 percent of the business is direct-to-consumer, while the remaining 25 percent is wholesale. “I intend to increase the direct retail component to 90 percent,” he said.

The brand currently has 15 directly operated stores and 7 concessions. Although present in North America and China, John Lobb’s retail presence is heavily weighted towards Japan and Europe. Accordingly, geographical expansion is a critical part of the growth strategy. “Today, the expansion of our business worldwide has huge potential. China is only the beginning for us; in North America, we have only two stores; South America, no distribution. I’d like to stay focused on where we are — and expand on that. We will do it in our own way and in keeping with the know-how of the company.”

In December of last year, John Lobb opened directly operated stores in Tokyo and Shanghai, as well as a concession in Hong Kong; in 2014, it plans to open a fifth store in China, located in Shanghai, a third store in the US, located in Houston, Texas, and a boutique at Charles de Gaulle airport in Paris.

But if the balancing act of realising John Lobb’s global potential whilst retaining its craft- focused heritage and core values seems a challenge, its parent company Hermès offers proof that it’s indeed possible.

“Pierre-Alexis Dumas [artistic director of Hermès] told me the other day that John Lobb is like Hermès was in the 1960s [when] it was focused on silk and leathers and there were other satellites to its business,” said Paul-Dauphin. “Axel [Dumas, chief executive of Hermès] and Pierre-Alexis look at John Lobb as a gem. Hermès was founded in 1837 and John Lobb in 1849. You have to pay respect to what they originate from: the backbone, the savoir-faire, the craftsmanship that is shared.”

Whether the companies’ shared culture will be enough to enable John Lobb to follow in the footsteps of Hermès remains to be seen.