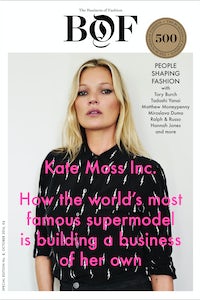 To pre-order your copy of the BoF 500 special print edition, click here.

HYDRA, Greece — For almost three decades, Kate Moss has been one of the most recognisable, most photographed and most talked about people on the planet. She has graced more covers of Vogue around the world than any one else — so many, her team does not have a final tally — and has been the face of countless brands, notably Calvin Klein, for which she appeared in some of the most controversial and influential advertisements in fashion history.

From her earliest shoots with Corinne Day which helped to launch fashion’s grunge movement to the glossy Mario Testino campaigns which helped to reinvent Burberry to her most recent work with Adidas and Supreme targeted at millennials, Moss has demonstrated remarkable tenacity and longevity, growing from a shy and skinny 14-year-old from the London suburbs into one of the top-earning models in the world for over two decades, surviving — even thriving — through fiery controversies, personal crises and rehab.

Today, Moss is the only one of the 1990s-era supermodels who still has an active and lucrative career in modelling. According to analysis conducted by Forbes, she earned $5 million between June 2015 and June 2016, ranking her 13th amongst the 20 highest earning models in the world. This may be less than in years past, when Forbes says she earned up to $13 million or more, but at 42, Moss is the oldest model on this year’s list and has the longest uninterrupted streak at the top the modelling game, making her one of the richest women in Britain with a net worth estimated by the Sunday Times to be more than $75 million.

But, if you’re Kate Moss, already one of the world’s most famous fashion icons, what do you do next?

Earlier this year, Moss took the industry by surprise when she left Storm Models after 27 years. Instead of going to a rival agency, however, Moss brought her agenting in-house and quietly began acting on a plan that could transform her from supermodel to budding businesswoman.

“It’s a grown-up thing,” she says reflectively. “I felt like I wanted to do things that were more than modelling. It didn’t matter how much we would try and do it together with them, I was always going to be the little Kate that they’ve known since I was 14,” she explains. “It was like leaving home. I had to leave, and they were very understanding about it. They were like, ‘Yeah you’ve got to go now, we’ve done as much as we can do.’ I wanted to spread my wings.”

Moss says this decision has altered the way she sees herself; no longer just a model for hire, but someone in full control of her own destiny. “I didn’t realise how much it was going to change the way I feel because it is like taking responsibility for my own [business], whatever I do, instead of being the model who’s being sent on jobs to turn up and just be whatever they want you to be.”

This month, Moss is launching her own talent management agency: Kate Moss Agency. “It’s a dream! It’s so weird,” she laughs, at the prospect of spotting and backing new faces. “You know that film Gia? Faye Dunaway plays the agent. I could so do that! But I want to focus more on managing people’s careers than just [running] a modelling agency. I don’t really want pretty people, I want people that want to sing and dance and act — I want to create stars,” she says.

At first, the agency will work with a handful of as-yet unnamed talents and represent them as models. To make her vision a reality, Moss has quietly been building a small team to work alongside Lucy Baxter, her longtime booking agent, who also left Storm earlier this year.

The supermodel-turned-businesswoman is also expanding the Kate Moss lifestyle brand with a string of new collaborations and projects set to roll out this later this year. The move is a natural extension of her previous work for the likes of Topshop, Longchamp and Equipment, all of whom have banked on her brand power, working with her during her time at Storm to launch new products bearing her name.

“For them I think it was still about money, whereas I’d rather do something I was really proud of as a product rather than the ka-ching,” says Moss. “As a modelling agency, they book models to do a job. You’re not as associated with the brand, you’re just the face-of. But to do a collaboration and put your name on a product is a big thing for me. It’s something I need to believe in.”

Moss realised she needed a manager — not an agent — to think more strategically about her business partnerships and align them around a longer-term strategy. Earlier this year, she appointed Camilla Johnson-Hill of The Production Club her brand and business manager. “It was really the right time. I’d thought about it for a couple of years because I’ve collaborated with other people and stuff. Then I met Camilla and it was the right time for her too. It was so perfect to get somebody that understood me and what I wanted to do and where I wanted to go with it,” Moss explains. “She’s a doer. I love doers.”

But this doesn’t mean Moss will be giving away any decision-making power. “Kate makes all her own decisions. She's the CEO. I bring things to the table and add some things and help shape things, but every project is hers,” clarifies Johnson-Hill. “One thing that I've learned about Kate since I've been working with her is that she will not do anything that doesn't seem authentic to her. Every project is led by her, creatively and business-wise.”

But in the age of so-called ‘Instagirls’ — including Kendall Jenner, Karlie Kloss and Gigi Hadid — the agency will quickly need to develop its social media expertise. “They've definitely got another side with it, like the Instagram side, and they know their business I think, and are really aware,” acknowledges Moss.

Moss herself has not had an official social media presence until now, but the agency’s new Instagram account (@KateMossAgency) will focus on Moss as well as her new protégés, eventually consolidating more than one million followers from hundreds of fan accounts.

“There will be pictures of Kate, pictures that Kate has chosen and pictures of the other models that the agency represents. I think it will be kind of feeling it out as we go along, and not strategically planned. It kind of will come from the heart, but it will definitely be Kate's vision, not just pictures of her, but Kate’s vision.”

To be the first to read the full interview with Kate Moss, pre-order your copy of the 4th annual BoF 500 print edition featuring the people shaping the global fashion industry at shop.businessoffashion.com.