Editor-in-chief Stefano Tonchi tells BoF about a new chapter at W as Grand signs on as contributing fashion creative director, following the departure of Edward Enninful to British Vogue.

Editor-in-chief Stefano Tonchi tells BoF about a new chapter at W as Grand signs on as contributing fashion creative director, following the departure of Edward Enninful to British Vogue.

New York, United States — W Magazine is expanding its community of core creative contributors with one of fashion's biggest names. Instead of directly replacing former fashion and style director Edward Enninful — who will begin his post as editor-in-chief of British Vogue in August — the Condé Nast media brand has confirmed that beloved stylist, creative director and editor Katie Grand is signing on as contributing fashion creative director.

Grand will style fashion stories and help editor-in-chief Stefano Tonchi conceptualise special issues and editorials while continuing her role as editor-in-chief of Love, the magazine she founded in 2009. In addition, W has hired Vogue’s Sara Moonves as style director and Rickie De Sole has been promoted to fashion director.

When considering how to replace Enninful, Tonchi says Grand was at the top of his list of talent. “We share a lot of values and I love her enthusiasm,” he tells BoF, adding that his background in independent magazines and familiarity with the British media scene where Grand first made her name — she co-founded nineties fashion bible Dazed & Confused with Rankin and Jefferson Hack before launching Pop magazine in 2000 — makes them natural collaborators. Grand’s irreverent and distinctive eye, her relationships with fashion’s most talented photographers and her understanding of the kind of visual content that resonates online will also prove to be an asset for the magazine. 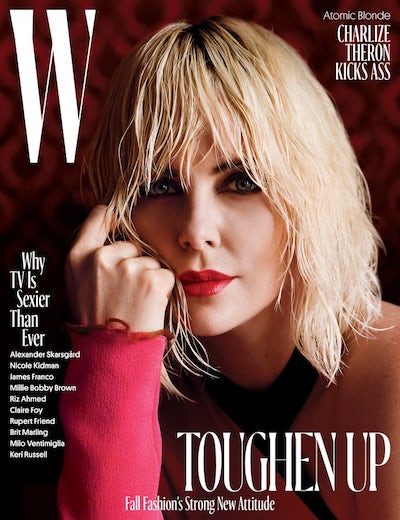 “I've bought W since I first started buying magazines,” Grand tells BoF. “I was a huge fan of Michael Thompson's covers in the nineties and Miles Aldridge covers with all the supermodels when he first started taking pictures. It's a great American magazine with so much fantastic history.”

But few creative directors like Grand, who was a rumoured candidate for the top job at British Vogue, are willing or able to commit to full-time to single publications in today’s market. “A lot of people don’t want to be pinned down in a specific place,” says Tonchi, citing Grand’s many projects across editorial (contributing to Vogue Paris, Vogue Italia, Industrie, Interview and more) and advertising (for Louis Vuitton, Prada, Miu Miu, Tom Ford, Loewe and many more). She is also known for her longstanding creative partnership with designer Marc Jacobs, which whom she works on runway and campaigns.

“I started thinking about a structure that would let talent come in and give their best, and also to have a more kind of reliable core here at the magazine,” says Tonchi. “We nurture talent and we give them the space to really flourish. And that’s our function inside the company, too.” Indeed, two of Tonchi’s past editors, Enninful and former fashion market and accessories director Karla Martinez Salas, have been poached to helm magazines elsewhere in Condé Nast’s portfolio. (Martinez Salas is now editor-in-chief of Vogue Mexico and Latin America.)

“In a moment like this, it’s important to share the talent,” says Tonchi. “I am very happy to take [Moonves] from Vogue and give her a larger stage. My editors went to work for great Condé Nast titles… it’s this idea of sharing talent and sharing resources and coming together to put out the most memorable images.”

Grand joined the Condé Nast family back in 2009 when Condé Nast International chief executive Jonathan Newhouse invited her to launch her own magazine. The bi-annual publication Love has become a platform for famous names to take risks through fashion and a launchpad for new faces, such as Lily-Rose Depp and Kendall Jenner.

Moonves, currently contributing fashion editor at American Vogue, is also known for her work with a new generation of models and photographers, and Tonchi highlighted her relationships in Hollywood as an important asset. She will style shoots and cover the collections.

W magazine has been led by Tonchi since 2010 and is set apart on the newsstand by its oversized pages, provocative and bold editorials, and high-gloss coverage of fashion, film and art. The magazine is one of the smallest in Condé Nast’s US portfolio with an average paid and verified circulation of 457,962 in 2016. September’s issue sold 463,895 print and digital copies versus 33,614 the same month three years prior. In June 2017, W’s website registered 1.8 monthly unique US visitors, up from just under 1 million the year before, according to ComScore.

“Because we are smaller in the distribution, we are more experimental,” says Tonchi, who has worked over the last several years to transform W into a more collectible, premium print product. October 2016’s “his-and-hers” issue, with ten different covers, is an example of a new and ongoing initiative.

To that end, the magazine is adding an additional holiday issue to its schedule, bringing the print frequency up to 11 per year. Tonchi says credit for the decision goes to the magazine’s ‎chief business officer Chris Mitchell, who introduced a holiday issue at Vanity Fair.

“We want to restructure the calendar in a way that you have a magazine when there is a need for it, when you can put out something special and something thick and something with a strong presence — and not just have it at the end of the month because you have to have it,” says Tonchi. “It’s a new world, we have to think about print in a new way.