Kim Jones' Gospel at the Church of Vuitton

PARIS, France — The staging of this season’s Louis Vuitton menswear show was nothing short of ecclesiastical: a steeple of fresh cut pine bordered the runway’s exit, a singular adornment in a room almost entirely constructed of glass. 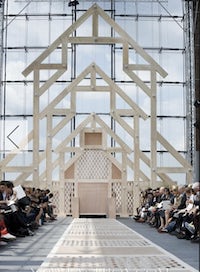 If, incredibly, the symbolism was somehow lost on anyone, designer Kim Jones reiterated his point by choosing REM’s ‘Losing My Religion’ to accompany a collection of soft grey tailoring and sportswear-inflected daywear suitable for the Vuitton man.

Suits with checks of varying proportions, from tight Prince of Wales to broader plaid, in a litany of greys and colbalts dominated much of the collection. The urban aesthetic that ran through Jones’ previous collections under his own name appeared fleetingly, curtailed to a single exit, a hooded bomber and shorts in a print not dissimilar to Phoebe Philo’s Céline laundry bag for women last season.

Jones was clearly in a primary colours mood. Aside from the multitude of blues and his foundations of black, grey and brown, he introduced a sports-field-pennant red, initially through a sports coat with a Western mood and a touch of the Seventies, fit for the Marlboro Man’s football playing son.

Far more interested in the uniform attraction of check and stripe and the impact of the emblematic, Jones continued to feature print only sparingly. This season’s confection of blue tiles or perhaps Islamic prayer mats, in the shades of the Levant’s mosques, and inkblot dilutions, black on blue, or blue on red, played out on tunics suitable for Beirut’s climate and textured work wear.

Butter soft hoodies, blousons and varsity jackets were cast in leather, accompanied by a smattering of exotic skins. Outerwear was casual, including parkas festooned with Vuitton badges, properly functional thanks to Jones’ sincere attention to practical detail.

But what was Jones’ holy point? A nod to the apotheosis of Louis Vuitton, the maison, achieved through a billion shares, tweets and Likes, perhaps.

Whatever it was, Jones has not lost a religion; he has crafted one. Unfettered by a legacy to reference, in just 6 seasons Jones has created a multitude of menswear signatures for Vuitton: T Bar zips, lapel pins, the inverse triangle tricolour emblem. No longer is Vuitton’s only legacy that of travel.

This season it was the accoutrements of its fresh legacy, not the Masai scarves, or boating emblems of its past, which Jones displayed. And tellingly, he reworked the show order for the finale. The final image: a tricolour descending into the depths of his newly built church.