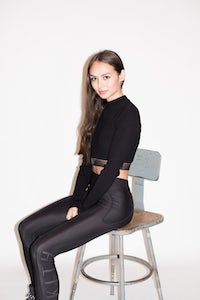 Oberg, whose rabid following among streetwear enthusiasts has earned her “influencer” status, will oversee the entire women’s division, developing product from start to finish. Oberg will work alongside the women’s design team, who will help realise and execute her direction.

Oberg’s appointment relates to her natural appeal and authenticity, a value important to Kith, according to Fieg. Prior to Oberg’s hiring, Fieg handled creative for both the men’s and women’s lines.

“My biggest obstacle when I started the women’s line was that it doesn’t feel authentic for me to really go out on social and be the voice behind the women’s brand,” Fieg said. “I feel like the women's side needs a voice and direction from somebody who will be wearing the product. We think that Emily represents the youth and has her finger on the pulse… she has great taste and I think she fits our aesthetic and where we’re going as a brand.”

The women's side needs a voice and direction from somebody who will be wearing the product.

Oberg, a 23-year-old Canadian expat, was most recently an on-camera anchor at Complex, where she held a three-year tenure prior to leaving in late January. Oberg completed her first assignment with Complex as a stylist while still living in Vancouver, Canada. Pleased with the results, Complex then offered her a news anchor position where she consequently amassed a sizeable, and engaged, social media following during her stint. With more than 200,000 followers on Instagram, her posts generate hundreds of comments and thousands of likes. (Oberg estimates her following grew 20-fold while at Complex.)

All the while, Oberg launched her own lifestyle brand, Sporty & Rich. The shoppable basics such as t-shirts, dad hats, and sweatshirts — all embroidered with the brand’s moniker — originated out of Oberg's interest in fashion's embrace of the high-low look. The latest element is a print magazine, which launched in May, with a second issue set to drop soon. Oberg said she will continue her Sporty & Rich line while at Kith, although she says that there are no current plans to stock the product at the retailer.

"Emily has become a force and a personality in the industry because she represents exactly where streetwear is at in 2017,” explained Lawrence Schlossman, brand director at menswear resale site Grailed (and a former Complex staffer). "Streetwear a couple of years ago, maybe even as recently as three or four years ago, was this thing that high fashion wouldn’t touch. Now, these two kind of disparate worlds are overlapping now more than ever. Emily has an innate understanding of that aesthetic: how a pair of Nike Airmaxes can be worn with a Céline coat and a Chanel bag."

Oberg’s new role will blend much of her previous experience and existing interests into what she calls her “dream job”—one where she can “really create something and have an influence and say in this industry.”

But having influence and being an “influencer” are incongruous, according to Oberg.

“I hate that word. I think it’s become so tacky and it’s just some kind of thing where there’s people with large followings but they don’t actually do anything or possess any skill or real talent,” Oberg said. “Maybe building a following requires a little bit of talent, but I don’t think its sustainable, and I think in a few years when Instagram is no longer a thing, because that will happen, they’re going to be shit out of luck.”

Semantics aside, Oberg’s influence is hardly up for debate. This past spring, she made headlines when her design was repurposed by Forever21 on sweatshirts that read Smart & Pretty and suspiciously resembled Sporty & Rich merchandise. In addition to Sporty & Rich, another important aspect of Oberg’s brand is her penchant for fitness. The perfect pairing for her streetwear obsession — in many cases, such garments are made for athletic purposes — she says her successful Complex video series "Get Sweaty," in which she works out with celebrities such as Erykah Badu and DJ Khaled, will continue.

Kith declined to reveal numbers regarding revenue and expected business projections, but its expansion is well-documented. In addition to its five existing brick-and-mortar shops — men’s and women’s shops across the street from one another in Soho, a store in Brooklyn, a store in Miami, and a permanent shop on Bergdorf Goodman’s third floor — the brand has plans to expand its retail presence in the near future. Such plans are architected based on the demand for more women’s products.

“This year, we’re planning on extending the space for women. And with our move to Miami, we’re seeing a really big demand for our women’s products,” Fieg said. “We’ve already had a good amount of demand, but now being in Miami and what we’re going to do in New York in the near future, there’s a real opportunity for our brand to expand… I can’t really speak on it yet, but we are planning on doing something this year to expand on the retail basis.”

Kith confirmed it has new brand partnerships in the works but declined to give details, citing the “surprise element” of drops as a key to its success.

For Oberg, the ultimate goal in her new vocation: “I hope that it’s so good that the men want it.”