The tragedy has left millions of fans in mourning — and some in search of his signature sneakers. As prices for rare pairs climb into the thousands of dollars, resale sites are weighing what separates homage from profiteering.

The tragedy has left millions of fans in mourning — and some in search of his signature sneakers. As prices for rare pairs climb into the thousands of dollars, resale sites are weighing what separates homage from profiteering.

NEW YORK, United States — The death of basketball icon Kobe Bryant in a helicopter crash Sunday has touched off a global outpouring of mourning, from tributes at NBA games to the Grammys to tens of thousands of anguished posts by Chinese fans on Weibo.

Some sneakerheads had a different way of remembering the athlete’s legacy. Within minutes of the first media reports of Bryant’s death, a pair of Adidas Crazy 97 “Kobe Bryant Slam Dunk Contest” shoes sold on resale platform StockX for $1,199 — a 600 percent increase over the previous sale nine days earlier. The story was much the same in China, where a spike in prices for Bryant’s “Kobe” and “Mamba” lines for Nike triggered a flood of accusations that resellers were making money off of his death.

The unexpected tragedy has created a dilemma for the sneaker resale market, which has grown into a multi-billion-dollar global industry in recent years.

“This is the first dead former-NBA superstar in sneaker culture,” said Brian Nadav, the owner of Philadelphia sneaker boutique Lapstone & Hammer. “There’s a big backlash in this sneaker community over profiteering.”

Resale platforms don’t want to be seen as enabling users to profit off the death of a beloved celebrity but are also reluctant to interfere in the freewheeling marketplaces that drive their business. It was business as usual at StockX and other sites. Shoji Ueki, the head of marketing at luxury resale site Grailed, said searches for Bryant merchandise on the site over the last two days "were on par with the previous 3 months combined." By Tuesday, all Bryant merchandise on the Nike website had sold out

However, at Stadium Goods, Chief Executive John McPheters told employees in an internal Slack message viewed by BoF that the site would stop accepting new Bryant products on consignment “for the time being,” adding that the company was “not trying to contribute to the after-market profiteering taking place with his passing.”

There’s a big backlash in this sneaker community over profiteering.

In China, several sites pulled listings of items related to Bryant after a swell of outrage on social media. One, Poizon, issued weeklong suspensions for 37 accounts. Major American sites that were still selling Bryant shoes on Monday refrained from actively promoting them. Resale site Goat's homepage was rendered black with “1978-2020,” the years Bryant lived, displayed in white lettering.

“As is the case for any live marketplace, real-life events have ramifications on market performance,” StockX said in a statement on Monday. “Following the tragic news of Kobe Bryant's passing, there was a surge in interest in products related to the basketball legend, including some of his most noted sneaker collaborations. The increased interest is a testament to his impact both on and off the court.”

On Tuesday, StockX said it would donate all proceeds of Bryant merchandise made the week of the athlete's death to the Kobe and Vanessa Bryant Family Foundation. 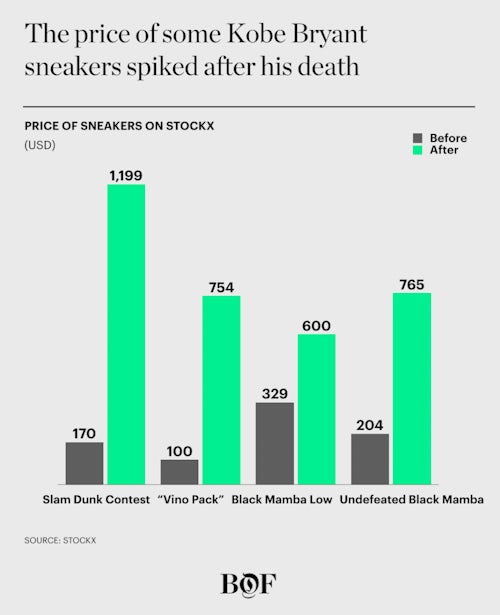 EBay declined to comment, while Goat and Fight Club did not immediately respond to requests for comment.

In Denver, sneaker and consignment boutique Vices pulled all Bryant product from its floor and website, notifying consigners it wanted to wait until the mourning period died down.

“A lot of shoes are going up in value, which is kind of sad and we are not trying to profit off of someone’s death,” Kamau Ray, a sales manager at Vices told BoF. “We are fans who grew up watching him play and we collect his shoes, and so it hurts that other people think about making money off of a tragedy like this. Of course, as a store, we want to make money, but we need to draw the line.”

Ray said Vices would eventually restock the shoes and sympathised with fans that wanted to buy merchandise as a way to commemorate the beloved NBA star, but said selling the product right now didn’t feel right.

Urban Necessities, a consignment store with locations in New York and Las Vegas, notified sellers it wouldn’t allow them to increase their price on any Bryant footwear. The announcement was first reported by Complex.

We collect his shoes and so it hurts that other people think about making money off of a tragedy like this.

Widely considered to be one of the best basketball players of all time, Bryant leaves behind a legacy that spans sporting achievements, entrepreneurship, philanthropy and coaching. His 20-year career in the NBA included five championships, 18 All-Star appearances, two Finals MVP trophies and one league MVP trophy. He scored 33,643 points, the fourth most in NBA history.

Bryant signed his first sneaker contract with Adidas before his rookie season in 1996, later signing with Nike in 2003. A standout for the Los Angeles Lakers almost from the start, his shoes proved solid sellers. In its statement, StockX described Bryant as “the most influential basketball player in the sneaker world” after Michael Jordan. However, in recent years, Jordan, LeBron James and a crowded field of younger stars have eclipsed Bryant’s shoes, at least in the US, analysts say.

“Kobe’s sneaker sales were sort of in the middle of the pack,” said NPD sportswear analyst Matt Powell, noting that Bryant’s jersey sales were stronger than his sneakers in America. 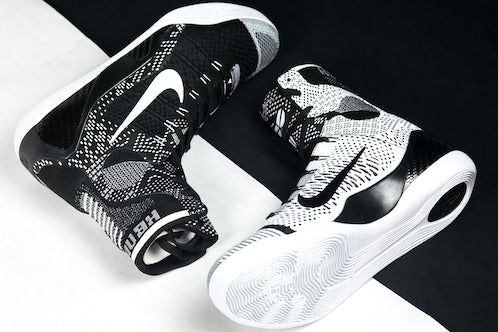 However, Bryant’s sneakers were far more popular in China, and he proved instrumental in helping Nike expand into the country. The sportswear giant was one of the few brands to maintain its endorsement deal with the basketball star following charges of sexual assault against him in 2003. (The charges were later dropped and Bryant settled with his accuser out of court.)

In 2013, the NBA star sold twice as many shoes in China as he did the US, according to a report from Forbes.

Some of Bryant’s earliest shoes are still among the most closely identified with the basketball star. The Kobe 1 for Adidas, a bold, futuristic silhouette that was succeeded by the even more daring Kobe 2, was “a shoe that was not of [its] time ... like a prop from ‘The Jetsons,’” said Highsnobiety Editor-in-Chief Thom Bettridge.

Bryant's Zoom Kobe IVs sneaker, which Solecollector credits for normalising low-top basketball shoes, are another example of the athlete's maverick-yet-influential approach to sportswear.

Bryant was an inherently iconoclastic person, which is what connects him to the culture of sportswear and streetwear in general.

“[Bryant was] an inherently iconoclastic person, which is what connects him to the culture of sportswear and streetwear in general,” said Bettridge. “He belongs in the canon of daring people.”

Nadav, the Philly sneaker boutique owner, said older Bryant merchandise will likely be harder to come by in retail, and more fans will have to buy them via resale. Nadav said he hoped resale businesses would use a “moral compass,” especially when they could set a precedent for how to respond to the deaths of future NBA stars.

“Can these third-party sneaker sites sell Kobe shoes for whatever price they want? Yes. But is that the morally correct thing to do? No,” said Nadav. “Prices go up when supply is low and demand is high but inflating prices is not the way to respond.”

Editor’s Note: This article was updated on 28 January, 2020 to include the news that StockX would be donating proceeds of Kobe Bryant merchandise to the Kobe and Vanessa Bryant Family Foundation.

The Battle of the Sneaker Bots