Christelle Kocher, founder of the haute streetwear label, will receive a grant of €250,000 and mentorship from OTB boss Renzo Rosso. 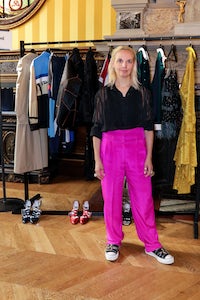 Christelle Kocher, founder of the haute streetwear label, will receive a grant of €250,000 and mentorship from OTB boss Renzo Rosso.

PARIS, France — Christelle Kocher, the 40-year-old founder of the haute streetwear label Koché, has scooped up the ANDAM Grand Prize, thirty years after Martin Margiela, a member of this year's jury, won the inaugural award in 1989.

The prize comes with a grant of €250,000 and a year of mentorship from Renzo Rosso, founder of OTB, the Italian fashion group that owns Diesel, Marni and Maison Margiela.

Koché sells its unique blend of craftsmanship and urban aesthetics at about 60 doors and, last year, generated revenues of €3.7 million.

“Koché mixes craftsman and the couture world with streetwear vibes and sportswear details. Hybridation is part of the aesthetic, the DNA. It’s also a brand that actively defends values such as diversity, openness, generosity," Kocher told BoF. Looking ahead, the designer plans to grow her label to €10 million in revenues over the next two or three years.

“I love Koché. Her approach is modern, sportswear, in the same way as an upcoming new generation of designers,” Rosso told BoF following the deliberation of the jury on Wednesday. “She plans to use the money to launch to the menswear line." Kocher also aims to boost her e-commerce capability. (She launched a new website last week).

In winning the prize, Koché beat out Coperni, Hed Mayner and Kwaidan Editions, which were also finalists. Past winners of ANDAM's prestigious top award include Christophe Lemaire, Anthony Vaccarello and Glenn Martens of Y/Project.

Before founding Koché in September 2014, the Strasbourg-born Kocher, who graduated from London's Central Saint Martins, spent a decade working for luxury houses Chloé, Sonia Rykiel, Bottega Veneta and Dries Van Noten. Along with running her own label, Kocher currently works at specialist feather and flower atelier Maison Lemarié, where she has been artistic director for the past nine years.

After a flurry of collaborations including with Converse and Pokemon on capsule collections, the designer was recently tapped by Nike to create a dress to celebrate the 2019 FIFA Women's World Cup. She has also collaborated with the American sportswear giant on a range of exclusive products set to hit stores on July 7.

“She’s a very talented and prolific young woman,” said Guillaume Houzé, president of ANDAM and Image and Communications Director at French department store chain Galeries Lafayette, which carries Koché at both its flagship location on Boulevard Haussmann and its new Champs-Elysées store.

“It was her moment. Her brand is already mature. It is extremely clear in terms of positioning," said Nathalie Dufour, founder and general manager of ANDAM.

The ANDAM Grand Prize is just one of ANDAM’s four annual prizes that each come with a cash grant and mentorship. ANDAM also offers a Fashion Accessories Prize, a Creative Label Prize, and a Fashion Innovation Award.

"The brand is very interesting in terms of style and impressive in terms of know-how and quality of the final product,” said De Seynes of Khaore. “As part of their project, they want to develop a part of the production in France; I will probably be able to guide them.”

The Creative Label prize, which comes with a grant of €100,000, went to Nicolas Lecourt Mansion, who will also receive mentoring from Xavier Clergerie, founder of Who’s Next, Premiere Classe & Jean-Louis. Galeries Lafayette has pledged to buy Nicolas Lecourt Mansion's two next collections, while Tomorrow London Ltd will offer the ready-to-wear designer additional commercial and strategic mentorship.

“The presented technological innovation brings an important contribution to the development of circular economy," said Morand. "Achieving to decompose fabrics blending various raw materials is a key issue for downcycling and upcycling, and more globally for the future of our industry and the primacy of creation."