SEOUL, South Korea — “The last four or five months have been complete chaos,” admits Jung Kuho, executive director of Seoul Fashion Week. “Everyone is so concerned with politics and the economy that they don’t want to spend their money. You don’t buy luxury goods when there’s this much uncertainty.”

Seoul is home to one of the most important luxury goods markets in the world, an entertainment industry that dominates Asian culture, beauty brands with global reach and a fashion week that sits firmly on the international calendar. But as editors, buyers and street style stars gather for Seoul Fashion Week, the collections this season will be overshadowed by serious political and economic upheaval.

In October, a major corruption scandal in South Korea led to public outcry and widespread street protests which resulted in the recent impeachment of the country’s president Park Geun-hye. Now, in the wake of counter-protests and other domestic instability, a diplomatic crisis with China has emerged. One result of these crises is that related security concerns are deterring both local and foreign shoppers.

According to Bain & Company, sales of luxury goods in Seoul reached $7.6 billion last year. To put that into perspective, it means that luxury sales in the South Korean capital alone are not far off those for the entire Middle East region (at $8.7 billion). Clearly there is a lot at stake.

But last month, Global Blue reported that in January alone, travel retail sales in Seoul declined by an alarming 19 percent year-on-year and by 15 percent year-on-year for January and February combined. Earlier this month, shares of companies trading in cosmetics and travel dropped sharply in Seoul and, in January, the Baidu Index reported a 25 percent decline in growth for Korean beauty brands in China. 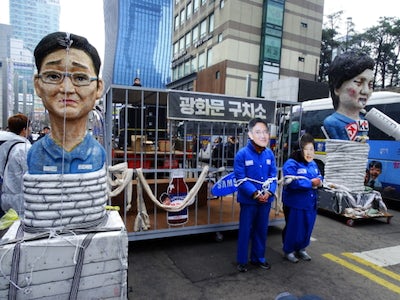 Between a rock and a hard place

At the beginning of March, the first pieces of a US-built missile defence system designed to ward off a threat from North Korea arrived at the Osan Air Base in South Korea. It is called the Terminal High Altitude Area Defense system (Thaad) and China has been particularly vocal in its opposition to it. The reason for this appears to be related to Thaad’s tracking devices, which have the potential to follow China's missile systems and would give the United States an advantage in any potential conflict.

Since the official launch of the programme, the Chinese government has retaliated to what it sees as a military threat by putting economic pressure on Korean firms. Dozens of supermarkets owned by the Lotte luxury department store group have been shuttered across China on the pretext of fire safety; Chinese visitors have been stopped from visiting South Korea in groups; K-Pop bands have been restricted from airing on Chinese television; licences for South Korean video games have been frozen; and even imports of 19 Korean cosmetics products have been refused on ambiguous-sounding quality-control issues.

“The temperature that is felt within China can only be measured by those within the region,” says Inhae Yeo, the director of Oikonomos Fashion Consulting, “But here on the Korean side, there are constant media reports about it and on the Chinese government banning large groups of tourists travelling to Korea.”

China has used these tactics to turn the popularity of Korean products into a method to spark anti-Korea sentiment. The Hallyu wave of Korean culture has been flooding China since 2010, helping to make everything from Korean shoes and lipstick to musicians and actors popular. But now, because of the restrictions on Korean imports in China, the media and ordinary Chinese citizens are being compelled to take a stand against Korean products in the name of patriotism.

Luxury sales in the South Korean capital alone are not far off those for the entire Middle East region.

This is proving problematic for Seoul as China is South Korea's largest trading partner, with exports to the country worth $142 billion in 2014, and cultural products hitting a record $5.3 billion in sales the same year. So understandably, the Korean fashion and beauty industries have become increasingly reliant on both sales in China and the constant influx of Chinese tourists who fly to Seoul primarily to shop for Korean products and international luxury brands.

“At the present, a wide range of Korean industries — not just beauty and fashion — have started to suffer from this strong Chinese national action,” says Julia Juyeon Kang, the editor-in-chief of Elle Korea. “Experts are saying that whether it continues or not depends on our new next government, which can negotiate between China and US.”

Seoul Fashion Week’s Jung agrees: “I don’t think the numbers will pick up until May when we have an election and hopefully then we will get back on the right track,” he says.

Compounding upon the dramatic drop in their largest customer-base, fashion brands in South Korea have also been dealing with a major political fallout. On March 10, Park Geun-hye became the first president of South Korea to be forcibly removed from office. Park was accused of colluding with controversial figure Choi Soon-sil, the founder of the Church of Eternal Life, to extort millions of dollars in bribes from major South Korean firms and allowing Choi to interfere in government matters. 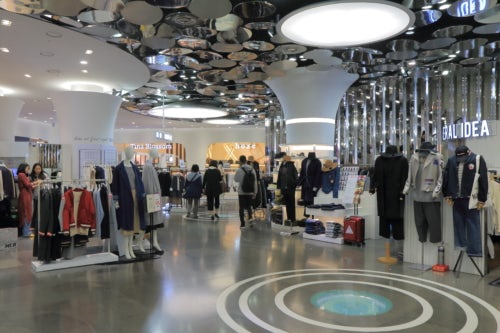 The impeachment was preceded by months of protests both for and against President Park, which led to the closure of businesses, shopping malls and restaurants around Seoul as the public took to the streets. This unrest was undoubtedly another factor in China’s reluctance to allow its citizens to travel to Korea, partly for their safety but also because it is an example of the kind of public demonstration that Beijing both fears and detests.

Meanwhile China is showing no sign of backing down its call for protests against South Korea, which are apparently erupting around the country with videos of bloggers destroying Korean goods going viral and the state-run Global Times running anti-Korea editorials. “We will not sacrifice the national interest for Korean cosmetics,” says one. “We should start increasing sanctions toward Seoul in an orderly way, comprehensively lower the level of Sino-South Korean exchanges [and] roll back all privileges that Seoul has gained from China,” says another.

But can this newfound Chinese antipathy for Korean brands really last? And how widespread is it? There have been suggestions in the Korean press that some of these protests have been staged or at least exaggerated by the Chinese media.

But if they are real and indeed grow, will loyal consumers remain undeterred in the long run?  Korean beauty brands saw an 84 percent year-on-year Baidu Index growth in December 2016, a rate more than double that of Western, Chinese, or Japanese rivals. That growth did sharply decline as the crisis took hold in January, falling below Japanese brands, but nonetheless it has managed to stay ahead of other competitors.

China is showing no sign of backing down its call for protests against South Korea.

“Chinese consumers have continued to show a high interest in Korean brands throughout the dispute,” says Liz Flora, the editor of Asia-Pacific research for business intelligence centre L2.

“But of course, boycotts in the name of nationalism can have a significant impact on brands’ sales — we saw this in the case of China’s anti-Japan boycotts in 2012, and Korean sales are certainly taking a hit. But Japan was able to bounce back after about a year, and saw a massive influx of Chinese tourists in 2015 thanks to the declining value of the yen. This shows Chinese consumers will be nationalist in their consumption habits to a point, but price advantages and higher quality will ultimately win them over.”

However, it is important to remember that Korean beauty brands are in a significantly more powerful position than their fashion counterparts. “Sure, Korean fashion is not yet as popular as Korean beauty [but] within the fashion industry, the delicate designer brands which are hard to find and more difficult for the Chinese to copy, are still highly valued,” says Park Yeon-joo from the Council of Fashion Designers of Korea.

“But due to the restriction order, numerous events related to Korean fashion have been cancelled. So, yes, the chances of Korean fashion brands expanding into the Chinese market have now decreased. Therefore, we’re decreasing the dependency on the Chinese market, and focusing on the so-called 'Post-China market’ of Vietnam, Indonesia, Thailand, and so on.”

According to Yeo of Oikonomos, the continued professionalisation of South Korea’s fashion market and the role of the government will be key to its resilience in the face of recent challenges.

“Fashion is a very complicated industry and there are layers and layers of strategies as well as key points that need to be addressed and developed. This is only possible when experts with experience can come together,” she says, referring to the need to build “network infrastructure” between the public and private sectors.

The sting of anti-corruption legislation

In addition to the current political and diplomatic crises, fashion brands in South Korea have other reasons to be worried. The country’s new anti-graft law, popularly known as the Kim Young-ran Act, took effect at the end of September 2016 and has had a marked effect on the luxury goods market.

In an effort to stamp out corruption, this new law bars public servants, government officials and others from accepting gifts worth more than $45 and is being seriously enforced. Members of the fashion community are becoming increasingly concerned because some brands — both local and international — have become reliant on luxury gift-giving for a significant proportion of their profits.

“I do think that the decrease of Chinese tourists is the main reason for the decline in sales we are seeing, but the anti-graft law has also had a huge impact on Korean society, which conventionally gives and takes gifts,” says Kang of Elle. “I’ve heard a PR person from one of the big French luxury house saying that some of the low-priced products like ties and scarves are still selling well but high-priced bags are selling very little.”

Bom Lee, the editor-in-chief of Dazed Digital Korea goes one step further, insisting that this new law bears the most responsibility for the recent drop in sales in Seoul. “The Kim Young-ran law has caused at least 50 percent of the problem,” he says. “Thaad, the presidential impeachment and tension with North Korea are responsible for the other 50 percent. But I hope that the sensitive issue with Thaad will fade as soon as possible.”

The anti-corruption law has certainly come at a sensitive time, while the presidential scandal makes the likelihood of it being repealed very slim. Members of the fashion industry are still pinning their hopes for a return to normalcy on the upcoming election that will lead to a recovery in sales.  But this relies on the assumption that the political and diplomatic events that provoked the crisis are temporary in nature and can be solved with the arrival of a new president in May. And that the underlying economy is in good shape — as assertion which some economists dispute.

“Well, we have a lot Chinese buyers coming to Seoul Fashion Week now and they are confident that their customers will continue buying Korean fashion because a new president will solve the Thaad dispute,” says Jung. “But maybe this incident has taught us an important lesson that in future years we need to be more prepared for these types of event, and not be so reliant on China ever again.”