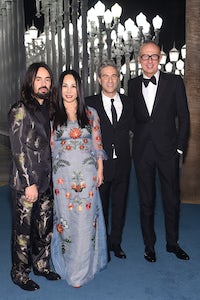 LOS ANGELES, United States — Back in 2012, when the Los Angeles County Museum of Art (LACMA) honoured Stanley Kubrick and Ed Ruscha at its second annual Art + Film Gala, there was an unplanned, if not unwelcome, turn of events. During the course of the evening, museum trustee (and former Yahoo! chief executive) Terry Semel stood up to address the audience. But he soon relinquished the microphone to Jack Nicholson, who starred in the seminal Kubrick film The Shining. Nicholson’s impromptu speech was followed by another from Matthew Modine, whose career was made by the Kubrick classic Full Metal Jacket.

For attendees, it is unscripted moments like these that make LACMA’s Art + Film Gala unique. Unlike LA’s big awards shows, the event isn’t televised or instantly covered online. The crowd that night in 2012, composed of a who’s who in film, fashion and art — from co-chair Leonardo DiCaprio to Hedi Slimane to John Baldessari — could feel at ease with the intimacy of the event, which allows for the unexpected to occur.

This year’s Art + Film Gala, which will take place on Saturday, October 29, on the LACMA campus, honours artist Robert Irwin and director Kathryn Bigelow. Four years after Nicholson grabbed hold of the mic — and five years after the first iteration — the annual event has managed to maintain that exclusive, private party feeling, all the while emerging as a major happening on both the benefit and cultural circuit.

Indeed, while the Met Gala — the annual fundraiser benefitting the Metropolitan Museum of Art and organised by Condé Nast artistic director and Vogue editor-in-chief Anna Wintour — was long ago dubbed “the Oscars of fashion,” LACMA’s Art + Film Gala has been called “the Met Ball of the West.”

Co-chair and organiser Eva Chow, whose fashion, art and entertainment connections have The New York Times calling her “the culture queen of Los Angeles,” has created something that stands apart in a city studded with red carpets. “We are doing our own thing,” says Chow, who is married to restaurateur Michael Chow of the Mr. Chow group of restaurants. “It’s very personal… I think having the synergy of art, film and fashion creates an interesting energy.”

It’s very personal. I think having the synergy of art, film and fashion creates an interesting energy.

The event, which raised over $4 million in 2015, also spotlights Los Angeles’ status as a global centre of culture. Indeed, it’s the way in which Chow — in partnership with LACMA chief executive and Wallis Annenberg director Michael Govan, who joined the museum from the Dia Art Foundation in 2006 — has managed to pull in elements from the fashion, art and film worlds, while elevating all three mediums, that has made the event so unique.

“Spending so much of my life in New York, I had this romantic idea about LA as a creative capital, since there were so many artists and filmmakers and musicians living there,” says Govan, whose connections to the fashion world also run deep. (He is married to Katherine Ross, a brand consultant who previously held positions at Prada and LVMH.) “I was so naive; I thought everyone hangs out together and knows each other. I soon realised that while there is an artistic community, it’s not as if the art world and film world are mixed.”

Govan recruited Chow, a LACMA trustee, early on to engineer the concept for the gala, which would benefit the museum’s then-struggling film department. Chow turned to her friend DiCaprio to lend the event some serious entertainment-industry weight. “I thought we needed someone from film that could represent Hollywood,” she says. “Leo is so into art and he supports art. Fortunately, for me, he said yes.”

The fashion element is most pronounced in the form of sponsorship from Gucci, which has a long history of supporting both art and film. (Over the past decade, the Kering-owned luxury brand has donated millions of dollars to the Film Foundation, a nonprofit founded by director Martin Scorsese that restores and preserves films.)

Unlike some benefits, which bring on a new sponsor every season, the partnership between LACMA and Gucci is ongoing. “I’m not sure Gucci will do this forever, but I’m a big believer in longer-term relationships with donors and sponsors,” Govan says. According to industry sources, the cost of sponsorships such as these typically start at $1 million and can be as much as $4 million, plus additional production expenses.

For Gucci, the benefit is not only the association with the art and entertainment world’s elite, but the opportunity to own the red carpet for one evening. Unlike at an awards show, where the Italian luxury label may only be worn by one or two major celebrities, nearly every person destined to appear on a celebrity style blog arrives at the Art + Film Gala in Gucci. In 2015, creative director Alessandro Michele designed dresses for Chloë Sevigny, Dakota Johnson, Salma Hayek, Gwyneth Paltrow, Rosie Huntington-Whiteley and Saoirse Ronan, among several others.

Last year’s gala was the first for Michele, who took over from Frida Giannini in January 2015. And while he made an indelible mark on the brand from the very beginning, this event allowed him to show his red-carpet range, from Hayek’s bustier gown to Paltrow’s ruffled-and-sequinned mini.

It’s not limited to celebrities. There’s such a mix of culturally significant people, and a comfort level because you’re among your peers.

“I love eveningwear and its codes, and I am also fascinated by the glam world and haute couture. Designing red carpet dresses is for me an excellent excuse to create one-of-a-kind dresses,” says Michele. “I enjoy reworking my codes in order to dress the character of that woman.”

To be sure, the women — and men — who attend the gala have been hand-picked by Chow in order to create the sort of setting that allows for those Jack Nicholson-on-the-mic-type moments. “Eva has very specific tastes in terms of hospitality,” says Keith Baptista, whose company, Prodject, produces the event. “She wanted it to feel more like a home than a gala.”

That sentiment can be felt in the intimate seating arrangement and entertainment. This year’s musical guest has yet to be revealed, although past performers have included T Bone Burnett, Culture Club and Stevie Wonder. But Baptista underscores, once again, that the carefully curated crowd is the secret to the Art + Film Gala’s success. “The audience is a key factor,” he says. “It’s not limited to celebrities. There’s such a mix of culturally significant people, and a comfort level because you’re among your peers.”

“The people behind it make it fun and interesting,” says London-based stylist and Vanity Fair contributing editor Elizabeth Saltzman, who both attends the event and styles clients for it. “It sparks proper excitement when you think about the mix of talent in the room.”

“What Eva and I talked about from the very beginning was that it wouldn’t be about the fancy decor and spectacle as much as it would be about the people,” Govan adds. “We’re not going to make this a thousand person event. We’ll sacrifice the upside of dollars for intimacy.”

Of course, tickets to the event are not free. This year, prices started at $5,000 for an individual ticket and reached $100,000 for a top table.

But the price of admission appears to be worth it, not only for the attendees but for Gucci, which has managed to use the event as a branding platform, embedding itself further at the growing intersection of art, fashion and film. Last year, the company generated an estimated 615 million media impressions in the US alone from the coverage.

“A tiny little detail that I love is that we’ve skipped the traditional, logo-ed step-and-repeat,” Govan says. Instead, media photos are taken in front of Chris Burden’s “Urban Light,” an outdoor installation made up of 202 vintage lamp posts. “It’s not emphasising the commercial brand name, but gives the whole enterprise a sense of place.”

But as the Art + Film Gala grows in notoriety, Govan and Chow will have to work hard to ensure that sense of place remains. “Like anything else, it can be hard to contain for many years,” Saltzman says. But for now, “There are so few moments in life where it’s a complete and utter joy to be a part of a night that is a big public fundraiser. You really feel fortunate to be asked.”