NEW YORK, United States — “Let’s sit on the soft seating,” says Laura Brown, guiding us toward a couch in what used to be a more traditionally furnished conference room at Time Inc.’s still-fresh headquarters in Manhattan’s Battery Park City.

A standard office-style conference table is installed at the front of the room, but the newly minted editor-in-chief of InStyle requested living room-style furniture — a couch, comfy chairs, a low-to-the-ground coffee table — for the back. It’s more in line with the casual air she cultivated in her 11 years at Harper’s Bazaar, where she most recently served as features/special projects and executive director.

The "soft seating" also reflects the changes Brown is implementing in her new post at InStyle, whose long-time editor Ariel Foxman departed at the beginning of August 2016. While it would be unfair to call Foxman — who ran the celebrity-style bible for eight years to much acclaim — reserved, his was a quiet approach. The adjective Brown repeatedly uses to describe her plans for InStyle is “bold.”

“For me, as an outsider, I looked at the name: ‘In’ and ‘Style.' It has the two most powerful words in fashion,” she says. “That is the most important thing for me to reinforce. To know that if you are on the cover, if you buy an ad, if you attend one of our parties, if you’re in a story, if you made a shoe that we’re featuring, you’re in style.”

There are few editors as well suited for the InStyle job as Brown, whose easy rapport with Hollywood celebrities, art-world doyennes and name-brand designers alike helped her to become one of the top “wranglers” in the business.

At Bazaar, she was known for arranging shoots that offered high-voltage glamour and wacky fantasy at once: Rihanna posed in the mouth of a shark (in honour of the 40th anniversary of Jaws); Cindy Sherman dressed up as a street-style star; a bathing-suit-clad Gwyneth Paltrow shopping for groceries in Brooklyn.

She has also emerged as a personality in her own right, with more than 106,000 Instagram followers who seem, at least from their comments, to appreciate the Australian-born editor’s humour-laden take on fashion and celebrity.

“I will wear this @maisonvalentino until they pry it from my cold, dead hands,” she recently quipped underneath a photo from a friend’s wedding. “Sometimes a chick just really feels @dolcegabbana in the bathroom,” reads the caption of an image taken at a recent appearance at Fortune’s Most Powerful Women Summit.

Like many ambitious editors before her, Brown has also crafted an on-screen persona, channelling her sunny-with-a-bite disposition as the host of the talk show “In and Out of Fashion” on Made to Measure (M2M), IMG’s fashion video network. 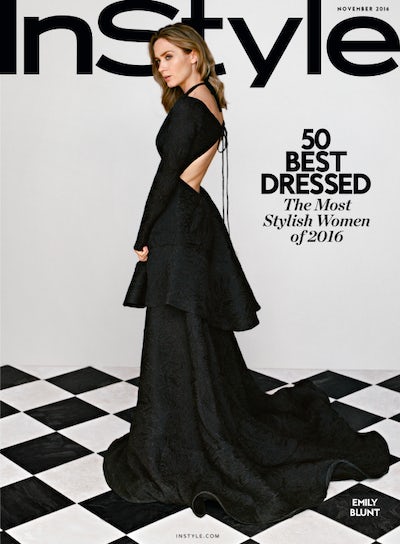 Her plan is to insert a similarly playful sense into the pages of InStyle. The shift in direction can already be felt on the cover of the magazine's November issue, which features “Girl on the Train” star Emily Blunt against a bubble-gum pink background. It stands in stark contrast to October's Michelle Obama cover, which was shot in natural light.

However, Brown is unsure it’s a fair comparison. “Really, you think? I got here in enough time to put Rosie Assoulin on the subscription cover,” she says. “I was skittering in, writing my editor’s letter, and then I was out [for the Spring/Summer fashion shows].”

Brown says her impact on the November issue was limited to the subscribers' cover and her transformation of the magazine's coverage of the Toronto Film Festival. InStyle hosts a party there, but instead of giving it just a couple of pages in the front of book, she expanded the feature — which includes portraits of Lily Rose Depp, Nicole Kidman and Naomi Watts — to eight pages in the well.

But Brown aims to update the magazine in more profound ways. “Going forward, in terms of design, it will be refreshed,” she says. “It needs to be somewhat bolder in terms of readability.” These changes will come next year. “If we were going to put the magazine in restaurant language, February will be the soft opening and March will be the full buffet,” she jokes.

Indeed, the March 2017 issue will be Brown’s official coming-out party. It will also mark the debut of “StyleIn,” a mini-magazine inserted into the main book that will presumably target a more youthful audience. “You get the social model who may not be right for newsstand cover but has great currency, great taste, great voice,” she says.

In the meantime, Brown plans to bring more faces and personalities to the pages of InStyle, which has traditionally focused on product. The magazine's opening service section, which has typically led with an image of a model with her head cut off in order to emphasize the clothes, will now star some sort of It-girl, whether that means a performer or an influencer.

“If you give the model a head, maybe you get a better model,” she says. “And if you get a better model, then maybe you get a young singer, or actress, or somebody with a social footprint who is delighted to get four pages in InStyle, showing off clothes that women want to buy, that we then do a whole social campaign with a video … So then I’m using those pages and getting more out of them than what was already there.”

Brown also plans to add more words to the magazine. “My idea of style comes in a lot of permutations. I’m not just like, ‘Here are the new trousers,’” she says. “We’ll have that, we’ll have plenty of lovely trousers! But it comes through a pop-culture lens. Mixing people up and telling original stories that are entertaining as well as providing all of the service.”

While InStyle has long had the feeling of a "magalog" in the vein of the now-shuttered Lucky, the magazine has beefed up its features in the past few years, in part, thanks to the 2013 arrival of fashion news director Eric Wilson, whose reportage and criticism in the Styles section of The New York Times earned him an ardent following.

It's all part of a broader bid to increase the value of the print product. While newsy party pages and fashion “how-tos” have long been InStyle’s bread-and-butter, that sort of information is now better consumed online. In-depth, special features could make the magazine stand out from what's already abundant on the Internet.

Brown seems eager to amplify Wilson’s voice in particular, adding a designer profile to every issue. “I would read Eric’s column, and he would get great interviews. I would look at it and think, ‘Well, you could have done more with that!’” she says. “You’ve got Stella McCartney on the phone, you’ve got Nicolas Ghesquière on the phone. They talk to you because they respect you and they respect the magazine. Why can’t we take something that we already have and do it really, really well and make it grander and bolder and more effective?”

But there will also be a new mix of voices in the magazine, from celebrity guest writers to emerging photographers.

To be sure, Brown has her work cut out for her. Along with the general malaise facing print publishing — newsstand sales are down across the board, while advertisers are moving their spend not only from print to digital, but from legacy brands to new upstarts — InStyle faces its own set of challenges.

For one, publishers have come and gone since the departure of Connie Anne Phillips in 2013, where she managed to pull off 14 straight months of ad-page growth in a difficult market. (Phillips left Time Inc. for Condé Nast’s Glamour, where she is currently the publisher and chief revenue officer of that title, as well as Self.)

In August, industry veteran Kevin Martinez was named vice president, group sales director of InStyle and StyleWatch. In a company-wide restructuring earlier in the summer, Time Inc. did away with publisher positions at individual titles, dividing the company into four groups, each with its own business lead: celebrity, entertainment and style; news and luxury; lifestyle; and sports.

The editorial structure has changed as well. While Foxman oversaw both InStyle and StyleWatch — whose editor-in-chief, Lisa Arbetter, reported into him — Brown and Arbetter now both report to Jess Cagle, the former Entertainment Weekly editor who now oversees all three titles, as well as People.

In some ways, the new reporting structure is better for Brown, as it allows her to focus on one title, an increasingly rare privilege as “sharing resources” becomes standard practice at cash-strapped publishers.

But it also likely means she will be expected to act fast, especially when it comes to digital, where InStyle has long lagged behind its competitors. In August 2016, InStyle.com drew 6.9 million unique visitors, up 102 percent from August 2015. That same month, Elle.com attracted 8.4 million unique visitors, while Harper’s Bazaar — a significantly smaller title in terms of circulation — attracted 6.8 million.

Just three weeks into the job, Brown hired digital native Ruthie Friedlander — a long-time deputy editor at Elle.com — to overhaul the InStyle website, with an emphasis on video and features. Brown will also collaborate with the InStyle UK team more frequently than her predecessor, given that it will be shuttering its print edition in December and launching as a digital-first brand come January 2017. The goal is to create what is essentially a 24-hour stream of content. "InStyle UK's transition to digital only is a huge opportunity for the brand online," Brown says. "We will be working closely with [the team]  to generate and share original content, especially on news. We'll just have to manage 'color' versus 'colour'."

Brand extensions — an arena in which InStyle has long played hard — will also be amplified. On Monday, October 24, Brown will co-host the second-annual InStyle Awards, pegged to its “50 Best Dressed Women in Hollywood” franchise, which is edited by Wilson. “People turn up for this magazine and I just want to engage them in more and different ways,” she says. “This is a massive, behemoth of a magazine. It’s an incredibly powerful brand. It’s a dominant force in this business. It has an amazing spine, I’m just bringing up the jazz hands a little bit.”

But the question remains: why did Brown, whose talents reach far beyond the printed page, want to solve a problem like InStyle?

To be fair, it’s not as if Foxman left the title in shambles. According to stats pulled from consumer research firm GfK MRI, the brand has a loyal following, with readers purchasing an average seven items solely from the advertisements, more than any competitor. What’s more, of any major American magazine, InStyle has the highest number of readers with an annual household income of more than $100,000. Its readers also have the highest median household income: $83,554.

But the high-income numbers also reflect an aging readership. As younger generations turn away from print, what keeps Brown — whose social-media savvy feels more instinctual than tactical — interested? She could easily run away to Hollywood and become a content creator of a different sort.