We're wrapping up BoF India Fashion Week with the wonderful story of Shilpa Chavan, a Bombay milliner whose sophisticated urban headdresses have caught the attention of Style.com and ended up at the AlSabah Art & Design Gallery in Kuwait.


MUMBAI, India — There's no doubt that India is a treasure chest of craft and creativity. Indeed, these were the two words most heard at the recently concluded IHT conference in New Delhi, after the two words in the program title: "Sustainable Luxury".

While the images conjured up by the word craft are often of weavers in villages or hand embroiderers in factories, to prove that contemporary craft is alive and kicking in urban India, meet Shilpa Chavan—the maverick milliner of Mumbai and proprietor of littleshilpa, her nickname and brand.

Littleshilpa is a case in point of incredible Indian creativity in need of a bit of strategic guidance and fashion business savvy. But in the subcontinent's burgeoning fashion industry, executives with grounded commercial experience are few and far between. And so the question becomes, how does India commercialise its craft and creativity?

For Shilpa, all the creative pre-requisites appear to be in place. She is a trained milliner, shifting between various roles as a costume stylist, jewellery designer and installation artist. There's a high level of integrity in her designs, inspired by a simple nostalgia for Mumbai, which translates into what she calls, "a revivalism of sorts." Thanks to her fascination with archaic knick-knacks and the Mumbai bazaars where she finds them, she tends to focus on one form intensely, starting with something very ordinary or humble—an old military badge, a bangle, or rubber flip flops worn by India's everyman.

"It's got less to do with being Indian," she says, "than it is about looking at shapes and objects differently. When I find a shape, be it a rubber slipper or a paper kite, the first thing I think of is how it could be worn on the head. Then I think downwards into jewellery and other accessories like badges, belts...but it really starts with the shape."

Using a gifted natural eye refined at Central Saint Martins and trained under British milliner Philip Treacy, Shilpa has single-handedly revived India's history of headgear for urban women to wear. And so long as she's commissioned to use her own hands—"I hate depending on tailors and stuff"— to create something crafty to wear, she says she's happy.

But for how long?

The big questions on her mind these days are ones of positioning and commercial viability. "Because of the recession some people advise me to stick to what I'm doing instead of investing in something that's mass. I tend to believe this. I think we've over killed the brand thing and now luxury will return to what it used to be—having that one special piece, being design-oriented and having more respect for the story." 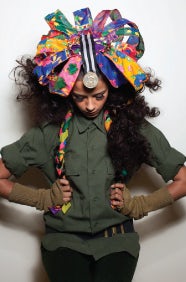 In March, Shilpa showed at Lakmé India Fashion Week (LFW), showcasing her Battle Royale collection which focused on taking "obsolete luxury" and putting it in a "modern context". Buyers from Villa Moda picked up a few pieces. But a funny thing happened to the shipment en route to Kuwait. What was originally bought for a commercial fashion purpose was rerouted to an art gallery by the common owner, Sheikh Majed Al-Sabah. The concept store I Love Souk, part of the AlSabah Art & Design Gallery in Kuwait, sold her work as fashion-art instead.

An unplanned move, "but now", she says, "I know that's the middle space I want to inhabit—an artist and a designer who makes commercial pieces once in a while. I don't want to bring out a collection every season purely for retail. I mean, I can't, even if I wanted to." This is a model that seems to have worked with Contemporary artists like Murakami, who has collaborated more than once on commercial products with Louis Vuitton, while still maintaining a presence in the art world.

The same could prove to be true for Shilpa. In the past few years Shilpa's creations have organically found their way into an art exhibition in Lille, France and the India Now season at the Victoria & Albert Museum in London. And commercially, her pieces are sold at Barcelona's Drap-Art gallery, My Sugar Land (a fashion concept store in London focused on emerging designers), as well as her own boutique in Goa called National Permit.

A mixed bag for sure. But maybe that's not a bad thing in such a world as we are in now. The future of such made-by-hand, made-in-India product, which hangs somewhere between installation art and collector's fashion item indicates the need for a special place, free from the constraints of commercial enterprise, and this duality of commercial and artistic activity allows for that.

But, when it comes to developing and executing such a strategy, fashion designers from emerging markets should not settle for learning by luck and chance. Instead, they should learn from those who have already forged such a path, and stuck to it. Manish Arora, a homegrown Indian fashion designer, is a good place to start.

If she can find a way to put local craft into a global strategy as Arora has done, she will find herself in as good a place as he is. Maybe not rich, but happy, clear-minded, busy and 100 percent prime for investment. No doubt, like Manish, Shilpa will be praised for her boundless creativity wherever she goes. But long-term success will require more than critical acclaim.

Sita Wadhwani is a writer, fashion stylist and trend scout based between New Delhi and Mumbai.