PARIS, France — Graphic designer Vahram Muratyan is pitting the world's fashion capitals against each other in his new collaboration with Longchamp.

Muratyan — who is best known for his “Paris Versus New York” project and has previously worked with the likes of Prada, Smythson and Dior — has given the brand's classic Le Pliage a graphic spin by stamping Paris, London or New York on the bag, somewhat disguised in an origami-like font.

“During the creative process I was on my way to Tokyo,” Murtyan tells BoF of his inspiration for the line. “Le Pliage means folding and draws some of its playfulness from the art of origami. I started to draw creased squares and design letters this way. I decided to create a full alphabet, a new special font for Longchamp; my wish was to look at the bags and find the words Paris, London or New York, but not right away. I certainly wanted to exit the ‘tourist-souvenir bag’ area.” 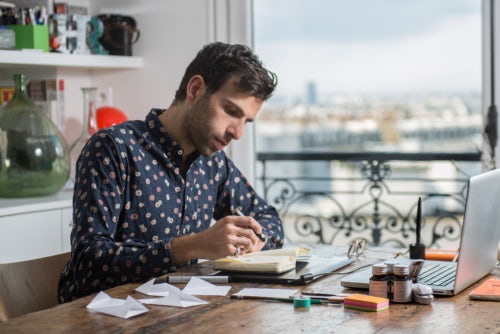 “I’ve known and followed Vahram’s work for a while now,” Sophie Delafontaine, artistic director at Longchamp, tells BoF. “My brother Jean [Cassegrain, Longchamp chief executive] and I have always admired his work for its colourful aesthetic, bold lines and clever play on words. We thought Vahram could bring a fresh eye to our already widely popular collection.”

Longchamp is no stranger to collaborations; in the past the brand has worked with a diverse range of talents including Tracy Emin, Kate Moss, Mary Katranzou and Jeremy Scott. “Each new collaboration pushes Longchamp forward,” Delafontaine explains. “Doing these capsules, we love to open our doors to creatives who approach our bags in a new way, present new technical challenges, and enlarge our point of view.”

The family-owned Parisian house, which will celebrate its 70th anniversary next year, is in the midst of an aggressive global expansion strategy: this year has seen the house open flagships in Moscow and Shanghai, with a Tokyo flagship is set to open this autumn and a new Fifth Avenue, New York flagship planned for 2018.