Louis Vuitton and the Business of Globe-Trotting Cruise Collections

BoF sits down with chief executive Michael Burke and artistic director Nicolas Ghesquière to understand the thinking behind Louis Vuitton’s push into the ready-to-wear market.

MONTE CARLO, Monaco — So much for a bit of intra-fashion week respite. For some members of the fashion flock, the past few weeks have been a glamorous blur of large-scale international events, targeting a global audience and staged outside the physical and temporal confines of the jam-packed, official fashion weeks which take place one after another in the main fashion capitals every September and February.

In recent weeks, rival haute couture houses Chanel and Dior presented their cruise collections in Dubai and New York, respectively. Pre-collections, like cruise, hit the shop floor before the main Autumn/Winter and Spring/Summer seasons and account for up to 70 percent of a brand's ready-to-wear business.

While Dior’s show in Brooklyn was a more intimate affair, the Chanel event was reportedly on a scale previously unseen in the fashion world, staged in an elaborately constructed venue in the middle of the Dubai desert with over 1,000 invited guests. Having pioneered the concept of the traveling fashion show with events in places like Moscow, Venice, Scotland and Dallas, it was Chanel that kicked off a new trend to show pre-collections in a big way.

On Saturday evening, luxury behemoth Louis Vuitton joined the fray, making its first salvo into this new business of globe-trotting fashion events pegged to pre-collections, showing the first cruise collection under artistic director Nicolas Ghesquière in the square just outside the Palais Princier Monaco, the official residence of Prince Albert II of Monaco. (In 1997, his family, the Grimaldis, celebrated 700 years of rule from this same palace). 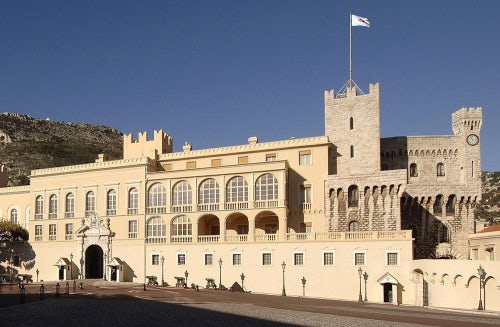 But why is Louis Vuitton, a house where leather goods and accessories reportedly make up around 80 percent of turnover, expanding its emphasis on ready-to-wear?

“It’s [already] bigger than most people think,” says Michael Burke, chief executive officer of Louis Vuitton, when I pose this question before the show, on the terrace of a 6th floor suite at the Hotel Hermitage, overlooking the Monaco harbour, with a clear view of the royal palace where the show would be presented a few hours later. “Vuitton’s ready-to-wear business is bigger than all but a handful of other ready-to-wear houses.”

Last year, the entire Louis Vuitton business is estimated to have generated almost $10 billion in revenues, according to Forbes. If the ready-to-wear business was assumed to be only 5 percent of this, it would already be worth about $500 million in annual revenue. Still, as a percentage of the total Louis Vuitton business, leather goods and accessories remain the key business drivers.

“Our client doesn’t care about percentages,” counters Burke when I push him for further clarification. But is this about brand communications, or is it really about selling clothes?

“You can take famous ready-to-wear houses and world-famous couture houses and we sell a lot more, and we dress many, many more women than the great majority of them. But yes, the fact is, we are the most successful accessories house, by far. So, what we’re doing here today is not about a business model,” he continues. “It’s about talking to women and making them desire to look good and [look] to Louis Vuitton to do that.”

“Vuitton has been very successful at doing that with Marc [Jacobs]; much more successful than most people realise,” he continues. “Fifteen years ago, we didn’t sell a stitch of ready-to-wear. Nobody believed that Vuitton should or could be a force in ready-to-wear. Marc has answered that question for us. It’s just that the shows were such spectacles that maybe the spectacle overshadowed the relevance of the business as a business model. It’s selling short what Vuitton has done over the last 15 years — the studio, the ateliers, the petites-mains — the entire microcosm that has blossomed at Vuitton to be a major force in ready-to-wear.”

Indeed, Burke believes this could now be a new growth vector for Vuitton as it looks to find its feet in the post-Marc Jacobs era, and diversify a business largely dependent on leather goods. “There’s a tremendous potential, in both men’s and women’s. It’s a question of balance, and perception,” he says.

According to Burke, nowadays cruise is not a larger part of the ready-to-wear business just because it stays on the shop floor for longer, but also because most of the market growth is coming from clients in warmer climates: the Middle East, Brazil, South East Asia and South America. “Twenty years ago, most of our clients came from cold climates. Today, most of them come from warm climates. The South has risen. It is a very powerful moment on the fashion calendar.”

When 350 invited guests gathered a few hours later at the custom constructed show venue — a transparent cube, where curvilinear re-edition sofas from designer Pierre Paulin meandered their way through the venue so everyone had a front row seat — Vuitton seized the moment.

Like Mr Ghesquière’s first show in Paris, there were no pyrotechnics or production spectacles here. The focus was resolutely on the clothes. And, as scores of global celebrities, models and bloggers arrived to take their seats — including pint-sized Russian media maven Miroslava Duma of Buro 24/7, Chinese actress Zhang Ziyi and, of course, Princess Charlene of Monaco, a former Olympic swimmer — each one was decked head-to-toe in Louis Vuitton. It seemed to be Mr Ghesquiere’s way of saying that these were his girls: glamorous, global women, with large budgets and a wide range of personal styles and physiques. 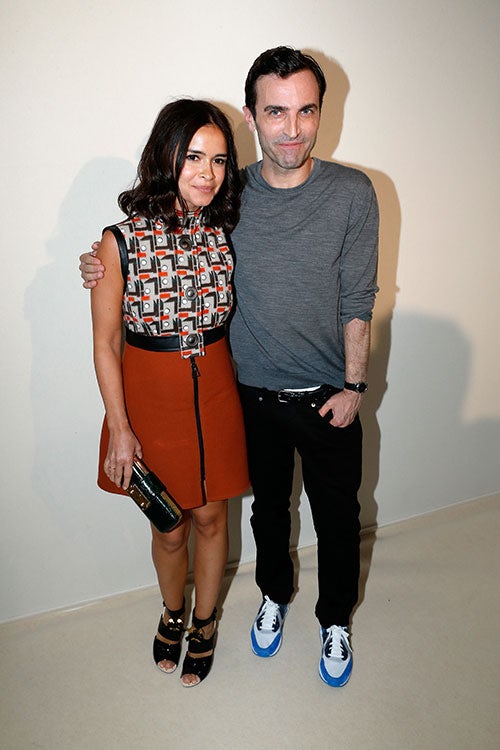 For Cruise 2015, he drew upon the same 1970s a-line silhouette from Autumn/Winter, layering on encrusted embellishments and bold prints. These were so perfectly executed that they did not look at all blingy. The strongest new looks were in fine layers of knitwear or lacework, and sleek, elongated trouser suits. Ghesquière continued his development of desirable accessories, including strappy, gladiator sandals and reworked Petite Malle box clutches.

After the show, Ghesquière took hushed appointments with a few journalists, all queued up in an ante-chamber, before being taken to meet with him in a private room just off the courtyard of the Royal Palace.

“What is cruise?” he asks. “Yes, it’s summer clothes for people who travel in the winter, but it’s also some clothes that are delivered in November to the stores, so this duality between summer clothes and winter clothes is quite interesting,” Mr Ghesquière says. “[It’s] giving you the possibility to mix all of those things.”

“It’s more modern to me, and more contemporary, to think that this is a functional wardrobe and you wear it,” he says. “Even if [the pieces] are luxurious, you should feel that you can grab them and wear them with a certain easiness. That’s my intention for Vuitton.”

“Showing a cruise collection is also clearly a message of saying ready-to-wear is important, and it has to be at Vuitton,” he added a bit later. It’s a departure from his more daring, futuristic designs at Balenciaga and a sign that, like Mr Burke, Ghesquière too sees a substantial opportunity in ready-to-wear. “I think I’m very happy with what I did, but what is exciting now is to speak to a broader audience of women and see what is going to be the response.”

But let there be no doubt, this show wasn’t just about pushing ready-to-wear. It was an event staged to show off the magic and muscle of the world’s largest global luxury brand, streamed to a global audience of digital consumers with its own dedicated hashtag: #LVCruise.

Prior to the trio of cruise collection events from Dior, Chanel and Vuitton, Burberry and Michael Kors also staged massive, global events of their own in Shanghai, inviting VIP customers, A-list celebrities and international media to immerse themselves in the brands’ DNA. These were not just ordinary fashion shows. At the Michael Kors event, chief executive John Idol told me it was the largest event the company had organised anywhere in the world. But Mr Burke says the Vuitton event is something different altogether. “I would accept ‘global’ for this event, but I wouldn’t call it ‘massive.’ Quite to the contrary.”

“It’s exciting! Things are happening. It’s just confirming what we all know has happened over the past five to ten years — that fashion has become a sociological force. This would not be happening if this weren’t true,” he concludes. “It’s a manifestation of that, of fashion being important. It’s not frivolous. It’s about much more than just clothes.”

And like the other events, the opportunity to do things outside the crowded fashion week schedule is definitely appealing. “That’s trade,” he says when asked to compare the cruise shows with the regular fashion weeks. “They’re trade events as they should be, and trade events are not particularly geared towards clients — the final client,” pointing out that the majority of attendees at Vuitton’s cruise event were top-tier clients, some of whom spend more than $1 million a year with the brand.

“I like to think of Vuitton as leader in many things,” says Burke, reflecting on the new chapter that is now unfolding for the brand. “It’s been a leader in retail development, in opening up countries [to luxury], in bringing fashion to people all over the world, in communication, and in vertical integration of manufacturing. It’s been a leader in all of these things, and we also need to be style leaders in ready-to-wear. This is what this week is all about — the show, but it's also the Cannes [Film Festival], the windows in the store, the trunk show, and the clients who want to be the first to have it, four months before it comes into the stores.”

“There were fights last night in the store,” he says, laughing, referring to an exclusive trunk show of the Autumn/Winter 2014 collection for VIP clients held in Vuitton’s Monaco boutique. “You have personal shoppers from all over the world trying to make sure their client gets it first. I’m a retailer at heart. There is nothing that makes me happier than seeing that!”

Disclosure: LVMH, which owns Louis Vuitton, is part of a consortium of investors which has a minority stake in The Business of Fashion. Imran Amed travelled to Monte Carlo as a guest of Louis Vuitton.