LONDON, United Kingdom — When barely-there neon bikinis, sparkly fishnet miniskirts and plunging hot-red swimsuits hit TV screens, it can only mean one thing: Love Island is back. And the show’s new fashion partner, e-tailer I Saw It First, is hoping viewers will want to whip out their credit cards and buy all the looks on display.

The British reality TV show, set on the island of Mallorca, is a hit with the young viewers advertisers covet, with last summer’s edition scoring ratings among Gen-Z and Millennials that were second only to the World Cup matches. Monday’s premiere attracted over 3.7 million viewers, even higher than last year’s record-setting debut. Even the US is getting in on the action, with CBS acquiring the rights for an American version, due to air in July.

One sponsor in particular hit the jackpot last year. Missguided, which outfitted the show’s contestants for the duration of its 6-week run, saw a 40 percent sales bump compared with the eight weeks prior to when the show started airing, with some items worn by popular contestants seeing an instant 500 percent sales spike.

Now it’s I Saw It First’s turn. The brand founded by Boohoo co-founder Jalal Kamani in 2017 spent between £1 million and £2 million to secure its spot as the show’s official fashion partner, after Missguided opted not to renew its partnership, touching off a bidding war. Missguided declined to comment for this story. 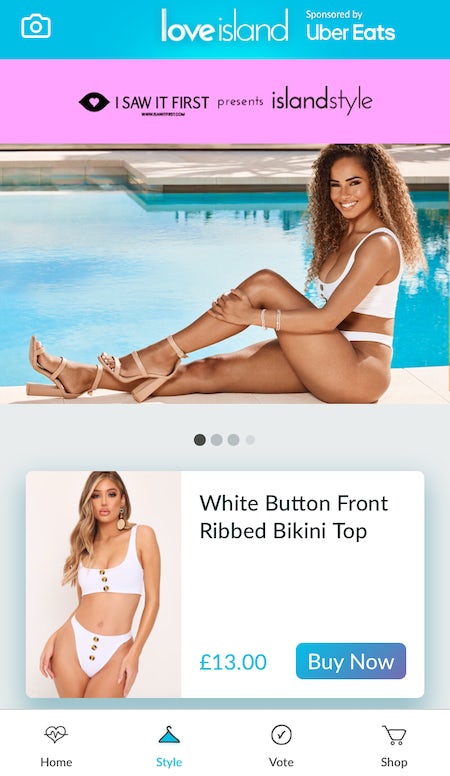 Viewers can shop looks directly from the app | Source: Courtesy

I Saw It First is effectively recreating Missguided’s 2018 campaign, outfitting female contestants and offering viewers an opportunity to buy the same clothes via the same app they use to vote for who they want to save from being dumped from the island. I Saw It First went a step further, building a dedicated Love Island fashion website, which will make it easy for shoppers to find the clothes they see on screen.

But there’s no guarantee of striking gold twice.

The landscape of digitally native, super-fast fashion brands is becoming more and more crowded. In the UK, a swarm of younger labels are competing with larger names like ASOS, Boohoo and Missguided, which enjoy greater brand recognition and bigger marketing budgets.

On Monday, I Saw It First provided contestants’ outfits in their introductory segments, though many were still wearing their own clothes (including a bikini from rival Asos) when they arrived on set. The sponsor ran a few ads during commercial breaks, as did other fast fashion retailers, including Boohoo-owned Pretty Little Thing and H&M.

Swapping TV ads for a more integrated TV sponsorship deal is one way for I Saw It First, which launched in 2017, to stand out from the pack. Being the sole fashion partner for the reality TV show was one of the biggest attractions for the brand, said Steve Crawley, director of Media Agency Group, the planning and buying agency that brokered the deal between I Saw It First and Love Island.

“It’s very saturated for something to be different and to really stand out,” said Crawley. “If you’re trying to advertise against the Boohoos of this world, to run a TV advertising campaign for example, to try and compete with the spend levels is impossible.”

Missguided and I Saw It First aren’t the only e-commerce brands turning to hit reality TV shows hoping for a marketing and sales boost. Last October, Quiz Clothing teamed up with popular ITV show The Only Way is Essex, with cast members curating a party edit that was worn during an episode. More recently, Never Fully Dressed signed on as Channel 4 show Made In Chelsea’s official fashion partner, with select cast members showcasing the brand’s wares and shoppable ads running on its On-Demand platforms.

What sets Love Island’s fashion partnership offering apart from the rest is integrating e-commerce directly into the viewing experience via the show’s official app.

“The partnership taps into the ever-evolving way young people are now shopping for fashion,” said Samanta Dover, senior retail analyst at Mintel. “When they are watching TV, they are also highly likely to be on their smartphone. The in-app purchasing functionality is instrumental to the success of the Love Island fashion partnerships.”

The partnership taps into the ever-evolving way young people are now shopping for fashion.

The potential high-reward of being Love Island's fashion partner doesn’t come without risk. Recently, the show has come under scrutiny following the suicides of former contestants Sophie Gradon and Mike Thallasitis. Afterward, ITV promised to provide Islanders with mental health support, as well as social media and financial management training. The show has also faced criticism for its lack of diversity among contestants.

This year’s 90 minute season premier was peppered with ads and products from partners, including meal-delivery service Uber Eats, which secured its spot as the primary sponsor for a reported £5 million. The show even has an official suncream partner.

Love Island has also been focused on building out its own brand. In addition to its signature water bottles beloved by Islanders, it’s also flogging suitcases, sunglasses and a beauty line, LoveBurst, to boot.

I Saw It First, which lacks Uber’s name recognition, will have to work harder for viewer attention. Plus, as the show becomes more commercialised, all sponsors run the risk of inciting fatigue.

“Desensitisation to sponsored content leads to the risk of consumers switching off,” said Hannah Ryan, head of insight and relations at London-based influencer marketing firm The Goat Agency. “A consumer doesn’t want to be hit too many times by the same product or message, and there’s a fine line between what is enough and what is too much.”

“If you go into most offices, most universities, most circles of friends, Love Island is generally one of the topics of conversation [during the six-week air time],” he said. “Whether or not the brand has been mentioned, there is still that association with Love Island.”

Love Island know their audience inside out. They’ve done it before, I’ve no doubt that it will work again.

Beyond a short-term sales bump, brands that partner with a show like Love Island are also building relationships with the next wave of celebrity influencers, in some cases, from the very start of their careers. According to Mintel, one in 10 fashion consumers in the UK look to reality TV stars for fashion inspiration, a figure that rises to one in four among those aged 16 to 24.

Certainly, islanders choosing which I Saw It First clothes they want to wear and styling it in with their own wardrobe adds a deeper level of authenticity to the partnership, giving the fashion partner the potential to make more of a splash than Superdrug-provided sunscreen or Lucozade Zero fizzy drinks.

“Really at the heart of it, it’s about making sure that the campaigns, the products, and the people that are promoting these products, are relevant,” said marketing consultant and creative strategist Emma Rees. “Love Island know their audience inside out. They’ve done it before, I’ve no doubt that it will work again.”