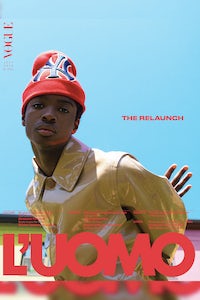 MILAN, Italy — Condé Nast Italia is relaunching L’Uomo Vogue just in time for its fiftieth anniversary, about a year after closing the menswear magazine and other specialty Italian titles.

The new incarnation of L’Uomo Vogue will publish twice in 2018, in June and October, and will be available on newsstands and initially bundled with Vogue Italia subscriptions. It will also be available in English throughout with Italian translations.

“We didn’t want to wait too long [to relaunch] because, at the moment, the memory of L’Uomo Vogue is quite strong in the market with clients and readers,” Vogue Italia editor-in-chief Emanuele Farneti told BoF. He said it was always his hope to bring back the title, but last year he focused on rethinking Vogue Italia.

Farneti took over the magazine in January 2017 following the death of legendary editor-in-chief Franca Sozzani, who turned both Vogue Italia and L’Uomo Vogue into influential fashion tomes. When Condé Nast Italia’s Fedele Usai announced the closure of the title last year, he said the publisher needed to focus on its key brands. (Vogue Accessory, another magazine closed at the same time, relaunched in March as a sister publication to Vogue Italia and Vanity Fair Italia.)

With fewer issues per year and a smaller editorial staff, the publisher is now ready to bring L’Uomo Vogue back with the support of advertisers — the first issue has 127 advertising pages. In addition to working with outside contributors, the magazine will be lead by Farneti as editor-in-chief, GQ Italia’s fashion director Andrea Tenerani and Vogue Italia’s deputy editor-in-chief Alan Prada. Thomas Persson will serve as creative director.

“We are leveraging some opportunities within Condé Nast,” said Farneti.

Even though some L’Uomo Vogue content will live online on Vogue Italia’s website, Farneti also wants to ensure both titles will look and feel different. By publishing twice or three times per year, L’Uomo Vogue is designed to live longer on the newsstand and, unlike its previous monthly iteration, will have less news. The new L’Uomo Vogue will focus on fashion and style rather than lifestyle as well, which is covered by GQ Italia.

“There really is a possibility of being the most relevant international men’s title as long as we focus on fashion,” said Farneti. By publishing in English, he hopes the magazine will expand the international reach he says it had already cultivated.

All five aforementioned designers are profiled in the first relaunch issue, which will not explicitly celebrate the magazine’s anniversary — “this has been done many times in the past,” says Farneti — but features the work of five female photographers who were commissioned to explore five different categories of men’s style, loosely inspired by the last five decades. Collier Shorr, Brigitte Lacombe, Annemarieke van Drimmelen, Julia Hetta and Arielle Bobb-Willis contributed to the special package.

The magazine will be released on June 12, the opening day of Pitti Immagine Uomo in Florence. Farneti will celebrate with a party for 500 industry insiders at the influential men’s trade show, followed by a private dinner party celebration in Milan the following week. “We didn’t want this to be a supplement,” said Farneti, adding that the magazine will address a range of different perspectives on men’s style in a way that will hopefully feel both very Italian but also internationally accessible. “We felt like it was the right time to rethink the formula, stop for awhile and see what else the market needed and restart with a fresh mind.”