Sector results announcements have confirmed that recovery in the luxury sector is no longer a pipe dream.

The Savigny Luxury Index (“SLI”) gained 6.8 percent this month, almost double the MSCI’s gain of 3.5 percent. More positive news flow, including yet another stellar quarterly performance by Kering, prompted a mini-rally in the SLI. Voices of caution warning of currency headwinds and the potential impact of geo-political events (North Korea anyone?) have taken a backseat.

October has been a month of results surpassing all expectations. LVMH’s, Moncler’s and Kering’s were a continuation of the same success story, with the latter taking the laurels: Gucci’s 49 percent sales growth in the last quarter helping Kering to report a 28 percent growth. Recovery in Chinese consumption of leather goods and fashion underpinned LVMH’s 12 percent sales growth this quarter, whereas Moncler continued to impress investors with a 15 percent sales growth. The feel-good factor also extended to consultants Bain, who revised their 2017 industry growth forecasts upwards from 2 to 4 percent (forecast in May) to 6 percent.

The ultimate confirmation of a recovery in the sector is when the watch sector starts to bounce back. And bounce back it did: Richemont announced that it was expecting a net profit jump of 80 percent in its forthcoming first half results, driven by demand for its watches. The owner of Cartier said sales had increased by 12 percent when currency effects were stripped out compared with a year earlier. Swatch also confirmed that sales in August and September had grown by 10 percent, and that the group’s internal growth target for 2017 was 7 to 10 percent. Further demonstration of a recovery in the watch sector came with the deals announced this month: a consortium of Hong Kong-based investment funds acquired just over 30 percent of O Luxe Holdings (formerly Ming Fung Jewellery), a listed Hong Kong-based watch distributor and retailer, valuing the company at around $1 billion; whilst France-based Efficio Group, a company specialising in digital communications, acquired France’s largest second-hand luxury watch retailer Cresus.

Mergers and acquisitions activity across other segments of the luxury sector was also brisk. Belstaff was sold to British petrochemicals company Ineos as part of the Reimann family’s progressive exit from the luxury sector. China-based Hony Capital acquired a 30 percent stake in Mr & Mrs Italy, an Italian brand founded in 2007 and best known for its fur-lined parkas. The beauty segment recorded a number of transactions this month: US-based consumer fund Castanea acquired 30 percent of skincare brand Tatcha; Henkel acquired US haircare brand Zotos from Shiseido and UK-based online beauty retailer The Hut acquired make-up brand Illamasqua. Last, but by far not least, US-based private equity firm Carlyle acquired a 50 percent stake in the Millennial cult brand Supreme for a reported $500 million.

Streetwear is hot right now as evidenced by Carlyle’s investment in Supreme, on the tail of the cult New York brand’s collaboration with Louis Vuitton earlier this year. More broadly speaking there’s a big push amongst luxury brands in the casual segment, notably in footwear. This has all been to attract Millennials, and the proof seems to be in the pudding: Millennials have accounted for 85 percent of the luxury sector’s growth this year, according to Bain. Millenials and digital: two key words for luxury brands going forward. 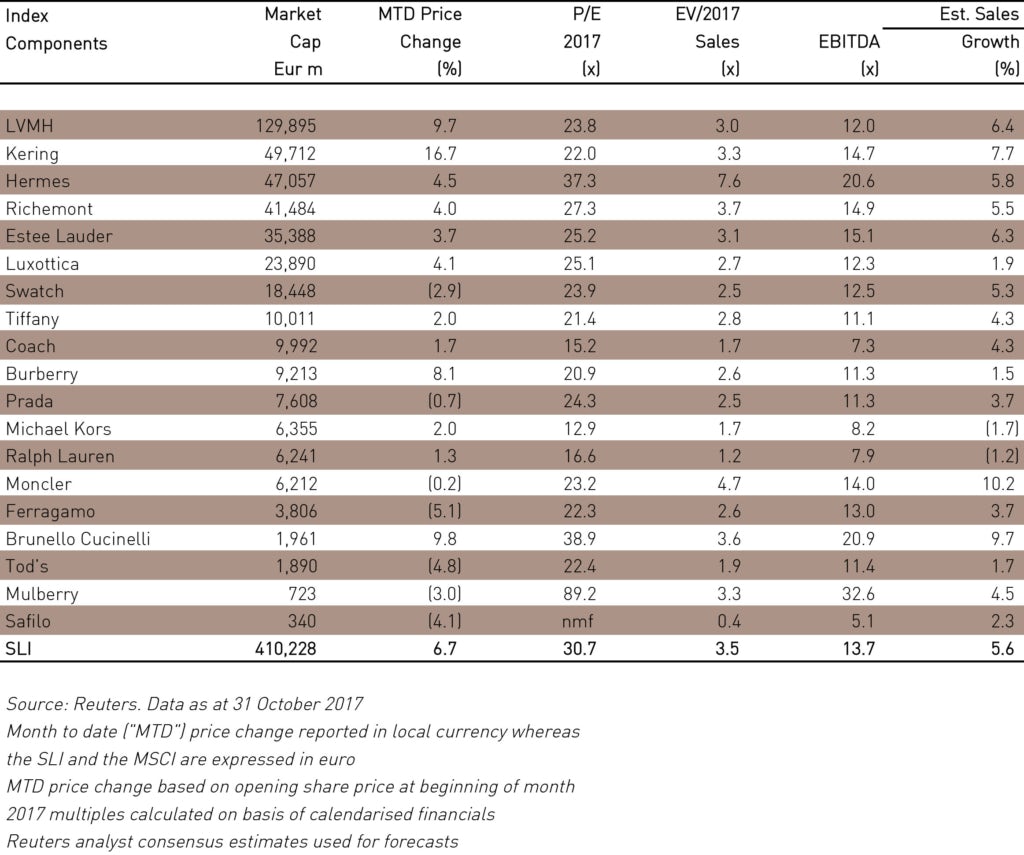