Building on the landmark Models' Charter launched last September, the luxury conglomerates have joined forces again to launch a new website providing models with advice on physical and mental well-being.

PARIS, France — LVMH and Kering have joined forces to launch WeCareForModels.com, a website providing models with information and advice from professionals relating to physical and mental health.

Building on the launch of a new model charter by the rival luxury conglomerates in September 2017, the website offers counsel on nutrition and mental well-being to help cope with stress. WeCareForModels, says Marie-Claire Daveu, Kering's chief sustainability officer and head of international institutional affairs, is "intended for the models themselves." The platform emphasises both companies' commitment to the safety and protection of models and provides, adds LVMH general secretary Marc-Antoine Jamet. 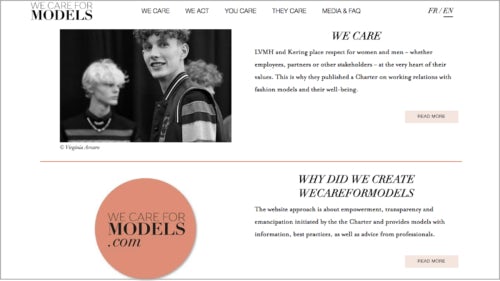 Abuse of models in the industry came to light at BoF's VOICES conference in December 2016, when casting director James Scully described the bullying and cruelty that often takes place at castings, promising to expose perpetrators on social media if such behaviour didn't stop. True to his word, Scully took to Instagram the following March to publicly address an incident that occurred during a Balenciaga casting.

The post went viral, and, within a week, Scully was invited to meet with François-Henri Pinault, chairman and chief executive of Balenciaga parent company Kering, and Antoine Arnault, Berluti chief executive and son of LVMH chairman Bernard Arnault. The meeting resulted in the landmark models' charter, a manifesto for the protection of models that would be adopted by all LVMH and Kering-owned brands.

Speaking at BoF's VOICES 2017 gathering, Arnault re-emphasised LVMH's commitment to the charter: "We have no problem at all not to work with modelling agencies who don't meet this charter no matter how big they are in this industry," he said. "If they don't comply, we will not work with them anymore."

The latest model-protection initiative comes days after The Boston Globe reported allegations of sexual misconduct by a long list of photographers, stylists and model agents including Patrick Demarchelier and Karl Templer. Last month, The New York Times published an investigation into an alleged pattern of sexual exploitation by Mario Testino and Bruce Weber.

LVMH’s Antoine Arnault on Model Safety Charter: ‘If They Don't Comply, We Will Not Work With Them’