GREENSBORO, United States — When the International Textile Group (ITG) announced last month that its Cone Mills White Oak selvedge denim plant in Greensboro, North Carolina — the last in the US — would close at the end of December after 112 years of operation, brands using the fabric, stores selling White Oak products and denim heads worldwide cried with disappointment but not disbelief. ITG said orders slowed with customers buying overseas for cheaper goods. Overhead for a tiny corner of a three football field-long facility that once housed over 2,700 fly-shuttle looms is clearly prohibitive. Some 200 employees will lose their jobs and the future of the remaining 40-odd vintage looms remains unknown.

But while this is yet another nail in the coffin for Greensboro's legacy as a once-booming textile capital, there are signs of life in North Carolina’s apparel industries.

North Carolina, with 42,000 people working in 700 textile or apparel factories, has the largest textile mill industry in the US, according to the state’s Economic Development Partnership Organization (EDPNC). The EDPNC recruits US and foreign textile firms (among other industries) to invest in the state, marketing its integrated supply chain. While automation has invaded textile factories and intruded into cut and sew operations, it can actually boost employment, explained Dan St. Louis, executive director of Manufacturing Solutions Center, a non-profit in Conover, North Carolina focused on R&D, innovative technology, testing and incubator services for the apparel and textile industries.

“If an automated machine can increase your production as part of an effort to add more customers, then automation can actually create jobs,” he noted, adding that on the apparel side, a company would have to add more sewers to keep up with increased production. Yet many manufacturers complain they can’t recruit qualified technicians or sewers because of the lingering and clichéd “sweatshop” image that follows the textile industry. 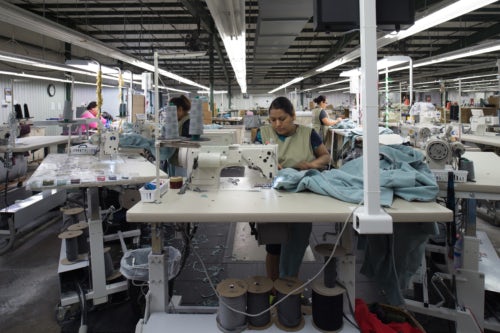 Textile giants including Hanes, VF Corp and Gildan have headquarters in North Carolina, but they’ve moved much of their production offshore. The state lost thousands of industry jobs since the mid-1990s, a trend which manufacturers say started with the North American Free Trade Agreement (NAFTA) a 1994 accord between the US, Canada and Mexico designed to eliminate taxes, duties and other charges related to the import and export of goods between the three countries. NAFTA, plus many other agreements such as Most Favored Nation status from the World Trade Organization that eased trade restrictions from certain countries, on top of low labour wages in developing countries also fuelled offshore production. The result was that local manufacturers were forced to compete with cheaper imports; many could not and folded.

But according to Cluster Mapping, an economic data project between Harvard Business School and the US Economic Development Administration, textile jobs in North Carolina actually rose nearly 3 percent between 2014 and 2015, the last year measured. Apparel jobs, however, fell just over 5 percent for the same period.

Burlington, part of ITG, has three factories weaving worsted wool and synthetic fabrics for clients including Brooks Brothers and the American military, which is restricted from procuring clothing that is not made in the US, among others. Brooks Brothers produces 6,000 button-down shirts weekly at its own Garland, North Carolina factory that currently employs 188 people — in a town of roughly 620 inhabitants — and is adding a third assembly line which should bring the employee count to over 200. The company is trying to develop a luxury performance knit with North Carolina mills for sports polo shirts and plans to make them in-state, said John Martynec, senior vice president of manufacturing. This is part of the company’s drive to increase its “made in America” footprint.

Martynec, like others, likened the emergence or revitalisation of small factories to the growth of microbreweries. Years ago, there were only a handful of nationwide American beers; now there are scores of local brands. “That’s what apparel used to be like in this country: small factories,” he observes.

If an automated machine can increase your production as part of an effort to add more customers, then automation can actually create jobs.

American Giant, the San Francisco-based maker of 100 percent American-made sportswear recently bought three cut and sew factories in North Carolina to keep up with demand for its original product launched in 2012, an $89 cotton-fleece hoodie, and other goods. Two factories are expanding while the third is on hold, slated for a confidential 2018 joint venture. American Giant’s mid-range prices show that North Carolina and the US are capable of producing “exceptional product at a fair price,” not just high-end goods, said founder and chief executive Bayard Winthrop.

Then, there are multimillion-dollar investments from foreign entities into North Carolina. Dr. David Hinks, the dean of the College of Textiles at North Carolina State University highlighted the Sri Lankan-based MAS Holdings’ $20 million acquisition this year of Asheboro’s Acme-McCrary, a 108-year-old maker of hosiery, seamless apparel and active wear, and Taiwan’s Everest Textiles, a performance fabrics maker building an $18.5 million factory in Forest City. The state offers incentives to outside investors in the form of grants, worker training or tax benefits. “We’ve been seeing for several years an intensifying interest by companies investing back into the US in textiles and apparel, especially in North Carolina,” said Hinks.

The reasons are multifold, Hinks and others explained. One factor is that society expects fast response and brands have to deliver more quickly. At the same time, manufacturers are exploring a new paradigm of reducing inventory liabilities and producing faster turnaround in place of the old model of a six-month manufacturing and delivery calendar, observes Edward Hertzman, the founder and president of the Sourcing Journal. To accomplish this, manufacturing has to be done closer to the point of delivery. Offshore production can’t respond accordingly and North Carolina’s historical supply chain, among other textile manufacturing regions, can.

The interest for American-made goods is strong, with 70 percent of Americans stating that Made in America goods are important to them, according to an Ipsos/Reuters "Buy America" survey conducted last spring. Non-American consumers are also attracted to American-made goods. According to this year’s “Made in Country Index” from Statista, a Hamburg, Germany-based research and statistics company, US goods ranked number 1 in reputation for consumers in six Latin American countries along with India, Egypt and the Philippines; and Made in the USA ranks 8th in the world.

Moreover, the new generation of Millennials is interested in a product’s credibility, where it’s from, and what story it can tell, according to Nielsen’s 2015 Sustainability Imperative Report, the findings of which hold true today. 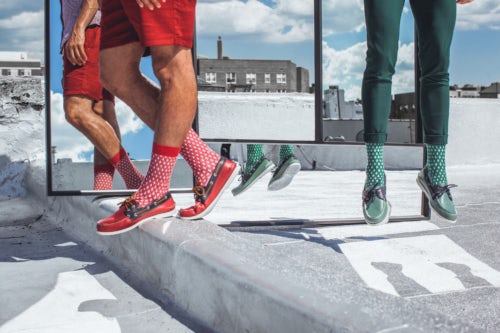 This last point makes the North Carolinian textile base ideal for entrepreneurs looking to launch made in America goods, noted Dan St. Louis. These entrepreneurs are resourceful about the supply chain compared with existing brands stuck in the routine of design/tech pack contract production. The key is finding factories open to new ideas, St. Louis said, such as Opportunity Threads, an employee-owned cut and sew operation founded almost 10 years ago by former teacher Molly Hemstreet as a way to reinvigorate a dying business she grew up with in northwestern North Carolina.

Hemstreet makes everything from t-shirt quilts for Project Re-Pat to merino wool pyjamas for the Chasing Windmills children’s collection. Having the factory be employee-owned helps recruit and retain skilled sewers. There’s little high-tech here except for a Gerber cutting machine that was bought through a grant and which can be used by other members of the Carolina Textile District (CTD), a network of manufacturers Hemstreet founded with St. Louis as a means to provide “one-stop shopping” for companies looking to manufacture in North Carolina. CTD members can share contracts or pass work along to another member if they don’t have the capacity to respond. This policy is intended to keep all members’ facilities at capacity and to avoid the “hire and fire” patterns often practiced by factories with the ebb and flow of orders, Hemstreet said. Opportunity Threads, profitable since 2012,  started with two sewers. It now has 24, and expects to have 40 in a new facility in the next two to three years.

New York City-based fashion sock company Ace & Everett, founded in 2014 by brothers Sage and Cody Disch, is a case in point. The Dischs wanted their men’s hosiery to be 100 percent American-made, yarn included. Research and word of mouth led them to several knitters in North Carolina before partnering with High Point, North Carolina’s Harriss & Covington (H&C), a nearly 100-year-old family business run by fifth generation brothers that counts Smartwool, a specialist in outdoor Merino socks, as its largest customer.

“Other factories felt like they were not trying to evolve,” said Cody Disch, noting that H&C co-president Tyler Covington was game to make the intricately knit jacquard patterns the brothers envisioned. Now, Ace & Everett socks in wool or Supima cotton are sold in over 50 stores, including Bergdorf Goodman and L’Echoppe in Tokyo at an average retail price of $31.

We’ve been seeing for several years an intensifying interest by companies investing back into the US in textiles and apparel, especially in North Carolina.

When Covington joined the company in 2000, many customers were moving to offshore production to lower costs. “I saw the writing on the wall: we had to be more niche. We had to invest in R&D; get used to more SKUs and smaller runs to evolve into more responsive manufacturing,” he said, highlighting his company’s added value. The company recently hired an R&D technician to follow automated production and innovations as well as a designer to offer creative services to clients that don’t have this in-house capacity. Several years ago, Covington bought rows of double-cylinder jacquard knitting machines, rare in the US, from a factory going out of business. This investment is what allowed the company to produce the dynamic designs the Disch brothers wanted to pursue.

Raleigh Denim, in its ninth year, is one of North Carolina’s original entrepreneurial fashion firms. Founding couple Victor Lytvinenko and Sarah Yarborough wanted to make American-made jeans where “the process of manufacturing was as important as the design.” They launched with White Oak denim that accounts for a majority of their jeans production. Their factory, behind the store in Raleigh’s warehouse district makes a few hundred pairs of jeans weekly priced upwards of $195. Limited edition jeans run upwards of $285. They have enough White Oak denim stock for a few seasons and will not be immediately impacted by the mill’s demise.

“Why does it take a closing for people to worry about something staying open?” wondered Greensboro native Evan Morrison, a denim expert behind Proximity Manufacturing Co., a made in the US label that launched last summer with button-down shirts made in Greensboro with dead stock fabrics from nearby defunct mills.

The rumour mill is aflutter with comments about White Oak. There’s speculation that it might remain operational through 2018. Everyone wants to know the future of the vintage looms even if ITG said they are not for sale, and observers are curious about the plant, outlying buildings and the land, assuming it’s all for sale. An ITG spokeswoman said that it’s “too early to have any specific updates.” The healthy members of the North Carolina textile trade, while curious, are too busy to wait and find out.

Unravelling the Myth of ‘Made in America’