ISTANBUL, Turkey — In the middle of Beyoğlu, the old Greek and Macedonian quarter, the sound of hammer on hide echoes down a cobbled street. Two cats lead the way to a leather goods atelier on the third floor of the sturdy, ornate, 18th-century building that is the home of one of fashion’s buzziest contemporary accessories labels, Manu Atelier.

The leather heritage of the Beyoğlu district dates back to the city’s Ottoman era, when its Sultans ruled swathes of central Europe and Anatolia from Istanbul, one of the world’s most sophisticated capitals. But since Eva Chen, the former editor of Lucky Magazine turned Instagram’s head of fashion partnerships, posted a trademark accessories shot of Manu Atelier's Pristine bag in June 2014, Turkish leather couldn’t feel more contemporary. 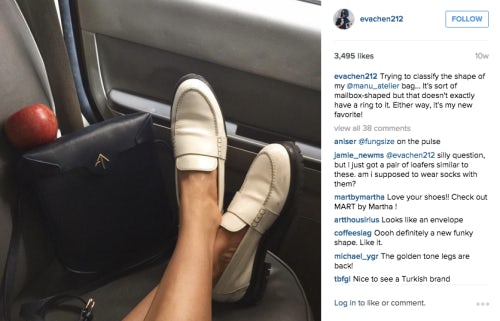 One of three posts by Eva Chen | Source: Instagram

“Everything accelerated when Eva posted it,” adds 29 year-old Beste. “It was crazy. Chinese [along with Turkish] consumers literally bought all of our stock from Vakko.” Such was the demand that Vakko, one of Turkey’s prestigious department stores and the brand’s only bricks and mortar stockist at the time, restricted consumers to buying a maximum of three items per month.

“Retailers started to email," says Beste, so the brand brought on Luisa De Paula to become its global sales agent; she was a London-based buyer and merchandiser with 20 years of experience, who cut her teeth at Selfridges for a decade, before taking roles at Liberty and Mywardrobe.com, and consulting for brands such as Ebay, Mary Katrantzou and Jonathan Saunders. At the time she was working for Boticca, an e-commerce business whose USP was connecting consumers with brands from off the beaten track, which was acquired by Wolf & Badger on 31st of July 2015. “I knew there was something special the minute they sent me the [Pristine] bag. I was so impressed with the quality. Then I met them and I thought that they are marketable in themselves. Over dinner I asked if they were interested in me representing them to launch Manu Atelier as a global brand,” says De Paula, “We were thinking the same thing,” chime in the sisters.

“We needed to figure out the wholesale price — factor in marketing, shipping and distribution costs. Along with that it was late in the buying season,” De Paula explains.

“We were not planning to show the collection to retailers that season, but [changed our minds] having spoken with our father who advised us on production and my husband, who works for PWC, who is our unofficial risk manager and advised us on finance,” continues Beste.

When they started, Merve had limited prior experience of working in fashion: “While I was studying business administration I worked assisting two Turkish fashion designers, Ezra Tuba, and also worked for Vogue Turkey, because I wanted to see the press side of it. Beste was working in the United States Trade programme, but we began to work with our father and designers as leather consultants, using our father’s experience and gaining our own,” says Merve. 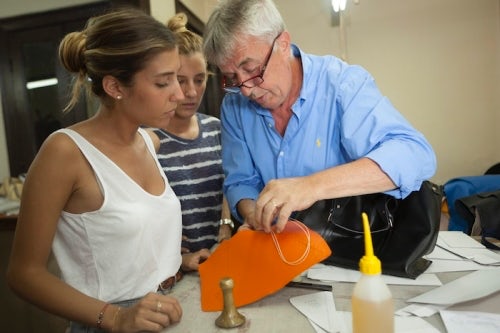 The sisters researched the Turkish market and its leather accessories. “We felt that consumers were more and more willing to buy affordable luxury brands, because the international brands were everywhere and on everyone, but they cost $4,000 rather than $400. And, if it was changing in Turkey, it had probably already started changing internationally, as brands took longer to enter this market,” she continues.

“Technology made the barriers to entry easier, and we were lucky that we had such a big asset in our father. He is a true artisan. While he is watching TV he can draw 10 different styles on his cigarette packet.” To this day the brand has just four permanent craftsman, including both their uncle, Şeref Manastir, and their father Adnan, working from three basic rooms with exposed floorboards, two family photographs and one poster from the 1980s for decoration.

With a budget of 30,000 Turkish lira (about $10,300), they worked on the brand for 18 months before launching with eight styles, three of which were repurposed from their father’s back catalogue and modified for the market, including the Pristine.

“I put one of the photos on Instagram. One of my primary school friends who had started to work at Vakko as a senior buyer saw it,” says Merve. Unusually for a Turkish brand, Vakko bought the line outright, rather than take it on a consignment basis. “They placed an order for 400 units, no test, nothing, which sold out in two weeks. When they came to repeat the order, they said they wanted it for all 24 locations in Turkey,” says Merve. By April 2014, Vakko’s order had gone from 400 to over a thousand units. Today the line maintains an 88 percent sell-through rate at the store.

Then Eva Chen happened. “She posted the bag three times, the last time she described the bag and said it was one of her favourite brands, along with Mansur Gavriel. After that, there was a huge demand from Beijing and Shanghai, we had over 400 emails. To this day we receive 150 emails from China a week, and many of them are buyers, who want to come to our showroom. Boutique One was the first major retailer that expressed interest in us, and we are still in talks with them actually” explains Merve. 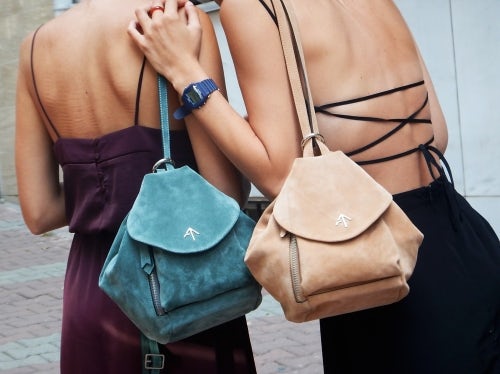 “We weren’t quite ready. But is there ever a perfect time to start to really go global?” adds de Paula. But in two months they pulled together a collection to show buyers in Paris.

“We didn’t want to miss the demand. There was momentum. If you miss that wave, next season it can go in another direction,” says Merve. “We had to decide whether to enter the wholesale market, or not. We needed our father’s opinion on how we are going to manage production part, because, as an affordable brand, we want to keep the profits lower for each bag, but to make money from the wholesale business through volume. He found the eight craftsman that we can employ if a number of big orders come in. We are so lucky that he has been over 50 years in the sector.”

“We did a lot of research and benchmarked the brand with See by Chloe, Mansur Gavirel, Sophia Hume, Marc by Marc, Philip Lim and Alexander Wang,” adds de Paula.

In September 2015, about a month before arriving in Paris for the showroom, Eleanor Robinson, head of accessories at Selfridges asked to launch the bag exclusively in London in December, and make the sisters part of their annual Bright Young Things campaign. In addition, the sisters secured central European e-commerce store Stylebop as a stockist, along with three lesser known international concept stores across the UK and Australia, and Harrods for Autumn/Winter 2016.

“Selfridges is the biggest order we have had yet in importance. When we launch we want to be a sell-out,” adds Merve.

Most recently the Pristine has appeared on the arm of Gigi Hadid’s model sister, and the sisters and their agent now seek to parley the currency of Manu Atelier’s burgeoning profile into an established wholesale business.

Disclosure: The Business of Fashion travelled to Istanbul as a guest of Manu Atelier.

Editors Note: This article was revised on 26th November 2015. A previous version of this article stated that Boticca had folded. This is incorrect, it was in fact acquired by Wolf & Badger on 31st July 2015.