PARIS, France — When 25-year-old Marine Serre graduated with highest honours from the Academy of La Cambre Mode in Brussels in June 2016, her graduate collection, “Radical Call for Love” — an answer to recent terror attacks in Paris and Brussels blending 19th-century Arab dress with modern sportswear — was met with critical acclaim and won multiple national prizes.

In the following months, Serre attracted influential global stockists for her label's debut season including The Broken Arm, H. Lorenzo, Dover Street Market, Opening Ceremony and SPACE by Nordstrom. In March, the brand was selected as a finalist for the LVMH Prize.

“The Broken Arm came to me after the show and it was the first selling moment,” says Serre. “H. Lorenzo [the brand's second stockist] came after and a lot of others followed, but at the time I couldn't offer them anything because I didn't have any production as I'd just come out of school.” 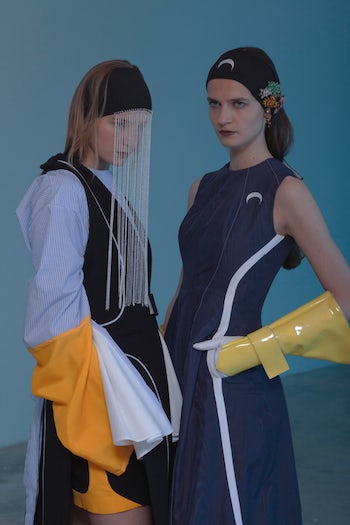 The confrontation between luxury and vulgarity, old and new, and high and low cultures are recurring topics in Serre's work. For her fourth year collection, titled 15-21, she catapulted the 15th century Flemish Primitives into the 21st century. Inspired by the work of Belgian Painter and filmmaker Michaël Borremans, she disrupted the colourful dress depicted by Flemish masters with contemporary colours and materials often found in sportswear.

“Radical Call for Love,” her fifth year graduate collection, further explored those methods. By merging Iranian carpets and moiré with sportswear cuts from the 1990s and 2000s — branded with the Islamic crescent moon as an alternative take on a corporate sportswear logo — the collection expressed connections that to Serre were always already present in modern day Belgium and France and projected them into the future.

“Going to the market and just looking at people on the street, it has something really evident. What's really important to me is that the historical part is there, but not present in a way that it looks like I used old fashioned images and tried to make them new,” explains Serre, whose signature pieces include logo headbands for €94 (about $100), moiré ball skirts for €967 (about $1,050) and pleated cashmere outerwear for €2,381 (about $2,600).

Born in a small village in Corrèze, the French designer initially channelled her ambition into tennis, achieving a high level as a teen, just missing out on a selection for Roland Garros in 2004. Soon after Serre developed an interest in fashion.

“I was really into sports and wasn't into fashion. I was like a little boy at the time. Fashion for me was something to show that I also liked to dress up and be a girl,” says Serre, who left home at 14 to attend a specialist visual arts school, followed by a two-year fashion course in Marseille, before enrolling at La Cambre Mode in Brussels in 2011.

I wasn't planning on starting my own brand but then all the things came and it was really positive.

“I knew Paris wasn't really for me. La Cambre is more about a 3D approach and designing on the body through working with volume. My relationship to Belgium is now something really important,” she says.

Serre did a number of internships as a student, working under Sarah Burton at Alexander McQueen in 2013, Matthieu Blazy at Maison Margiela a year later and Raf Simons at Christian Dior in 2015. “To see the process and assist these designers was great. You have to take the time to understand [the design process]. You learn a lot by looking.”

Serre is now a finalist for the LVMH Prize, alongside Antonin Tron of Atlein, Molly Goddard and Cecilie Bahnsen. In addition to running her young label's design, production, sales and marketing by herself, she recently started as a junior designer at Balenciaga under Demna Gvasalia.

Last week, Serre showed her collection at the International Festival of Fashion and Photography in Hyères, during which she was invited to be a guest designer at Galeries Lafayette. “Things are changing so quickly. At the time I just graduated and I didn't know what I would do. I wasn't planning on starting my own brand but then all the things came and it was really positive,” says Serre, whose first collection will be stocked at seven stockists across 16 doors including I.T Bejing and Ssense.

For this month's Spotlight, Serre has designed a custom BoF logo that takes inspiration from the crescent moon logos in her “Radical Call for Love” collection. “The collection frames this powerful motif as a corporate sportswear logo, the most metaphysical, ideological element of secular consumer culture,” she explains.

Looking forward, Serre aims to build a small team and establish an atelier in Paris in order to respond to the increasing demand of retailers. “Producing a collection is not just [about] designing. There's a big business side to it as well and there are a lot of things you have to know. [Whatever happens] I don't want to loose the non-conventional way of working that you saw in the last collection for the next collections,” she says.