Market Pulse | After the Age of Abundance

Sales of luxury goods are slowing and, given the uncertain outlook, investors are taking profits, reports Pierre Mallevays, founder and managing partner of Savigny Partners.

• The easy pickings have gone, as demonstrated by a general slowdown in first quarter numbers. Sales growth for the sector has sunk to mid to high single digits. Even Prada, a star performer since its IPO, is feeling the pinch. It reported that first quarter growth had slowed from 48 percent to 14 percent. The group plans to lessen its reliance on China, where rapid growth is levelling off, and expand in young luxury markets such as Brazil and Thailand.

• Overall we are of the view that this year’s slowdown is temporary. Growth prospects in China are still very good. Social networks, fashion bloggers and international travel have accelerated the sophistication process of the Chinese aspirational consumer. The market has become less homogeneous; luxury firms are having to adapt to this segmentation. Mega brands such as Louis Vuitton and Gucci are normalising store expansion and segmenting their product offer to lessen the risk of ubiquity.

• Brunello Cuccinelli has been spared from the general sector sell-off due to continued double-digit growth and strong margins, as reported in its first quarter results.

• Almost all of the SLI components have gone down. The worst hit were Ports Design, which continues on its downwards spiral, and Mulberry. The latter posted a severe decrease in annual profits (minus 28 percent), a consequence of lower tourist spending in Europe and a strategic repositioning of the brand upwards, away from its more affordable luxury position.

• China remains the biggest prize in the industry but luxury companies need to adapt to a more complex market reality, to look beyond the coastal cities and to cultivate new types of customers and market niches. The current slowdown has also signalled the end of China as the be-all and end-all of the luxury sector, with management teams now ready again to look at smaller, more creative transactions with a view to build different income streams in the future. 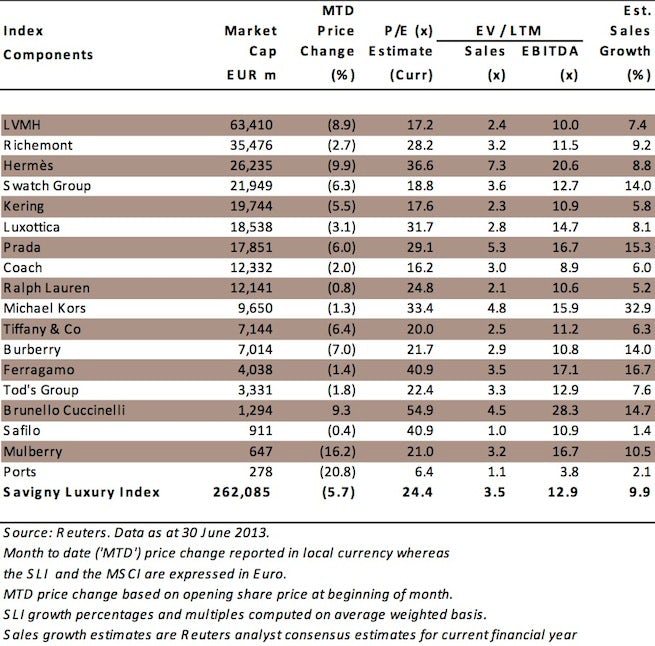