The Savigny Luxury Index lost ground in October, as consumer appetite for mega-brands continues to cool and management changes shake up the industry.

LONDON, United Kingdom — Exceptionally, the Savigny Luxury Index (“SLI”) lost ground in October relative to a rise in the MSCI World Index (“MSCI”).  Our index was down by 0.5 percent, underperforming the MSCI by almost four percentage points, as consumer appetite for mega-brands continues to cool down and high profile management changes shake up the industry.

• Marc Jacobs left Louis Vuitton after a sixteen-year stint as creative director. He will now focus on the potential listing of his fast-growing namesake brand with the aim to emulate the success of Michael Kors. This would be the first time LVMH lists a brand they own.

• Burberry CEO Angela Ahrendts will step down next year to join Apple. Christopher Bailey will combine both the creative and CEO roles. He will thus be the first designer not having started his own house to be promoted to the top executive position. Investors reacted negatively to the big news and the share price lost 6 percent on the day after the announcement.

• LVMH’s disappointing third quarter results had a knock-on effect on the sector. The SLI fell sharply mid-month when the company reported worse than expected sales growth for Louis Vuitton. Several analysts had become quite excited about early sales numbers for the brand’s top-of-the-range Capucine bag; however, the transition to push the brand more upmarket will take longer than some anticipate.

• After a previous deal collapsed earlier this year, the Swiss competition authority (Weko) allowed Swatch to phase out supplying key components to rivals by 2020. This is good news for Swatch as it removed some of the uncertainty surrounding supply obligations. However, the ruling is less welcomed for smaller watchmakers.

• Kering and Richemont are pushing harder to sell unwanted assets, namely La Redoute and Lancel respectively. Both groups are undertaking to inject cash in the businesses to increase their appeal. Richemont is also attracting rumours as to the sale of its other non-watches and jewellery brands such as Chloé and Shanghai Tang, as well as Net-a-Porter, although the group specifically denied the latter was for sale.

• Mulberry recovered some lost ground, going up just over 4 percent for the month.

• Safilo gained almost 4 percent on the back of the appointment of a new CEO, Luisa Delgado, with a strong track record in the consumer sector.

• Tiffany and Michael Kors both gained just over 3 percent last month, with the former’s share price being driven by improving margin prospects and international growth and the latter by the continued success of its affordable luxury positioning.

• Tod’s share price tumbled due to increased political instability and continuing recession in Italy, its core market, representing almost 40% of sales.  The share lost over 11 percent over the period.

• Coach’s share price dropped by 7 percent in October after it posted a steep fall in sales in North America, its largest market, and forecasted further declines for the year as it continues to lose market share to rivals such as Michael Kors.

• Burberry’s share price fell by 6 percent over the month as investors remained unconvinced by the appointment of Christopher Bailey as CEO following the announcement of Angela Ahrendt’s departure.

There are increasingly loud rumbles of a fundamental shift in the luxury customer’s appetite away from the typical product offered by two mega-brands (Louis Vuitton and Gucci) that have been the flag bearers of the sector’s growth over the last two decades. The question is who will fill their shoes? Will privately-held Chanel become the leading anchor brand of the sector? Can Prada overtake Gucci? Or will both mega-brands’ repositioning prove successful and help consolidate their dominant position? 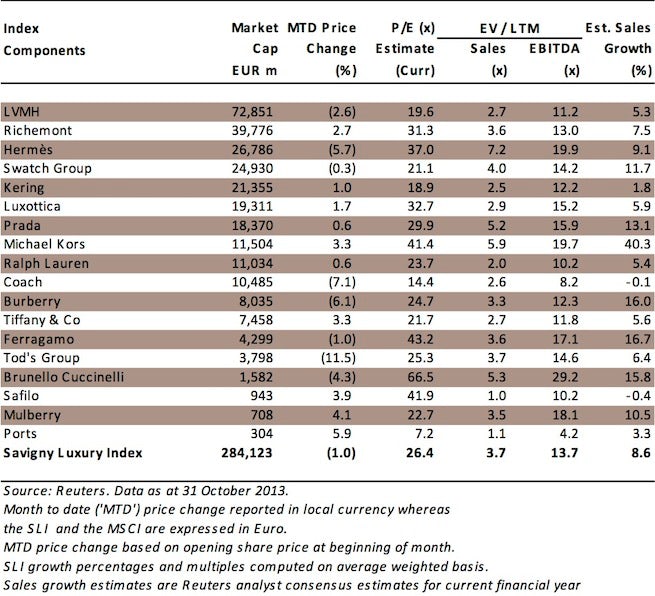