PARIS, France — “It’s quite a revolution, dear Christian; your dresses have such a new look.” This sentence, uttered by Harper’s Bazaar editor Carmel Snow to a then-unknown Christian Dior, has come to define a cultural explosion that ricocheted far beyond the tree-lined boulevards of Paris. After Dior’s debut couture show 70 years ago today on 12 February 1947, Snow’s words were overheard by a sharp-eared Reuters journalist, who within minutes had thrown a message out of the iron-lined window of 30 Avenue Montaigne to a courier at street level.

News of Dior’s wasp-waisted interpretation of pre-war glamour, with its profligate dozen metres of pleats and exaggerated Winterhalter curves, reached tout le monde before the rest of France, due to a month-long nationwide press strike. Overnight, Dior became the most notorious Frenchman in the world. Fashion editors rejoiced at the triumphant return of unbridled Parisian glamour after a decade of occupation-era austerity. Others took a more cynical view; future Prime Minister Harold Wilson banned British Vogue from mentioning the ration-threatening designs; in Chicago, protesters carried pickets shouting “Burn Mr Dior.”

But the couturier had made his mark. Almost immediately, Elle magazine ran a photo of Marlene Dietrich’s calves, “the most beautiful legs in the world,” advising its readers to take a good look because they were likely to never be seen again – the star had just ordered 10 Dior dresses that would conceal her slender limbs to the shin. Where Lucien Lelong and his colleagues had failed to reignite the industry that employed a fifth of Paris’s population before the war, Christian Dior became its deus ex machina. During a short-lived decade, he built the first global couture house; taking it around the world with his cabine of models in tow; launching licensing deals for everything from perfume to hosiery; winning the loyalty of international royals and Hollywood starlets; even penning cookbooks, advice columns and memoirs. Upon his death in 1957, the brand accounted for five percent of France’s GDP. 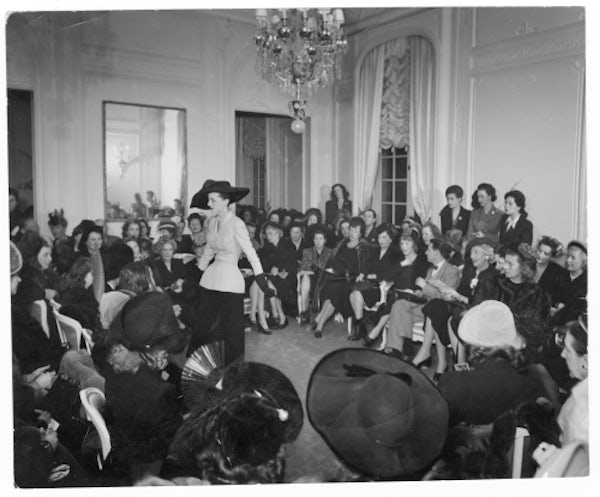 A young Yves Saint Laurent assumed a brief leadership of the Christian Dior house, the first of six designers to take the reins. A year later, a 24-year-old Brigitte Bardot quipped, “Couture is for the grannies.” The golden age, as historians like to call it, was over.

The story is the fabric of modern fashion legend and forms the core of the creation myth that still serves to help sustain the cultural and commercial might of Dior – the multi-billion-dollar, LVMH-controlled fashion house – seven decades later, amidst a luxury market that's being reshaped by globalisation, technology, shifting consumer values and rising geo-political uncertainty.

Indeed, for the last three years, Dior has been thinking hard about the importance of its legacy. To commemorate its platinum jubilee, the brand has built a state-of-the-art archive — ‘Dior Heritage’ — in an underground location only a stone’s throw from its corporate headquarters. Unlike the anodyne environments of most archives, usually cramped and poorly lit, this pristine space is akin to a temple-like luxury flagship, dotted with the house’s motifs: spritely orchids elegantly placed on Brescia marble; Provençal ‘Trianon’ grey walls adorned with the instantly recognisable Fontages bow mirrors; and amber-lit glass cases that echo the brand’s retail windows. It may seem excessive, but then again there are very few brands that can claim such heritage, let alone afford to build a dedicated space and team of the scale required by the endeavour.

“When I arrived, the first thing was to analyse the New Look because it is so specific,” says Maria Grazia Chiuri, the ex-Valentino designer who was named creative director of Christian Dior last year, at a time when designer turnover at top luxury houses seemed to have hit an all-time high. “It didn’t even fit on our model. Sometimes we have this image of it being so elegant, and it was also because after the war there was no food!” She laughs, before returning to a thoughtful state. “You realise immediately it is too difficult to propose something that is so close to the original. You have to use your imagination — not to look directly at the original, but your memory, because you can trust yourself to fall into something that is more contemporary.” 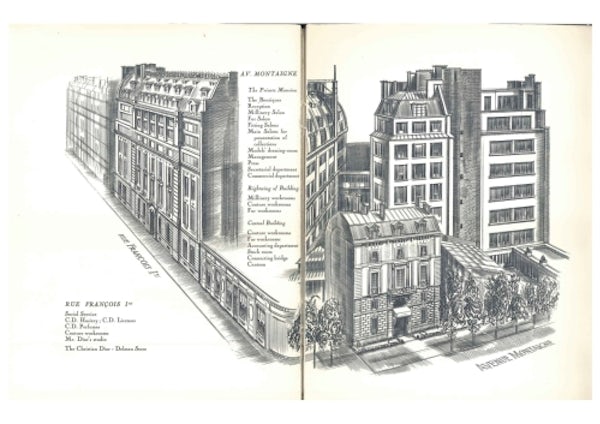 The corner of the Avenue Montaigne that Dior has called home since 1947 | Source: Dior Heritage

Back in her L-shaped office atop the vast corner of the Avenue Montaigne inhabited by Dior, the platinum-haired designer is sans smoky eye and sitting at a table piled with periodicals. On the walls hang artworks by contemporary Italian artists: Pietro Ruffo’s large circular horror vacuii of inky paper on canvas, not unlike a Valentino camouflage print; a few Franco Angeli drawings above her desk; and an ethereal Michael Gambino sculpture of a flutter of butterflies emerging from the pages of an antique book. Under a table sit six square grey boxes, each of which is dedicated to one of her predecessors and contains index cards pertaining to pieces from their oeuvre. The boxes were a gift from the PR department upon Chiuri’s arrival.

“I see myself as a curator and a designer of this brand,” she stresses carefully. “Dior has huge stories and it wasn’t just only ten years and — it’s about all of the designers. When I started, it was difficult to understand all of it because it’s such a long story and I decided to choose some pieces from different moments of the history.”

Chiuri is not only Dior’s first female creative director; she is the fourth to be a non-French native. “If you speak to me about Italian brands, I know them very well — and they’re much closer to the story of prêt-à-porter,” she offers as a way of emphasising how much of an aid the Dior archive has been in her new role. “At a brand like Dior, in some way, the designer is important, but what the people really want is Dior. We live in a very egocentric world now, but in the future, what you remember is Dior.”

At a brand like Dior, in some way, the designer is important, but what the people really want is Dior. We live in a very egocentric world now, but in the future, what you remember is Dior.

“I believe that there is a new generation that don’t know fashion so well,” she says. “With the web and Instagram, the millennial generation only know fashion now, but not the history of fashion. Sometimes, if you read the comments on the Instagram, you see the people who write are not so informed about the history of fashion. Not just about Dior, but about all the brands. If you have a big story and you want to maintain your iconic element, you need to protect it and speak about it.”

Inside the archive, the extraordinary attention to preservation is at a level on par with the savoir-faire of haute couture. Custom hangers and mannequins have been individually designed for the shape of each garment, which hang with enough space to be untouched by their neighbours. Shelves upon shelves of uniform grey boxes contain accessories with custom-built moulds; jewellery boxes are designed with outlined foam beds to ensure that they are not displaced; documents, letters and ephemera are kept in similar boxes labelled with precise calligraphy. Then there’s the office space for the team of a dozen archivists; a Dior library, complete with wood-panelled shelves and a gargantuan concealed screen; as well as a space dedicated entirely to the preservation and packaging of garments.

Soizic Pfaff, Dior’s chief curator since 1996, is the woman leading the brand's archive into the 21st century and the smile on her face throughout the day is indicative of just how important her department has become. “The archive only really began when Mr Arnault bought Christian Dior in the early-1980s, so it wasn’t until 40 years after the start of the company that it was started,” she explains. “Also, the lady in charge of the archives only wanted to acquire Mr Dior’s garments. Now we try to buy more from the whole timeline — pieces from [Marc] Bohan, Saint Laurent, Galliano. What we are trying to do is work with museums and collectors and clients to create a complete inventory of every single garment around the world.” 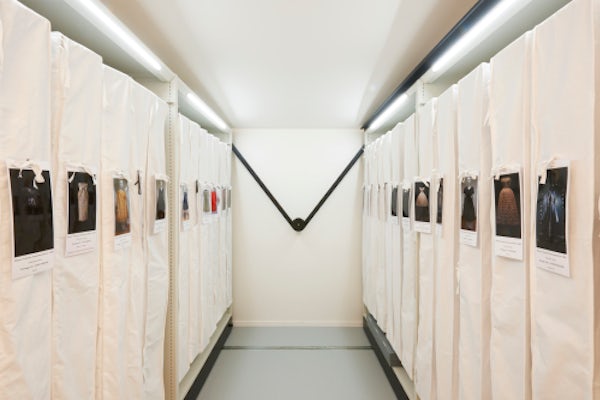 The previous archive was far from Dior’s headquarters in a small space that Pfaff says wasn’t ideal for the garments and prevented guests from visiting. Olivier Bialobos, Dior’s vice president of international communications, who spearheaded the project of revamping the archive, is keen to utilise it to its full potential. Although the new space will not be open to the public, it will inform several avenues of the business; as a resource for the design department; as a space for educational conferences for internal staff, from store managers to executives; as a showcase for guests of the brand, from high-profile clients to fashion students; as well as informing Dior’s marketing.

“We need to give value to all the stories and with all of the cruise shows, we try to create a link because Dior was one of the first to create international subsidiaries,” says Bialobos. “For example, for the last cruise show at Blenheim Palace, we brought a lot of the things we had in the archive to display and show the history.” By stories, he also means the vast amount of content that large-scale fashion brands now create, to populate everything from social media platforms and experiential retail programmes to exhibitions and heavyweight tomes, such as ‘Dior by Christian Dior 1947-1957,’ the recent release from Assouline and the first of a series that will cover not only the tenure of Mr Dior, but the contributions of each of his successors: Yves Saint Laurent, Marc Bohan, Gianfranco Ferré, John Galliano and Raf Simons. 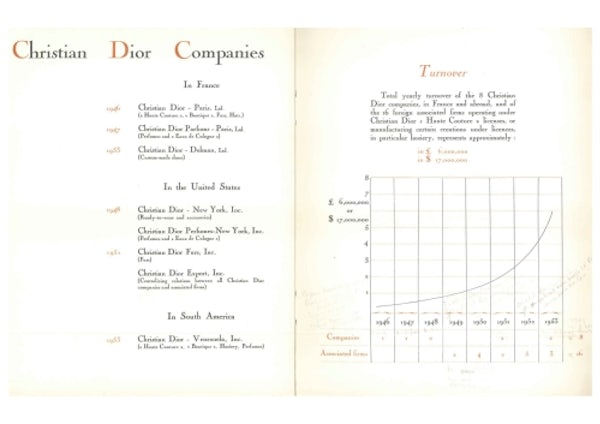 Which brings us back to Maria Grazia Chiuri. Pfaff informs us, with great excitement, that Chiuri was the first creative director to take an avid interest in the finer details of the original business. It is true: one couldn’t help notice that on Chiuri’s desk is a peculiar-looking document, sitting in sharp contrast to her collection of glossy magazines and art books. It is a scanned copy of Dior’s business plan from 1952. Flicking through it with her, it is noticeable how little emphasis is placed on aesthetics. Rather, the document is a sign of just how entrepreneurial Christian Dior was, exporting to more than 27 countries, establishing international licenses and pursuing rapid expansion year after year. “It’s unbelievable. Can you imagine a designer at that time being so…” — she pauses — “…ambitious. It’s unbelievable.”

The thought of Chiuri considering the business documents in the new archive as inspiring as the garments provides an interesting insight into just how mindful she seems to be of the commercial side of the large, multi-tiered Dior brand, whose name helps shift everything from haute couture gowns to fragrances sold at airport kiosks.

Of course, Raf Simons offered lack of creative consistency — and his own creative control — across the various parts of the sprawling Dior business as part of the reason for his departure from the company. But Chiuri has a different point of view.

“If you want something that is closer to you, you should to do your own brand,” she says. “If you decide to be a designer at a brand like Dior, you have to think about it as a greater picture. You have to mix it with your history, and find the right balance for the brand because around the world, what the people know is Dior — and you can never forget that.”

Disclosure: Osman Ahmed travelled to Paris as a guest of Christian Dior Couture.