Alternately adored, reviled, overlooked and imitated in his own day, Margiela's influence has nonetheless permeated widely.

PARIS, France — With Martin Margiela, the rule was silence. The creator didn’t explain.

After an interview in his earliest days in business, Mr. Margiela decided he’d had enough. “He told me on the way back, ‘I don’t think I’m going to do interviews anymore,’ ” said Pierre Rougier, who worked as a press officer for the company back then. “That was it. It was not a strategy. He just didn’t want to do it.”

It hardened, over 20 years at Maison Martin Margiela, into a philosophy. The clothes spoke; their designer didn’t.

But the clothes spoke loudly. Mr. Margiela, at the label he founded in 1988 with Jenny Meirens, renovated fashion as radically as Balenciaga or Courrèges. As a full-throated new retrospective just opened at the Palais Galliera, the city of Paris’s fashion museum, makes clear, Mr. Margiela is one of the great godfathers of conceptual fashion as we know it today. Alternately adored, reviled, overlooked and imitated in his own day — one former employee arched an eyebrow at the rose-colored glasses with which many critics now look back on those years — his influence has nonetheless permeated widely. 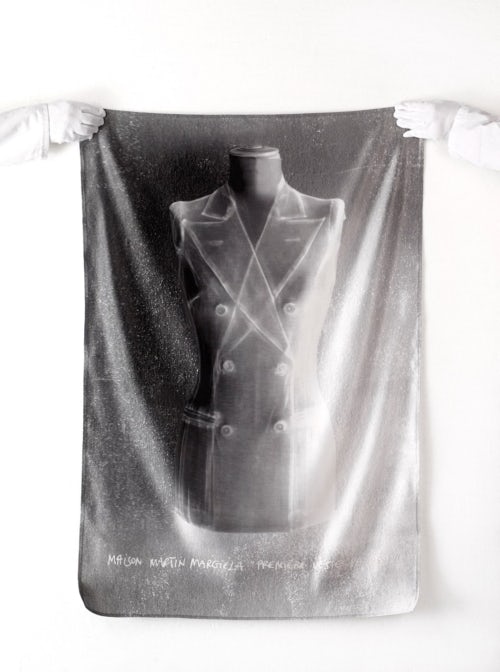 If there’s a shock to be had in the show, on view through July 15, it’s not from the Margiela pieces that are already well known. It’s from those pieces you didn’t even realise he did first. Mr. Margiela hasn’t been forgotten. He’s barely even been gone. (A complementary exhibition, on Mr. Margiela’s years designing for Hermès, is scheduled to open at the Musée des Arts Décoratifs on March 22.)

Nine years after stepping down from Maison Martin Margiela (now known as simply Maison Margiela, Martin having left the building), Mr. Margiela still will not speak.

Contacted via Olivier Saillard, the former director of the Galliera, who worked on the exhibition, Mr. Margiela declined to comment, even by email. But the exhibition itself is his comment. Mr. Margiela is its “artistic director,” not only its presiding genius but also its guiding docent, painting every bit of makeup and body print himself.

Here on view are the hallmark Margelian heresies: the oversize collections, the collections built on painstakingly recreated dolls’ clothes, the “horizontal” collection that whips around the body. But here, too, are incursions into classical elegance, like his famous Stockman collection, a study on traditional draping (with pieces of the dressmaker’s dummy attached); into punk (a gappy, frizzled sweater from an early collection that was knitted by his mother, on broomsticks. When 40 orders were placed, she had to convene a knitting circle of friends to get them all done); into out-all-night disco fabulosity (when Mr. Margiela finally decided to make high heels, he trashed them first for authenticity, and then sent models wearing them walking down a cardboard runway, which they pierced with every step).

It’s hard not to think that Mr. Margiela appreciated the opportunity to underscore his legacy and his achievement at the present moment, when his influence feels particularly strong. His clearest acolyte is Demna Gvasalia, whose work for Vetements and for Balenciaga makes frequent homage to Mr. Margiela’s: In its often oversize proportions, in its interest in the gesture as well as the form of clothes, in its appetite for replication and recycling of old garments. That makes sense: Mr. Gvasalia spent several years at Mr. Margiela’s maison.

But plenty of designers who never came through its doors borrow nearly as much: establishment heroes like Phoebe Philo; Thom Browne; young guns like Glenn Martens of Y/Project, which won the French Andam fashion prize last year, 18 years after Mr. Margiela won it himself. He staged collections in out-of-the-way places, shot films in lieu of shows, featured friends and untraditional models in his collections, doubled back on successes and remade found items stitch for stitch. All of these ideas have since become commonplace. Mr. Margiela got there years ago.

He was a serious student of fashion, whose preoccupations and obsessions were evident from his first collections: With tailoring (he bucked the ’80s trend for giant shoulders and developed his own narrow shoulder line instead), with proportion (caroming between tracing the body and exaggerating it under oversize designs), with colour, with construction (his use of darts, seaming, exposed linings, raw seams), with trompe l’oeil.

But he was also a gleeful pinprick to its pomposities. He held shows in abandoned metro stations, in supermarkets, in far-off, still gamey corners of Paris far from the prim enclosure of the Louvre, where many of his fellow designers showed. He made clothes out of subway station posters, the shoe-printed runway from his first show (he had dipped the soles of the models’ split-toed "Tabi" shoes in paint), flea market scarves, old theatre costumes and vintage clothes. When critics complained that his recycled pieces looked worthy of the Salvation Army (“Armée de Salut” in French), he staged his next show at the Armée de Salut, complete with band.

It’s not an exaggeration to say that Mr. Margiela, more than almost any other designer of his generation, haunts fashion. (It’s what makes it almost startling to see pieces like his XXXL dress form in the show, an antique American castoff on which he built his oversize collections, grand and faintly numinous.) As the fashion industry circles Paris for the fall collections this week, among their ranks are plenty of veterans who saw Mr. Margiela’s collections in their day.

For critics of long standing, bragging rights are accorded to those who saw Mr. Margiela’s first show, or his second, or his last, in 2008, which capped his career and after which he disappeared. (True to form, despite rumours, no official announcement of this came until later.) “You were living a landmark moment; you could feel it,” came a wistful sigh from the table next to mine this morning, about the early years.

But the moment may have shifted. “Margiela belongs to this long, noble history of fashion in which creating your own house with your name, your signature, is a daily engagement,” Mr. Saillard said in an email, lamenting the rise of conglomerate luxury groups and the loss of independence like Mr. Margiela’s. “Since Margiela, we are talking more about designers schizophrenically walking through different houses, like ghosts.”

Alexandre Samson, who curated the show under Mr. Margiela’s direction, called him the greatest designer of his time. Out of discretion, he wouldn’t say what Mr. Margiela is doing now, though he did say the designer has kept an eye on the industry, with no evident pleasure.

“He’s quite sad about how it is,” Mr. Samson said.

“He said he couldn’t have been Martin Margiela if he had to create that. He had the liberty and the freedom to do things at the end of the ’80s that, as a new designer, it’s quite difficult to do today. He dared to do things.”

Why, I asked him, do you think he’s had such a lasting influence?

By Matthew Schneier. This article originally appeared in The New York Times and was legally licensed through the NewsCred publisher network.