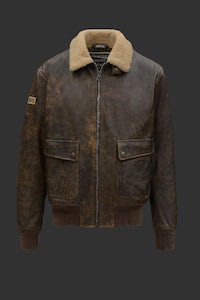 LONDON, United Kingdom — British heritage brand Matchless London has unveiled a leather bomber jacket inspired by Russian president Vladimir Putin. The $1,699 “Putin” jacket is part of a wider capsule collection that will include leather and cotton parkas, coats and jackets — all inspired by the controversial leader — available at the label’s London flagship store in January 2018.

The jacket is the newest addition to the brand’s limited-edition “Heroes” collection, which features recreations of its custom outerwear pieces made for cult movie characters like Han Solo or Bruce Wayne. “We consider Russian President Vladimir Putin a modern superhero as well, giving personal respect to his strong character, brutal image, sense of humour and calmness as a world leader,” says Manuele Malenotti, managing director of Matchless London. The capsule is inspired by the Russian president’s unconventional routine and images that include him riding horses and motorcycles, playing ice hockey and practicing judo at age 65.

As for it being controversial, fashion designers are artists [and] politics is a great source of inspiration and debate.

While the collection is bound to spark ire among consumers who oppose the politician's role in the current political unrest sweeping the globe, Matchless is undeterred. "Russia is a very strong potential market for a luxury brand such as Matchless. [We're] very keen to expand there in the forthcoming years," says Malenotti. "As for it being controversial, my point of view is that fashion is art. Fashion designers are artists [and] politics is a great source of inspiration and debate."

Founded in 1899 in the UK, Matchless was the first motorcycle companies to launch its own clothing, which became popular in the 1920s and 1930s. In 2012, the trademark was acquired by Franco Malenotti, Manuele's father and the man behind Belstaff.