Bumble and Bumble founder Michael Gordon wants to shake up the industry once again with a new salon, a savvy digital content strategy and a product line called Purely Perfect.

NEW YORK, United States — Jessie Yip found herself on the other side of the lens. Her friend, Nova Pan, had taken the photographer to Hairstory, a new salon in New York’s financial district where the team cropped and shagged her hair, tinging it with a greyish lavender hue they called “smoky amethyst.” Yip’s colour process was then photographed and published on Hairstory.com and disseminated via the salon’s Instagram account.

Hairstory, which opened in 2013, is not the sort of place one visits for a quick fringe trim or blowout. In fact, it’s not the sort of place most of us visit at all. Located inside the 6,000-square-foot home of Bumble and Bumble founder Michael Gordon, Hairstory is a private, invitation-only space where legendary French hairstylist Didier Malige has been known, on occasion, to take one of the three chairs. “Seeing that it’s a big place and it’s empty most of the time, it seems like the obvious thing to do. Even though we look sort of plush, we’re a start-up and I didn’t want to spend $25,000 a month on rent,” says Gordon, curled up on a couch in his office, just beside Hairstory’s photo studio.

To make an appointment, clients must have one of the salon’s business cards, passed along by an existing client, who are given precisely one card each to distribute. Those without cards can email thetenthfloor@gmail.com to request an appointment, or models@hairstory.com to become a subject of one of the salon’s editorial shoots. But Hairstory’s models are more likely to have been recruited via Gordon’s personal network or scouted on the street. The Hairstory team — which includes hairdressers Tony Kelley and Wes Sharpton, as well as colourist Roxie Darling — transforms these subjects, like Yip, into content that, ultimately, helps to generate awareness and communicate the essence of the one-year-old brand. 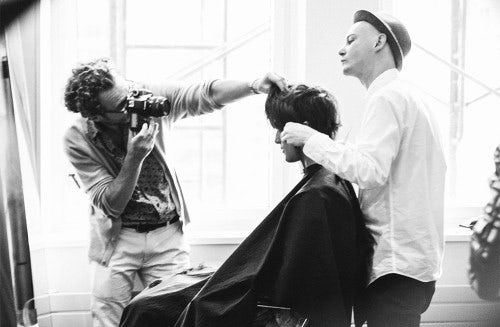 It may sound like Gordon is trying to invent a newer, more digitally-savvy version of Bumble and Bumble, the salon he opened in 1977 on New York’s East 56th Street. But while he’s certainly building a new brand, it’s not the business of salons that interests him. Gordon is intent on shaking up another much broader business on which he has already left a permanent mark: hair care products.

Gordon, 63, was raised in London. His father was a wool merchant and his mother was a hairdresser who owned her own salon in the city’s Maida Vale district. His first apprenticeship, at 15, was with René of Mayfair, a salon that catered primarily to aristocrats, princesses and American socialites. “It was an education in so many ways,” said Gordon. But hip or cool it was not. Leonard Lewis, creator of Twiggy’s cropped haircut, better fit that description and, at 17, Gordon began working at The House of Leonard. Just two years later, he was appointed the creative director of Elizabeth Arden’s salon on Bond Street. By the time he was 21, Gordon was living in Johannesburg, where he opened his first salon in a 400-square-foot space. He came to New York in 1977 and bought an existing business on what was then known as Hairdressers Row. Bumble and Bumble soon became known, beyond its quirky moniker, for its relaxed atmosphere and reasonable prices. In 1978, American Vogue named it one of the top 10 salons in New York. But it wasn’t until the early 1990s that the stylist began developing his own products, including a coveted styling cream and, later, Surf Spray, the saltwater texturising spray that launched a thousand imitations.

Gordon’s approach was unheard of at the time. Rather than working with wholesale distributors, he sold Bumble’s coveted hair products only at his own salons and the stores of hand-picked partners, who were required to fill out a rigorous application in order to be to considered. He also took a different approach to styling: instead of trading on a made-up, pristine look, Bumble and Bumble sold products associated with an image that was much more undone. Curl Creme did away with crunchy ringlets; Surf Spray offered a laid-back, day-at-the-beach look.

In 2000, a year before he launched Surf Spray, he sold a 60 percent stake in the company to Estée Lauder. (The dollar value of the investment was not disclosed.) In 2004, he opened the House of Bumble in New York’s Meatpacking District, a salon-meets-training school. But he sold the remainder of his stake in 2006, taking time off to produce the documentary Vidal Sassoon: The Movie, while he let his non-compete clause ride out. Gordon never worked for Sassoon and, in some ways, this has steered his career more than anything. “Most hairdressing names were sprung from Vidal Sassoon and they just all did a version of that,” he said. “Bumble was about doing something that no one else had done. Not for the sake if it, just because it seemed silly to do what already existed.”

Gordon was not meant for a quiet retirement, however. In 2012, he was arrested and charged with lying to a federal agent after allegedly failing to report the $29.6 million he made by selling the remainder of his stake in Bumble and Bumble to Estée Lauder in 2006. At first deemed a flight risk, Gordon was released on a $4 million bond and granted permission to travel in 2013. Gordon declined to comment on the case, but his lawyer, Pat Pileggi, confirmed that she was endeavouring to resolve the matter out of court.

Gordon had long planned to launch a new concept: to take everything he had learned from Bumble and do it better. He began by assembling a team, including longtime publicist Kim Smith, as well as Sharpton, who had established an editorial name for himself. At one point, Gordon even entered into talks with JCPenney chief executive Mike Ullman to make over the struggling retailer’s vast salon network. This was during Ullman’s first go-around and Gordon subsequently dealt with Ron Johnson, but the plans never came to fruition. “We picked it apart and it became a part of what we’re doing now,” said Gordon.

Hairstory is a salon and creative outlet — a chance to share stories and editorials with the public — but the core of business is a product line called Purely Perfect, which eschews harsh ingredients. Gordon believes that sulfates, detergents and silicones — critical to the formulas of many shampoos and styling products — can actually damage the hair and scalp. “I’m pretty convinced that sodium lauryl sulfate is the worst thing you could put on your hair,” he said. 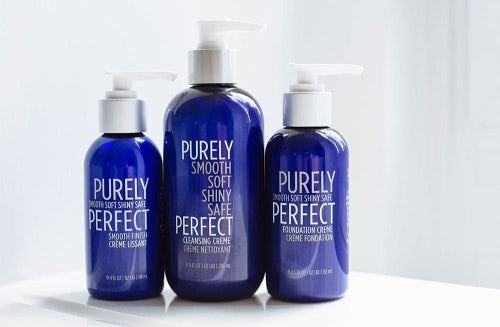 In doing research for the new brand, Gordon came across Less is More, an Austrian line operating with a similar ethos, and took note of direct-marketing company Guthy Render’s WEN haircare line, a no-suds collection sold primarily via infomercials and home shopping channel QVC. Unsurprisingly, Gordon was unimpressed with the formulas and set out to make his own collection.

Purely Perfect by Hairstory launched in spring 2014 with three products: detergent-free Cleansing Creme, which removes dirt and buildup; Foundation Creme, used for wet styling; and Smooth Finish, meant to be used before blow drying. The Foundation and Cleansing creams retail for $40. Smooth Finish is $34. Hairstory plans to never produce more than 10 unique products. “I don’t think it’s modern to be cluttered,” said Gordon. “I don’t think hairdressers understand between 90 percent of the products. It’s an old model that’s run out of steam.” In fact, while Gordon confirmed that he has already developed more products for Purely Perfect, he won’t release them until he feels that the timing right. “Most of us here, we wash our hair, bodies and face with the cleansing creme,” he said. “Yes, we may make a standalone men’s something, but we’re not going to make stuff that’s just marketing BS.”

Hairstory is also focused primarily on online distribution, selling via its own website as well as the sites of partners including J.Crew, Net-a-Porter and Urban Outfitters. “I knew I wanted to do an e-commerce business,” said Gordon. “I had no idea how you did that, but I didn’t really have any idea when I started Bumble, either. Salons are not really the plan,” he continued. “We have some, but it's not the business we’re going after. We want to sell direct to the consumer.”

While Gordon declined to reveal sales figures, he said the company is “this close” to being profitable. “The five year goal is to become a very big small company. There’s something to be said for being small, but having a big reach,” he said. “We feel that we are on the forefront of the less-is-more movement and that there will be a rebound to all of the needless products that our industry is creating.”

And while the Hairstory salon may be something of a pet project for Gordon, it’s one that he knows has legs. “If we had the money, I would like to do this in a few cities,” he said. But don’t expect Gordon to go on a fundraising roadshow any time soon. “The few private-equity people I’ve spoken to, they don’t really care. It’s just numbers and I absolutely wouldn't do anything that would jeopardise control.”