How Michèle Lamy fused boxing, art and fashion for a knockout intervention at London’s Selfridges. 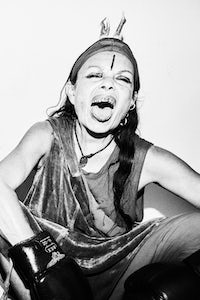 How Michèle Lamy fused boxing, art and fashion for a knockout intervention at London’s Selfridges.

LONDON, United Kingdom — Of all the graphic images that spring to mind when I think about the extraordinary Michèle Lamy — sorceress, gypsy princess, high priestess, maenad, sphinx — I can swear in all honesty that “defence attorney” was never one of them. And yet, in a previous incarnation, that is exactly what she was. In the 1960s, she worked at a legal practice in Lyon while studying philosophy at the local university under Gilles Deleuze, the man she calls her mentor. His specialty was something called “transcendental empiricism” and his psychiatric interventions in Lewis Carroll’s Alice books were hugely influential at the time. They may well have helped Lamy in her own specialty, which was defending sex offenders.

Difficult, but that’s what appealed to her about the law. “I have a combative mind,” she growls, in a voice so alluringly odd, so exotically accented it’s like an aural correlative to the signature scent she is launching momentarily. It’s her love of combat that shapes the Lamy collaboration British department store Selfridges is launching this week. For three months, the store’s London location is surrendering its new Corner Shop, at the junction of Oxford Street and Duke Street, and its basement UltraLounge to Lamyland, a multilayered immersion in Michèle's multifaceted world.

The catalyst for the takeover was Sebastian Manes, Selfridges buying and merchandising director, who is a longtime friend of Lamy’s and her husband the designer Rick Owens. He originally approached her about doing some kind of jewellery collaboration for Christmas, but she came back with a different idea: boxing and art, two of her grand passions. Somehow, the silver-tongued Manes sold the idea to the store and that is why, when you venture into Selfridges over the next few months, you will find a score of exclusive boxing-related capsule collections by the likes of Versace, Off-White, Stephen Jones, Gareth Pugh, Koché and Owens, of course, alongside merchandise from sportwear pros like Everlast. Plus the coup de grace: a fully equipped boxing gym in the basement, installed in tandem with BXR London, the gym where Anthony Joshua trains.

He’ll be making appearances at Lamyland. So will Olympic champion Nicola Adams who, with Joshua, has surely helped change the profile of the sport of boxing. It’s become a fashionable training regimen, with the likes of Gigi Hadid happy to promote it. Manes says most of the women on his team at Selfridges box as a regular workout. And it is about the training, not the fighting. No more "Rocky" or "Raging Bull." Lamy learned this decades ago when she moved to LA, after her Studio 54 years in New York. Back then, she had her own fashion label (she met Rick when she hired him as a pattern cutter) and her own fiercely trendy restaurant Les Deux Café, and she was drawn to the local boxing club, the Wild Card, as a place to exercise. “I was the only 'tourist' at the time,” she recalls. “They called me Frenchie.” That was still how the regulars remembered her years later, when she, now resident with Owens in Paris, returned to LA to mount a show of their furniture designs at MOCA.

Boxing is a state of mind. It’s a place where you just think about what you are doing, in the moment. Fascinating, like playing chess.

“Boxing is a state of mind,” Lamy rhapsodises. “It’s a place where you just think about what you are doing, in the moment. Fascinating, like playing chess.” But the sport also had a romantic renegade aspect which appealed to her, same as it did to artists like Francis Bacon and Jean-Michel Basquiat. One of Lamyland's contributors is the Overthrow Boxing Club in New York. It’s on the corner of Bowery and Bleecker, close enough to the original site of punk mecca CBGB’s for Lamy to label the Overthrow the CBGB’s de nos jours, with the obvious equation of punk and boxing as some kind of rebel yell. She has made the Overthrow’s battlecry “What are you fighting for” into a key point of Lamyland's manifesto. (Another, less inspirational, is “Please Kill Me,” the title of Legs O’Neil’s definitive oral history of punk.)

Slot that next to Versace’s rococo boxing silks, or Gareth Pugh’s Swarovski-studded towelling robes, cut from the same terrycloth that Claridge’s uses for its towels, and you get the full scope of Lamy’s concept: from purest function to purest fashion, louche to luxe. The peripheral programme of events surrounding Lamyland includes film nights at the ICA, rap battles on the London-based digital station NTS and a big-up for the Raw Power movement, which is helping activist organisations bringing their messages to the wider world.

The curated life is a modern cliché, but when it’s approached with the range of interests possessed by a woman like Michèle Lamy, it becomes something transformative, even more so when it’s given a platform like Selfridges, where it's possible for her to take experiential retail to new heights. “It’s not something we would normally do,” Manes agrees. “We usually collaborate with designers and brands, and Michèle doesn’t actually create clothes. But I feel that together with Lamyland, we’ve almost made a new fashion brand.” Or, at the very least, birthed a new fashion tribe, with the pugilist art at its core and Michèle Lamy as its matriarchal head. She loves the idea of Lamyland as a bazaar, a marketplace where people come to share their stories. She’d like to take it to Dubai under the auspices of the Sharjah Foundation. “There’s a great boxing ring in Dubai,” she says, “and a lot of women box there.”

Surprising… but Michèle Lamy and Rick Owens are always surprising, their own personal dynamic endlessly refracting, recombining the arcane and the familiar into provocative, instructional hybrid forms. So I’ll leave you with a handful of the most unusual — and potentially timely — retail options you’ll have in 2018. Boxing gloves. Do you think Versace’s Medusa-headed animalier versions, or the Elder Statesman’s cashmere mitts are for poseurs only? Would you rather land a punch with Overthrow’s gloves blaring RESIST and UNITY, or Everlast’s classic red? Whatever, at the sound of the bell, you can spritz yourself with the smell of champions, courtesy of Lamy’s fragrance find Edward Bess. He’s created three scents: Blood, Sweat and Tears.