For eight weeks, young singles flirted, partied and lounged by the pool in a secluded villa on the island of Majorca off the coast of Spain. Millions of viewers tuned in six nights a week to see who had coupled up and who was getting “dumped” from Love Island, and downloaded the official Love Island app to vote for their favourite contestants. Many of the contestants’ clothes — when they were wearing any — were provided by online fast-fashion retailer Missguided. Viewers could shop their favourite looks, from animal-print bikinis to plunging embellished jumpsuits, via the app and on the retailer’s website.

And they did. Missguided says the reality television smash boosted sales by 40 percent compared with the eight weeks prior to when the show started airing. Some items worn by popular contestants — known as Islanders — would see an instant 500 percent sales bump. 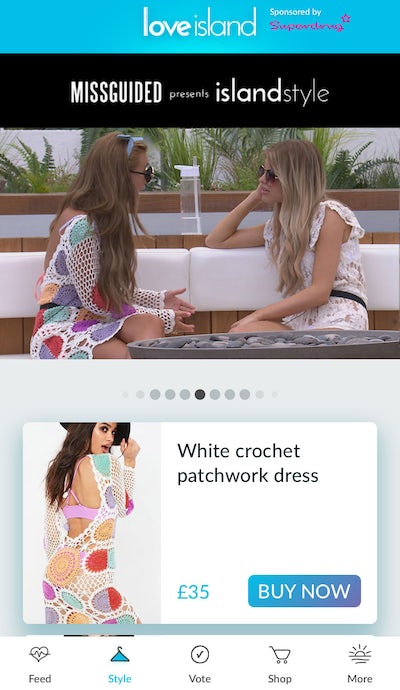 Viewers could shop looks directly from the app | Source: Courtesy

Missguided hit on a winning formula at a time when many rivals are struggling to get the attention of younger potential customers. Millennials and Generation Z consume more of their media via ad-free streaming services such as Netflix, making them harder to reach for marketers. By giving viewers instant access to the looks parading across their screens each night, Missguided managed to break through.

“It’s rare that we find a media property that reaches this customer in a way that is so consolidated, so impactful, and reaches them with such depth and engagement,” said Missguided chief customer officer Kenyatte Nelson. “From an advertising standpoint, it allows us to show up in an environment that’s highly relevant … and allow those who watch the show and aspire to have those fashion looks instant access, every day of the week.”

It helped that Love Island’s fourth season was also its most popular, averaging 3 million live viewers per episode, a figure that hit 5 million when including on-demand audiences. Nearly 75 percent of viewers were aged 16 to 34, a highly coveted demographic for advertisers.

Missguided ran conventional television ads throughout the series, built around the slogan “living your best life,” a phrase that took off on Instagram. On the Love Island app, a “Style” button took users to an interface that showed stills from the most recent episodes of the contestants wearing Missguided clothes, alongside links to shop for individual pieces.

ITV and Missguided did not disclose the financial terms of the partnership, but the average cost of a 30-second primetime Love Island advertising spot on ITV2 is about £50,000 ($65,000), according to a Bloomberg report.

The integration of shopping into the app was key to the campaign’s success, because it appealed to younger viewers and reduced the odds they would look elsewhere for similar clothes, said Samantha Dover, senior retail analyst at Mintel.

“When they are watching TV they are also highly likely to be using their smartphone,” she said. “The regular updates alongside new episodes tapped into the frequency that young people crave when shopping for fashion.”

The regular updates alongside new episodes tapped into the frequency that young people crave when shopping for fashion.

To ensure a fresh stream of new products, the Islanders’ wardrobes were refreshed throughout the show, with product drops arriving at the villa every few weeks. Islanders would look through the packs and choose which pieces they wanted to keep.

The partnership was a first for ITV, which had never integrated a fashion sponsor so thoroughly into one of its shows. The fact that Love Island was unscripted made the deal even riskier, said Claire Heys, ITV’s brand partnerships and content director.

A post shared by COMMITTED TO EMPOWERING ALL ⚡️ (@missguided)

Missguided used real-time data on how many people were visiting the app and its site while the show was airing, as well as what they were buying, to adapt their sales and marketing strategies on the fly. For example, the company started offering surprise promotion codes that would only be valid from 8 p.m. until midnight.

Nelson said that each morning the Missguided team would meet to discuss what worked and what didn’t the previous night. Just after lunch, ITV would brief them on who was wearing what in that night’s show.

“That was happening every day and we were getting better at it every day,” said Nelson.

In total, during Love Island’s run, 18 percent of Missguided sales came from product that was either worn by the Islanders, or similar looks the brand called “style steals.” Once an Islander wore an item on screen, sales routinely spiked 300 to 500 percent.

The Misguided project was quite genius.

Tribe Dynamics, a marketing technology firm that quantifies the dollar-value of digital content, or “earned media value” (EMV), found that the on-screen partnership gave the brand a boost on social media too. Six percent of Missguided’s EMV for the month of June referenced the reality show, while the hashtag #IslandStyle collected $1.2 million EMV in the same period. By comparison, #WorldCup accounted for 2 percent of Nike’s and 9 percent of Adidas’ June EMV.

The partnership broke through to an audience that’s increasingly jaded by sponsored content on social media or advertisements on television.

“When you think about influencer marketing and Instagram, everybody does it,” said Sharma. “How do you take that next step to create meaningful, targeted engagement and cut through? The Misguided project was quite genius.”