This month, our Spotlight shines on three former Nike employees who founded Wildfang to address the untapped demand for menswear made for women with a savvy mission-based, multi-channel approach.

PORTLAND, United States — Women have long taken styling cues from their male counterparts. Indeed, ‘borrowing from the boys’ has given rise to a range of perennially popular fashion products, from boyfriend jeans to brogues. But true menswear made to fit women is more rare. And yet, real demand for it exists, as two former Nike employees, Emma McIlroy and Julia Parsley, discovered when they launched Wildfang, a Portland, Oregon-based label dedicated to “modern-day, female Robin Hoods raiding men’s closets.”

“Emma and I happened to go shopping at Urban Outfitters. She was holding up a t-shirt and I was holding up a blazer. It was one of those blazers I had coveted my whole life, amazing with the elbow patches and super cool, but it wasn’t going to fit me. It was way too big and frumpy,” said Parsley, a petite brunette with a dramatic faux-hawk. “How could it be 2010 and I’d been wanting this blazer my entire life, but it still didn’t exist?”

Parsley was convinced that there were plenty of women just like her, who lacked a place to buy the tomboyish styles they had always wanted. McIlroy, a self-professed “brand marketing nerd” whose speech is still laced with the brogue of her native Northern Ireland, wasn’t so sure — but she wanted to find out. The two best friends embarked on a “quest for truth” to see if there was a market opportunity to bring tomboy style to underserved women. 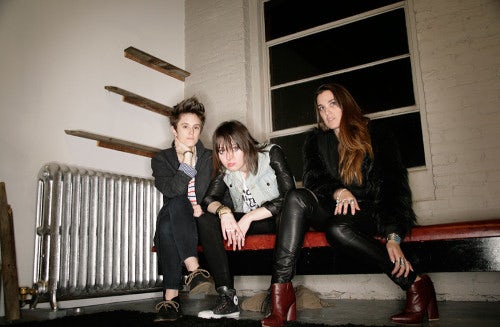 After confirming their hypothesis through years of market research, including personal surveys, the two left their Nike jobs in March 2013 to form Wildfang, which began life as a curated e-tailer with a robust content plan, a focus on social media outreach and a wider mission to become a destination for women who shared their sensibilities. In the first 30 days after launch, over 22,000 women subscribed to the website. Ellen DeGeneres and Kristen Stewart were early adoptors. And, in its first year, Wildfang generated just under $1 million in revenue.

“Wildfang is not a fashion thing or an online retailer. For me, I get really excited about giving a group of women an aspiration, a role model, something to inspire them to be better,” said Emma McIlroy, who is now both Wildfang’s chief executive officer and chief marketing officer. “That’s what I’ve craved my whole life and hopefully there will be other spaces even beyond product in the future that we can bring that to. For me, it was a brand marketing project. It’s always been in my DNA.”

The duo soon recruited creative director Taralyn Thuot, another Nike veteran with a background in visual merchandising and product development. Based on early success with a pilot shirt collaboration, Thuot added a private label collection to the Wildfang business. “One of the things that I think is so rich about Wildfang and our proposition is that it’s so sharp but it’s also so broad and diverse with the types of girls that we can capture,” said Thuot, who now oversees the brand’s several private-label collections based on heroine archetypes: the sophisticate, the jock, the rebel rockers, the fashion-forward streetwear stars, and so on.

All three used their richly diverse experiences at Nike to inform their strategy. “Everything I learned at Nike was how to be a great storyteller, how to build great content, how to engage and how to create an emotional connection with the consumer,” said McIlroy. Equally crucial, added Parsley, was “how important it is to have work you find meaningful and I think that that idea of a mission — I started to get really inspired by that.”

Another critical component of Wildfang’s strategy is its physical store in Portland, Orgeon, the result of a supportive landlord and vocal demand from local shoppers. Since its launch last August, the store has contributed 25 percent to overall revenue despite its off-the-beaten-path location. “We talk about ourselves as a family, so that was really important for us — to have a way for people to come in and really feel like they’re part of a family,” said Thuot, who drove the development of the store’s concept.

Anchored by a fort-like changing room in the shape of Wildfang’s triangle logo, the store is distinguished by playful, experiential elements. “We have a carving wall that also has our brand marketing, but we invite consumers to carve on our wall when they come in. That enables them to make their mark and feel like part of our family,” explained Thuot. “It’s a way for them to feel like they engaged with us even if they didn’t purchase something.” Feedback forms double as paper airplanes that award a 25 percent discount if shoppers can hit a target with them on the first try.

“It’s basic psychology. Anytime anybody interacts with something they feel more engaged and connected to it, so that’s a big component of our space,” said McIlroy, who studied experimental psychology at Cambridge. “We have girls who come in and have a PBR [beer] and carve in our walls for 45 minutes. And we love that. We’ll take those girls all day long, doesn’t matter if she buys anything or not, because that means she’s choosing to spend time with us and that means we’ve made the brand better.”

For this month’s Spotlight, Wildfang has designed a custom BoF logo incorporating its bold and graphic wolf mascot. “Every band of thieves needs a mascot and ours is the wolf. In so many ways it represents our 'tomboy' spirit: bold, intelligent, loyal and part of a pack,” said McIlroy.

Wildfang’s mission-driven, multi-channel model is similar to that of the highly successful fashion e-tailer Nasty Gal, which is set to open brick-and- stores and gained traction by cultivating a tribe of ‘bad-ass girls.’