With her androgynous look and aristocratic roots, the British model was one of the most recognizable faces in Nineties fashion. 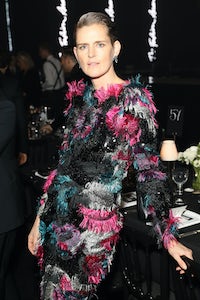 With her androgynous look and aristocratic roots, the British model was one of the most recognizable faces in Nineties fashion.

British model Stella Tennant has died at the age of 50. Her death was confirmed by her family in a statement to the PA news agency.

”It is with great sadness we announce the sudden death of Stella Tennant on 22nd December 2020,“ said the statement. “Stella was a wonderful woman and an inspiration to us all. She will be greatly missed.“ Arrangements for a memorial service will be announced at a later date, said her family.

There were “no suspicious circumstances“ surrounding the death, according to police.

Tennant, who was born in Scotland, was the granddaughter of the 11th Duke of Devonshire, Andrew Cavendish, and Deborah Mitford, one of the six Mitford sisters. She was discovered by Isabella Blow and began modelling in 1993 at the age of 22.

Her androgynous look, short cropped hair and aristocratic roots set her apart from more conventional models and she shot to fame after being photographed by the likes of Steven Meisel and Bruce Weber for magazines including the British, French and Italian editions of Vogue.

Soon after, she became a muse to Karl Lagerfeld — who cited her likeness to Coco Chanel — and worked with Chanel for more than 25 years.

“She was such an iconic and inspirational woman who embodied the modern spirit of Chanel through her independence, elegance and irreverence,” the French house said in a statement. “Her incredible beauty, both inside and out, was matched by her irrepressible wit and humour.”

She was also a runway regular for British labels Alexander McQueen and Burberry, and was photographed by everyone from Peter Lindbergh and Paolo Roversi to David Sims and Mario Testino.

Tennant married French photographer David Lasnet in 1999, a year after becoming pregnant with their first child and announcing her retirement. But she resumed modelling in 2001, and went on to design a knitwear line for Burberry. In 2012, she appeared with fellow British models Naomi Campbell and Kate Moss in the London Olympics closing ceremony.

In 2016, she joined forced with friend Isabella Cawdor to develop a women’s collection for the Chanel-owned gunmaker Holland and Holland.

Tenant was well loved in the fashion industry and her death has been met by an outpouring of emotion, with many taking to social media to pay tribute to the model. “R.I.P kind and wonderful Stella,” British Vogue editor-in-chief Edward Enninful wrote on Instagram. “My thoughts and prayers are with your family.”