NEW YORK, United States – Michelle Pfeiffer joined Instagram less than three months ago, but she’s already accrued the sort of large, highly engaged following that would make her the envy of even a seasoned influencer.

Her first post, a scene from her turn as Catwoman in Batman Returns, scored over 500,000 views, and as of Sunday, the Scarface and Dangerous Minds actress had 215,000 followers. She’s made no secret of why she suddenly decided to join the Instagram crowd: on Monday Pfeiffer launches Henry Rose, a line of five fragrance made with “clean” ingredients.

It’s become fashionable to declare the celebrity dead, at least when it comes to selling fashion lines and cosmetics. Glamorous, inaccessible movie stars who once moved perfume by the barrel are out, and “authentic” influencers with massive social media followings are in. In a sign of the times, around when Kylie Jenner’s Kylie Cosmetics was revealed to have surpassed the $400 million sales mark, CVS was pulling Salma Hayek’s beauty brand, “Nuance,” from shelves in December of 2017.

Pfeiffer is about to test whether old-school celebrity still has some life in it. The star has three Oscar nominations and near-universal name recognition. But recent Instagram success aside, she lacks the built-in audience many of her peers spent years cultivating before starting a business (Gwyneth Paltrow, for instance, wrote her Goop newsletter for several years before trying to sell anything).

“I started to see movement in other categories. Transparency was coming into play, and people were really looking at the safety of ingredients

“I started to see movement in other categories. Transparency was coming into play, and people were really looking at the safety of ingredients,” the actress told BoF last month on her motivation to launch a line of her own. “There was progress being made [everywhere] but fragrance.”

Until about a decade ago, celebrity-backed products were mostly licensing deals, where a star like Jennifer Lopez or Paris Hilton would slap their name on products made by anonymous manufacturers. Paltrow, Jessica Alba, Drew Barrymore and others discovered they could exert greater control — and potentially make more money — by turning their fame into full-fledged businesses. Alba’s Honest Company was said to be valued at under $1 billion at one point, and Barrymore is expanding her Flower Beauty brand into homewares. 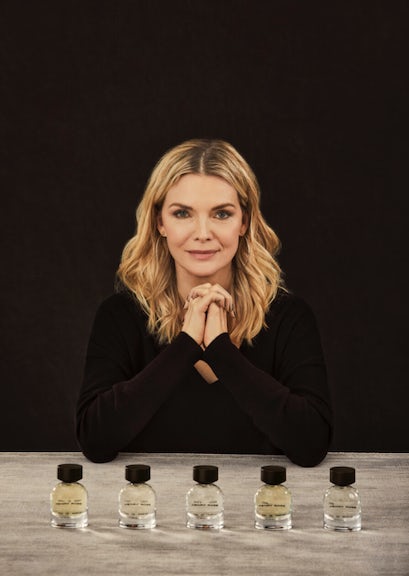 Pfeiffer is quick to underscore that Henry Rose is not a licensing deal. She is the founder of the company, which for the moment is made up of herself and Melina Polly, chief executive. Together, they oversaw the entire process, from concept to partnering with manufacturer International Flavors & Fragrances to ingredient sourcing, testing and packaging. Each of the five scents, named things like “Jake’s House” and “Dark is Night” after the actress’ “scent memories,” retail for $120.

With a clean fragrance, Pfeiffer also chose a product where she won’t be competing with dozens of other celebrities and influencers. The industry keeps the ingredients used to create scents under wraps, making it difficult to create a fragrance via a truly transparent production process. Makeup artist Gucci Westman and Beautycounter founder Gregg Renfrew have both called clean fragrance the next frontier in clean beauty, but neither has developed qualifying scents of their own.

Pfeiffer said she began thinking about the idea of creating a clean fragrance about nine years ago, but cosmetic companies were more interested in her famous name than her ideas.

“It was a dead end. Everyone said, and meant it, 'This idea of yours is dead in the water. No one is going to be 100 percent transparent,’” she said. “They could put my name or face on something I was unwilling to wear. I shelved it.”

About three years ago, Pfeiffer started working with the Environmental Working Group, a non-profit that advocates for the environmental safety and non-toxic goods, to determine which ingredients and processes she could use in Henry Rose. Off the list were commonly used ingredients such as phthalates used to make fragrances last longer, which have been linked to birth defects, and some artificial musks that are linked to cancer.

Ultimately her potential pool of ingredients was narrowed to 250, from about 3,000. Henry Rose is the first fragrance the group has endorsed.

“In most cases that hasn’t been done because companies have wanted to protect their intellectual property,” said Ken Cook, founder and president of EWG. “Fragrance houses haven’t wanted to disclose what ‘magic’ they’re bringing to smell.”

Pfeiffer’s recently started using social media in the lead up to the release of the beauty line, which she’s promoting with the catchy tagline, “the last black box of transparency.” The phrase was conceived out of frustration with a longstanding industry policy of not disclosing fragrance ingredients, she said.

The fact that Pfeiffer has largely stayed out of the social media world — and the associations with sponsored content — may work to her advantage. Her fanbase is still untapped, and potentially more willing to buy her products.

“No one comes to her to sponsor different things and she hasn’t used her brand equity for anything else,” said Clara Sieg, a partner at Revolution Ventures, a venture capital firm. “She’s a recognized brand but she’s not a recognized brand for pushing product so it makes you trust something that she’s built from the ground up.”

The response to her first few posts is a good sign, said James Nord, founder and chief executive of Fohr, an influencer marketing platform and agency that evaluates the “follower health” of brands and influencers.

Because Pfeiffer joined Instagram three months ago, all of her followers are new and therefore newly engaged in her content, he said. That engagement then leads the platform’s algorithm to serve her posts to a greater share of her audience than veteran influencers who have large portions of followers who have tuned them out.

“This is why what I call ‘legacy influencers’ stop being a good deal. Their audiences were built over the last five to seven years and they just aren't engaged. Then Instagram stops serving their content to their followers and it becomes this endless circle,” Nord said.

Still, consumers crave the personal connection they feel to influencers and celebrities on social media. The biggest brand launches are dominated by individuals with social media clout, who can promote their products on their feeds. Others partner with a big retailer from the start, including Barrymore with Walmart and Rihanna’s Fenty Beauty with Sephora.

Pfeiffer is selling Henry Rose through a dedicated e-commerce site rather than third-party retailers, and said she’s more interested in using her Instagram to tease her brand rather than post day-to-day minutiae. She’ll get the word out about the launch of through the media, she said. It may take more time for her fragrance to build a following in that case.

But not every celebrity brand needs to be an overnight success, according to David Olsen, chief executive of Cos Bar and former head of beauty at Net-a-Porter. Even in the digital age.

“The expectation is that it’s a rocket ship overnight… but if you look at Gwyneth Paltrow, it’s been ten years and she’s now hit it,” said Olsen. “The expectations are Kylie Cosmetics out of the gate and that’s a unicorn. Ninety-nine percent of the time it’s not the case; it’s a daily 24/7 project that you need to work on to make sure it's successful.”