The British supermodel is being recognised for her contribution to the fashion industry, including her efforts to increase diversity. 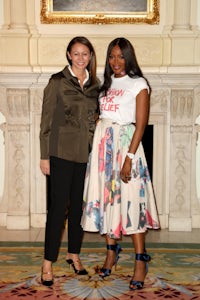 The British supermodel is being recognised for her contribution to the fashion industry, including her efforts to increase diversity.

“I was lucky with the opportunities I got and specially  the first black model to appear on the cover of French Vogue in 1988 which was a very special privilege," said Campbell in a statement. "But after that, it was quite a long gap, so I never forget how much work there is to do still in respect of diversity and equal opportunities."

South London-born Campbell was scouted in Covent Garden in 1986. Over the past three decades, has appeared on the covers of more than 500 magazines and in advertising campaigns for luxury brands including Chanel, Prada and Louis Vuitton, often making history by being the first black model associated with those publications and brands.

An outspoken diversity advocate, Campbell made waves in 2017 when she called out former British Vogue Editor-in-Chief Alexandra Shulman for posting an Instagram photo of an all-white editorial team. “She needs to look at that picture and see that it’s clearly not diverse,” Campbell said during an interview with BBC Newsnight yesterday. “A child could see that.”

She also praised Shulman’s replacement, British-Ghanaian editor Edward Enninful, who regularly features numerous black models and has worked to diversify Vogue staff. “To see more than one woman of colour on magazine cover is a big deal, but it really shouldn’t be," Campbell — who is currently a contributing editor at British Vogue — told BBC Newsnight. "It’s not a trend.”

Campbell’s philanthropic endeavours include Fashion for Relief — initially one of the first fundraisers helping those affected by the UK floods in 2007 — which has since raised millions for causes that include the Haiti earthquake and Hurricane Katrina. Campbell was also involved in charity work with Nelson Mandela, who in 2007 named her “Honorary Granddaughter,” and is an activist of female empowerment, headlining the Forbes Woman Africa’s Leading Women Summit and co-producing Arise Fashion Week in Lagos, Nigeria.

“She has achieved exceptional work in the industry,” said Caroline Rush, Chief Executive of the BFC. “Naomi represents female empowerment, activism and glamour and her voice is used for great impact.”

Why Edward Enninful Will Be Good for British Vogue