Decades of poor management and cheap overseas competition brought the once booming Scottish knitwear industry to its knees. Today, with a new end-consumer focus and artisanal manufacturing, there is newfound confidence in Hawick and the border mill towns of Scotland.

HAWICK, United Kingdom — Summer is short lived in Hawick, or ‘Hoik’, as the Scottish Borders town is pronounced by the locals. All too quickly, the icy tendrils of their hard and dark winter envelope Roxburghshire, with the frigid ferocity expected in an area just 250 miles south of Norway. Spring is a long, bleak time coming, but, eventually, invariably, it comes.

This meteorology is a fitting analogy for the fortunes of the Scottish knitwear and cashmere industry, for which Hawick is ground zero. The industry didn’t begin in earnest until 1771, following the arrival of four knitting frames, but by 1845, more than 2,000 of Scotland’s 2,605 knitting frames were located in the Borders. Hawick alone housed half of them. Even today, the impact of those machines on the town and its inhabitants can be seen everywhere; in the fine cobbled streets, buildings clad in mottled stone and the town hall, a resplendent example of Scottish baronial architecture.

But as is the case with so many single-industry towns, globalisation forced the local industry to compete along entirely new parameters. In its heyday, the Scottish knitwear manufacturing industry employed more than 9,000 locals. Today, fewer than 1,000 people continue to work within the industry ecosystem. Many of these jobs were lost to overseas competition.

“When I started at Pringle in 1991, they employed about 2,200 people in the company and had a big factory in Hawick,” said Angela Bell, owner and designer of cashmere brand Queene and Belle and formerly a senior designer at Pringle of Scotland. “Pretty much everything was produced there, [but] then over the nine years that I was there, there were a lot of changes.” 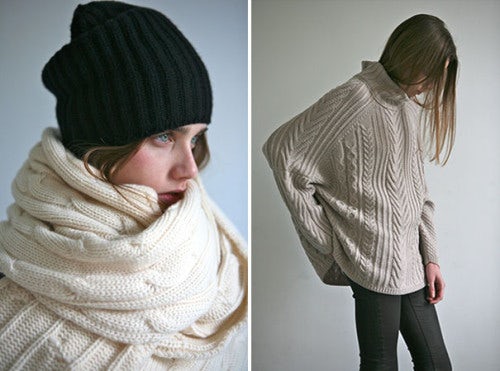 “When I left there were loads and loads of people being made redundant. They were doing a lot of outsourcing to Mauritius and to China and a bit in India as well. The knitwear was starting to get produced overseas and not so much in Scotland,” she continued.

Pringle of Scotland closed its main factory in Hawick in 2008, however the brand does still produce in the area, outsourcing the production of its medium and coarse gauge cashmere pieces to local firms. Its Chinese owners, the Fang family, have invested significant sums into the business despite its poor results. Last November, the company registered its seventh consecutive year of pre-tax losses, reporting a £6.35 million loss for the year, as sales dropped 30 percent to £5.91 million.

Other local players have not possessed such deep pockets. Caerlee Mills, which created cashmere products under the Ballantyne brand, widely regarded as one of the best in the world, turned off its machines in 2013. Although the Ballantyne brand was sold just prior to liquidation, no buyer could be found for the iconic mill, which was founded in 1788.

“I think the people here just couldn’t quite get to grips with how to come out and make the change for positivity. The whole brand thing was starting to emerge in the early nineties: the beginning of Gucci getting itself together; Burberry. Companies around here just didn’t know how to approach that. It took its time, basically. It sort of had to go through that process of people not knowing what to do – and now only the best ones, with the best business practices and products, [have] survived,” said Bell.

“The industry has changed enormously. It is much smaller in size, in terms of numbers employed, compared to what we had at one time. We don’t really have any companies now that are volume-based manufacturers operating at the cheaper end of the market. They have all decamped to the Far East and they are not going to come back,” said David Breckenridge, chief executive of the Scottish Textile and Leather Association (STLA).

“[Pringle] were basically doing big runs, with a lot of lambswool knitwear. It wasn’t high-value yarns like cashmere or anything; they were competing on price. I think that in the end that’s what got them into difficulty. In the end, they weren’t making any money,” added Bell.

However, the departure of volume-based manufacturers has enabled the remaining industry to find a more focused, unified identity. “What we do have is a strong industry that is very much at the high end of the market and we are finding that some manufacturing is coming back at that high end, where you are talking really expensive garments,” Breckenridge continued.

In 2012, Chanel’s investment arm, Paraffection, acquired long time supplier Barrie, one of Scotland’s most historic mills. The company was facing serious financial difficulties and came close to shutting down, putting at risk a key element in the supply chain for some of Chanel’s most iconic knitwear.

“The investment by Chanel was a terrific endorsement of the quality of Scottish knitwear and Scottish manufacturing. I think that was a huge boost to everyone in Scotland. It has been a very positive thing,” said Breckenridge.

Later that same year, Chanel’s Métiers d’Arts show, an annual celebration of the craftsmanship of company’s partners, was staged in Edinburgh, placing Scottish heritage and the skills of its craftsmen in the global spotlight. Creative director Karl Lagerfeld’s fantastical take on tartan and highland moor romance made the front page in every key market.

Since acquiring Barrie, Chanel has emphasised a consumer-facing strategy that positions Barrie as a brand in its own right. Lily Collins was cast in a high profile campaign shot by Karl Lagerfeld. A dedicated Paris store opened in June and a second London store is already in the works, in addition to 40 wholesale doors. Bruno Pavlovsky, president of fashion at Chanel, has said previously: “The visibility we have built up in the last 18 months with Barrie is amazing and we need to fulfil the demand and continue to develop. This is not a one-year development; it is 20 years and more. This is the beginning of something.”

But Chanel is not alone in emphasising a strong brand identity while leveraging Scottish knitwear expertise in a contemporary context.

“Made in Scotland often feels like shorthand for something traditional or heritage at the expense of relevance,” said Buffy Reid, co-owner and designer of &Daughter, a modern luxury cashmere and knitwear brand made in the Scottish Borders and the west coast of Ireland. The business is only in its first year of trading, but has already been featured in British Vogue and secured 10 premium stockists in the UK, Ireland and Japan. 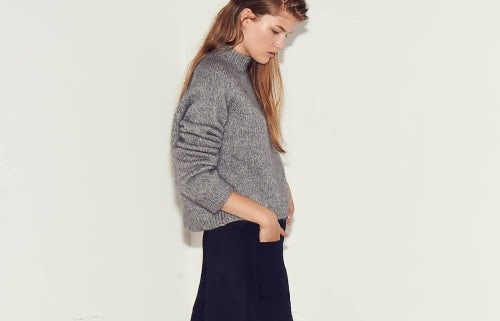 “For &Daughter, making our knitwear in Scotland and Ireland is absolutely integral to what we do. However, we don't intend to market ourselves on that basis alone because the product itself always comes first,” she continued.

Bell of Queene and Belle, known for its intarsia and graphics, which are extremely popular with Japan’s sophisticated consumers, concurred.

“On a recent trip to Japan, I gave a presentation of the fact that I am based here on a farm and that the factory is only seven miles away. It cemented the story and they feel that it is something a bit different from a big global brand. They are getting something unique and special and personal. I sell a lot into the Japanese market and they love the fact that it is made in the UK, but it is also the quality and the attention to detail and the quirkiness.” 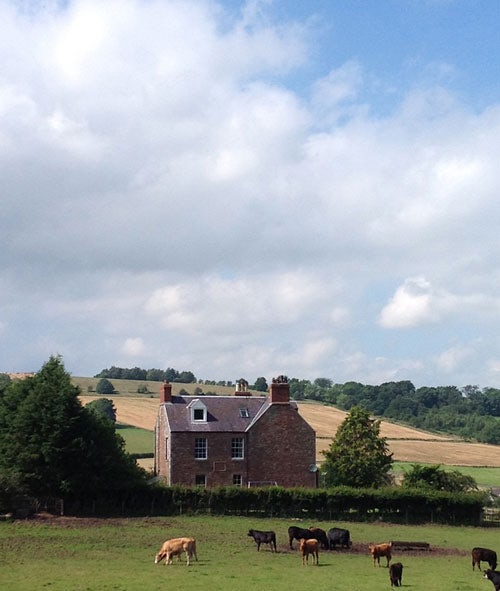 Breckenridge believes this new focus on branding is a promising solution for the industry’s survival. “There is no doubt that having your own brand in the marketplace is a much better place to be, than relying on supplying private label customers. Scottish companies have, over a long period of time, built up very, very close relationships with many luxury brands and that is valued greatly. It is not necessarily bad news that you are selling to Hermès, Louis Vuitton or Chanel, but, what we need is a balance and I think that is gradually coming about,” he continued.

The knitwear industry is one of Scotland’s biggest economic assets, and the seventh largest exporter in the country — and will be of considerable importance to the nation if it votes to become independent in the upcoming referendum. However, there is a real threat of a wider skills shortage as Scottish knitwear expertise disappears with an ageing workforce.

“If you look at the age profile of employees in the industry, it is at the higher end. There is no question that we would be losing skills, so it is extremely important that we attract young people into the industry, to ensure that they are properly trained in the skills that are going to go quiet,” said Breckenridge.

Bell believes the focus on consumer brands and the impact of the Chanel acquisition will only have a positive impact on the attractiveness of the industry. “I think if you get some of the businesses becoming a bit more higher profile it makes people think, ‘Oh it is not such a bad thing after all, maybe I could be involved even if it is at the factory level.’”

Not surprisingly, Breckenridge and the STLA are proactively trying to fill the skills gap before it develops into a fully-fledged crisis.

“We have put together a skills strategy and action plan for the industry, which addresses what the major skills needs will be. It centres very much around things like the modern apprenticeship programme, which the industry has bought into very extensively. It is all about knowledge transfer and there is a lot of other aspects going on, such as leadership, marketing. We are addressing the skills needs of the industry and that is going to be very, very important,” added Mr Breckenridge. “We are planning for the future; we are planning for a good future.”

Editors Note: A previous version of this article incorrectly stated that Pringle of Scotland manufactured most of its products outside of Scotland.
Most read articles